September 25, 2017 - Comments Off on Twitter Transparency Report, January – June, 2017: An Uptake in Requests by the Government

Twitter Transparency Report, January – June, 2017: An Uptake in Requests by the Government

Incursions onto free Speech, particularly with reference to the internet, are on the rise, creating a climate of fear and oppression for social media activists and bloggers, ultimately resulting in self-censorship. Pakistan is ranked 139 in the World Press Freedom Index 2017 and classified as “Partly Free” by Freedom House in 2016. Furthermore, Pakistan’s request to social media companies for information and content removal is increasing at an alarming rate. This rise comes in light of the fact that Pakistan has passed the cybercrime legislation, ostensibly to prevent misuse of freedom in online spaces, that has raised concerns in terms of right to free expression and privacy.

Pakistan also made 7 requests to Twitter for the removal of 24 accounts between July to December last year, compared to 24 removal request for 82 accounts in the first half of 2017. 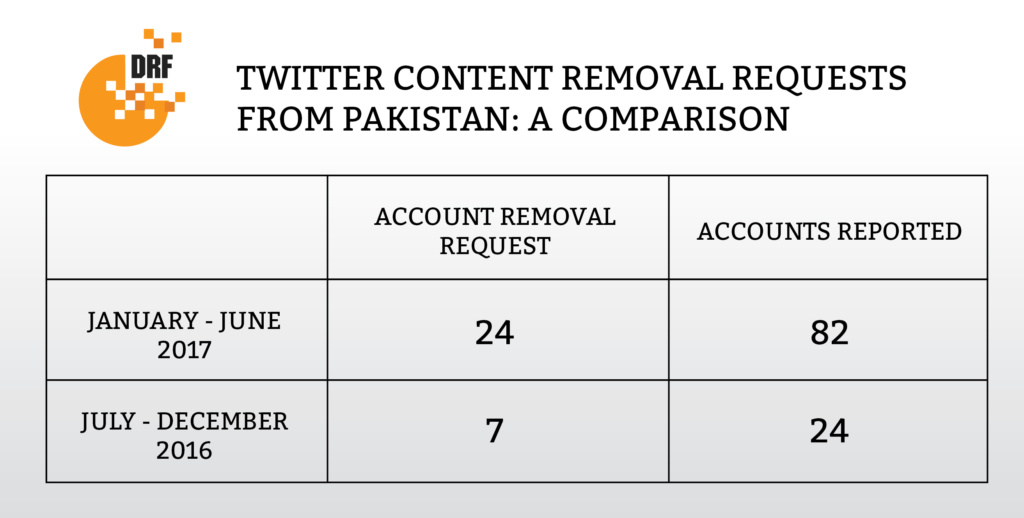 The report demonstrates more than a twofold increase in the first half of 2017, for much too obvious reasons.

Foremost, since the promulgation of the Prevention of Electronic Crimes Act 2016 (PECA), the situation has only deteriorated. It places new curbs on free expression and legitimate internet usage under which mere criticism of the military, judicial system and religion can lead to imprisonment. Further, it has resulted in increased government surveillance and monitoring of bloggers, providing them with no accountability or redress.

In early January, 5 bloggers from different cities were allegedly abducted for questioning the political influence of the establishment and speaking up for the rights of religious minorities.

This was followed by another crackdown on social media activists in May for posting anti-state content and maligning its institutions, military in particular.

Presumably, such practices may have potentially contributed to the increase of Government’s request to Twitter. They demonstrate the abuse of the space that we have given up by allowing laws such as PECA to pass and to encroach on our rights.

Interestingly, Twitter declined all requests for account information and removal of accounts and claimed that it did not remove any account or provide any data to the government as opposed to a global trend which saw Twitter suspending more accounts than ever before.

Although, the nature of the requests made by our Government are unclear but none of the 24 removal requests made were legal requests or in the form of a court or legal order, therefore, questioning the legitimacy of requests and potential abuse of power by law enforcement and security agencies.

This shows that the lack of transparency by our Government in relation to the process and selection criteria of requests demonstrated by the absence of judicial oversight could have potentially led to Twitter’s refusal.

On the contrary, Brazil and Turkey made 15 and 715 content removal requests respectively, to Twitter in the form of court orders and successfully got 15% and 11% of the reported content respectively, removed.

Therefore, it is time our government applies similar checks and balances primarily to prevent the intelligence and security agencies from the use and abuse of arbitrary powers vested in them by legislations such as PECA.

It is urged that prior to making information or content removal requests, potentially infringing constitutional rights of Pakistani citizens, a mandatory court order based on clearly defined rules should be required and only in extremely exceptional cases requiring urgent action, should it be exempted.