January 11, 2022 - Comments Off on The Minds of the Women Behind “Digital Rights and Feminist Futures” : A Comic

The Minds of the Women Behind “Digital Rights and Feminist Futures” : A Comic

As 2021 drew to a close, established freelance journalist Zuha Siddiqui and talented Illustrator, Aziza launched a project they had been working on for what has now been over 2 years in the making. 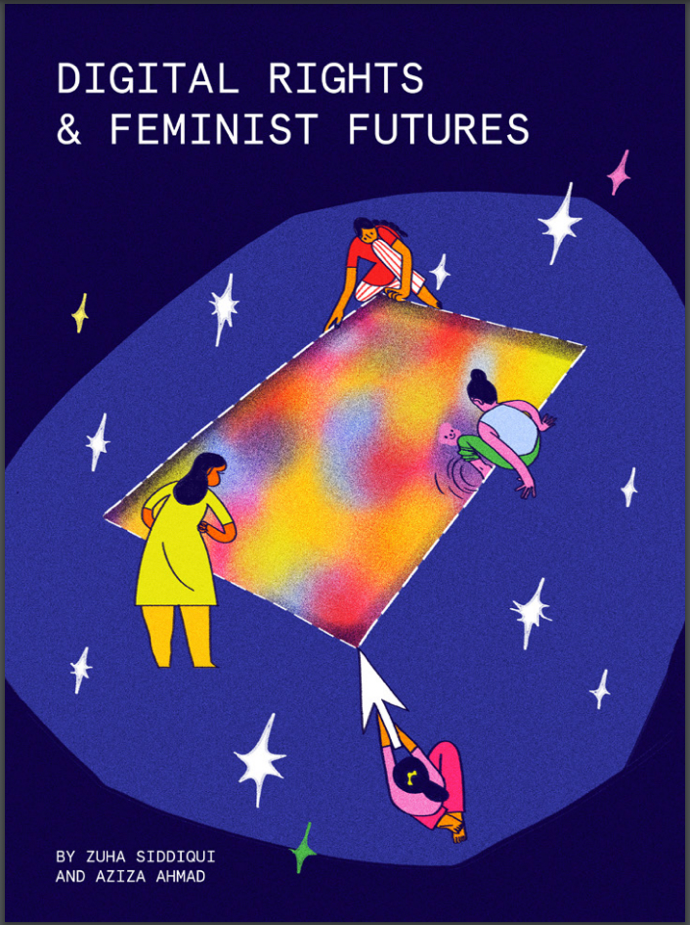 The comic is a visual and imaginative treat, masterfully telling the story of the humble originals and challenging beginnings of Nighat’s family. Even though viewers and sceptics may believe they know the basics of Nighat’s life history; an ambitious young woman who set out to achieve more and dreamt the dream of a feminist movement rooted in the Digital space, the comic is sure to surprise its readers, whoever they may be.
The comic is imbued with personal anecdotes and instances that were monumental in shaping the trajectory of Nighat’s life, and it reads like a story with a well thought out plot. This is because Zuha spent hours speaking to Nighat via Zoom and learned in great detail about her life, her passion for Digital Rights, and the pain-staking journey that has been the inception of Digital Rights Foundation and the subsequent Cyber Harassment Helpline which has been the first of its kind in the region. 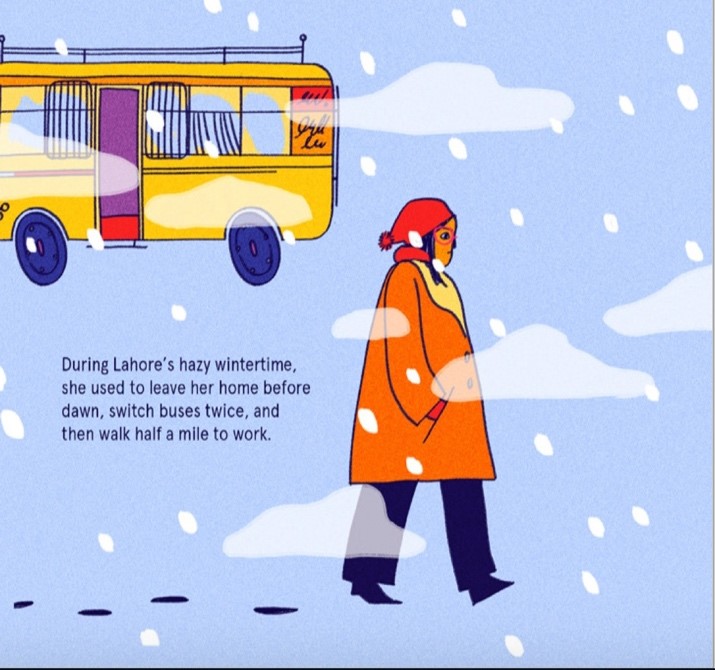 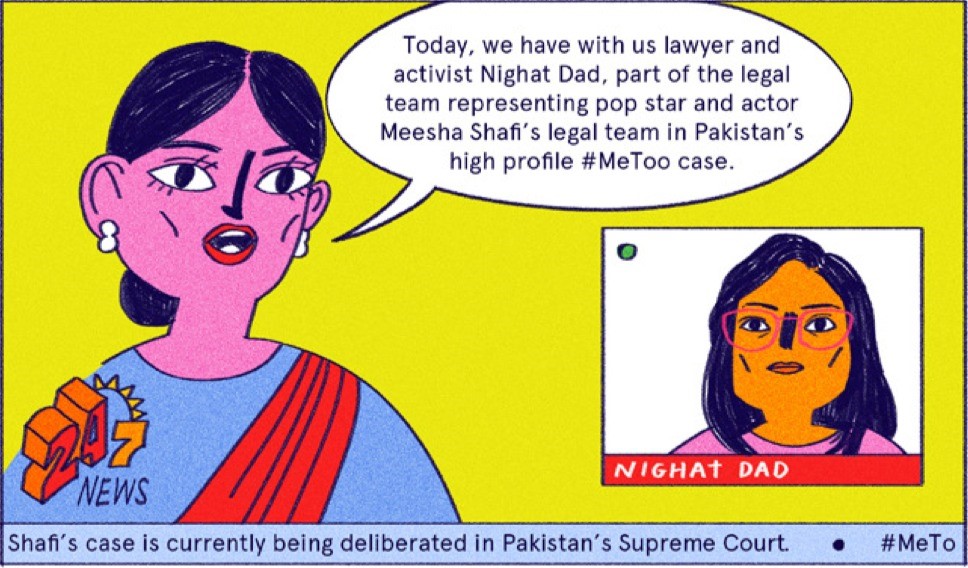 *Excerpts of illustrations from the Comic

When speaking to Zuha and Aziza about the comic after its initial release garnered a lot of positive attention and feedback, we learned that Zuha had a meticulous process that allowed for her research and subsequent writing of the comic to be well researched and authentic.

Zuha set out researching all about Digital Rights in Pakistan, the pioneers of feminist movements, and spoke to several resourceful contacts that provided her with useful information. She then got into contact with Nighat (even though for the purpose of her work, she would have preferred meeting her subject in person and immersing herself in Nighat’s world and surroundings).

Once the research was done, and the narrative of the story had been laid out in front of her, Zuha took Aziza on board: an exceptionally talented and creative illustrator who owed all of her success in beautifully illustrating such a crucial story to the creative process that her and Zuha embarked on together.

They created a story board, went through the story in depth, and started bringing it to life visually. Aziza’s imagination and drawing prowess coupled with Zuha’s passion for documenting and telling important stories eventually created the brilliant comic which came to be known as “Digital Rights and Feminist Futures”

When speaking to these talented women about why they chose this particular story to tell, and what motivated them to embark on this project, the answer was simple:

“We wanted to create an archive”

An archive of movements and of stories. Stories of women who are spearheading movements in Pakistan. Women who are increasing awareness about Digital Rights and all that the Digital space has to offer. And women who are doing it with the interest of creating space for other women and gender minorities and setting out a path that others can tread on. Not just in the digital sphere, but well beyond that as well. 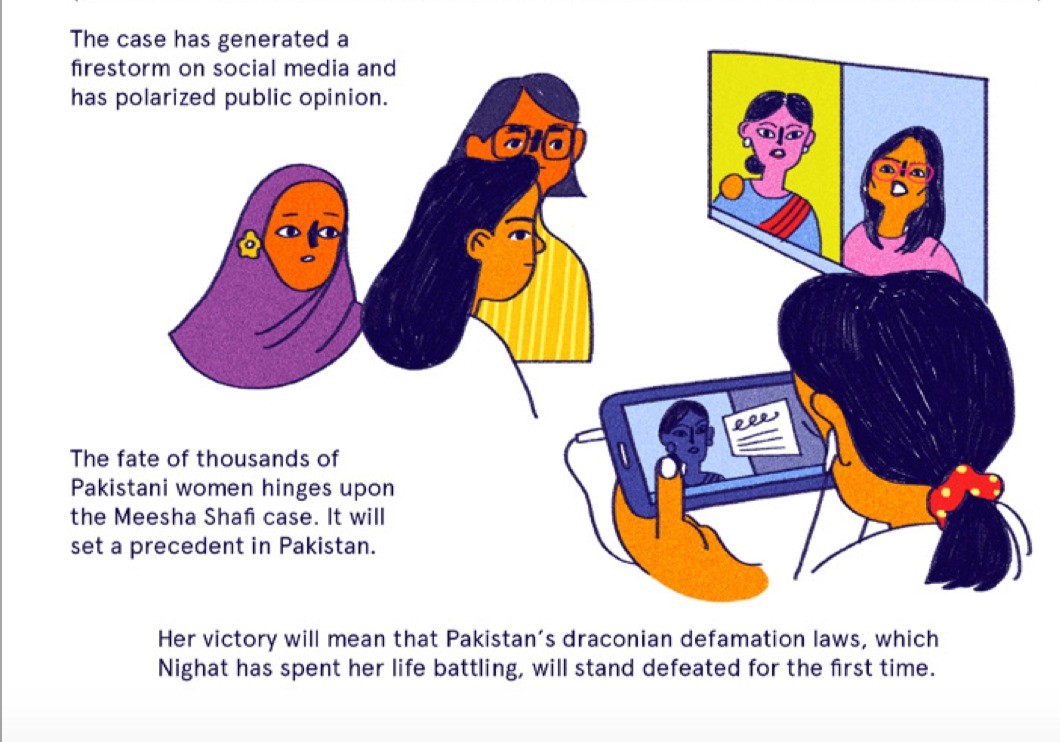 As for the person in question, Nighat was blown away by the heartfelt and beautifully captured depiction of her story. Reading the comic which summarizes decades of hard work and struggles to work on a mission she believes in, left her speechless and extremely overwhelmed with appreciation for the efforts made by Zuha and Aziza. 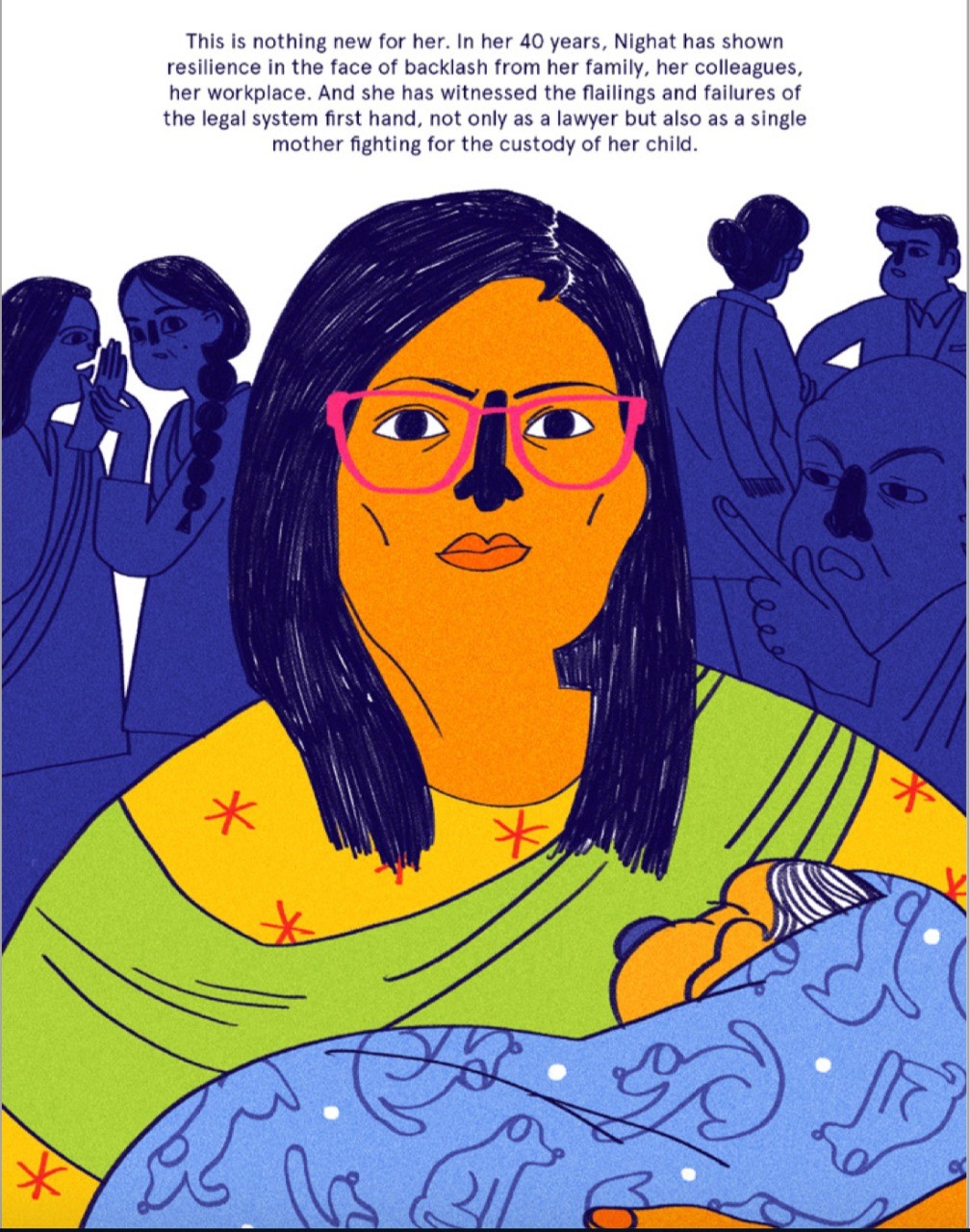 The image above is an illustration of Nighat at a crucial moment in her journey to becoming who she is: holding her newborn son and becoming aware of the limitations and flaws of the legal system that is supposed to uphold our rights.

The comic is an honest, heartfelt, and inspiring true story that humanizes its subject and her difficult journey while becoming one of Pakistan’s household names.