December 20, 2017 - Comments Off on The Cyber Harassment Helpline Completes One Year of its Operations

The Cyber Harassment Helpline Completes One Year of its Operations

As the Digital Rights Foundation’s Cyber Harassment Helpline completes its one year, the team compiles and releases its first one-year report. The report [PDF] contains data collected by the Helpline which highlights the nature and extent of the problem of online harassment. The Report also contains recommendations for public bodies to improve their institutional response to online harassment. 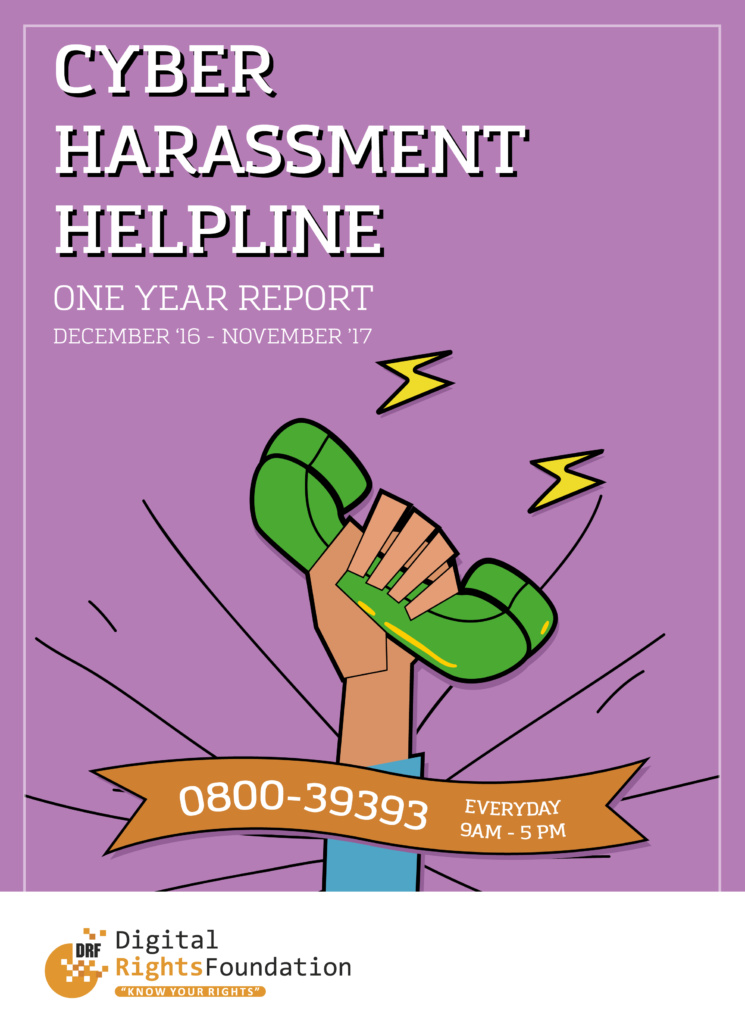 The Cyber Harassment Helpline was launched on December 1, 2016 and is Pakistan’s first dedicated helpline addressing issues of online abuse and violence by providing a free, safe, gender-sensitive and confidential service. It provides legal advice, digital security support and psychological counselling to victims of online harassment. The toll free number [0800-39393] is available during 9am to 5pm.  Nighat Dad, the founder and Executive Director of DRF, explained that “the Helpline aims to fill the gaps of service delivery to complainants and victims of online harassment--to do what law enforcement and other organisations cannot--while paying special heed to gender-sensitivity and mental health."

This report marks the one-year milestone of the Helpline. During its first year, the Helpline has received 1,551 complaints in the form of calls, emails and Facebook messages from December 1, 2016 till November 30, 2017. The Helpline has so far received a total 1476 calls on its toll-free number. The Helpline was originally only operational on the weekdays, however in August, it was expanded to seven days a week to meet the needs of its callers. This has resulted in an increase in the average number of monthly calls from 82 in the first six months to 123 by November.

67% of the calls at the Helpline were by women, whereas 33% of the callers were men. Facebook remains the most widely reported platform, with 45% of callers experiencing harassment there. Among the kinds of harassment reported, complaints of fake profiles, non-consensual use of information, blackmailing, and unsolicited messages were the most common ones.

The Helpline has strict privacy and confidentiality policies in place, and only non-personally identifiable information is collected from our callers with informed consent. While 19% of the callers did not want to disclose their location, we were able to identify that most of our callers on the Helpline were from Punjab (50%). The Helpline also received calls from Sindh (18%), Khyber Pakhtunkhwa (5%), Balochistan (2%), Azad Kashmir and FATA (1%) and the Federal Capital, Islamabad (5%).

Building on this data, the Digital Rights Foundation has put forward some recommendations for the government and law enforcement agencies to improve the reporting mechanism regarding cyber harassment. There is an urgent need to build the technical and financial capacity of the National Response Center for Cyber Crime (NR3C), FIA to deal with complaints in a timely and satisfactory manner. The Investigation Officers (IOs) and Prosecutors need to be trained in cyber crime law, internet governance, criminal procedure and trauma counselling. The FIA is also urged to fulfil its obligation under section 53 of the Prevention Electronic Crimes Act 2016 to submit reports to Parliament and ensure that this report is public. We recommend that the FIA forms a separate desk for addressing online harassment with female IOs and gender-sensitisation training. Lastly, the FIA is urged put in place case management and tracking systems to ensure an accessible complaint registration procedure and effective follow-up on cases.