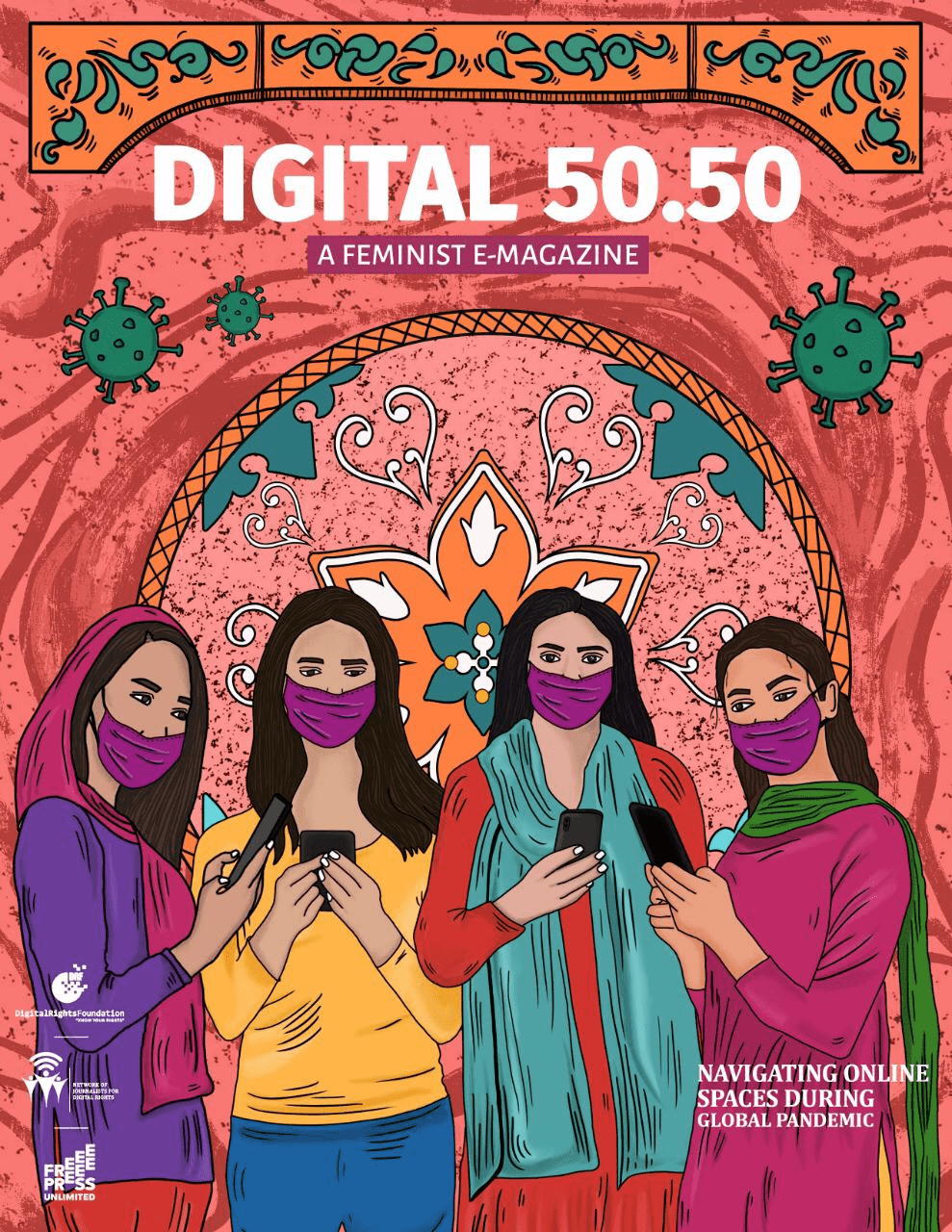 Third Edition of DRF’s feminist e-magazine was launched in September. It covered articles on how individuals and organisations have been navigating the digital spaces during the global pandemic. A very interesting article discussed the transition of civil society organisations and people from other professions to working in the digital. Another article used Taylor Swift’s songs from her new album, Folklore, to talk about dating apps during the lockdown period and is a must read. The magazine can be accessed here.

UN Women A to Z of Cyber Harassment

DRF with the support of UN Women conducted an awareness raising campaign on online violence through social media posts for three months which also included dissecting cyber harassment and its myths through A to Z of cyber harassment. The posts are available on DRF’s Facebook page and Twitter.

While hearing a jail petition for leave to appeal in the case titled 'Muhammad Abbas vs The State', the Supreme Court of Pakistan made observations regarding honour killings in the country. DRF’s campaign ‘#NoHonourInKilling’ aims to shine a light on this and highlight some of the most powerful sections of the order. 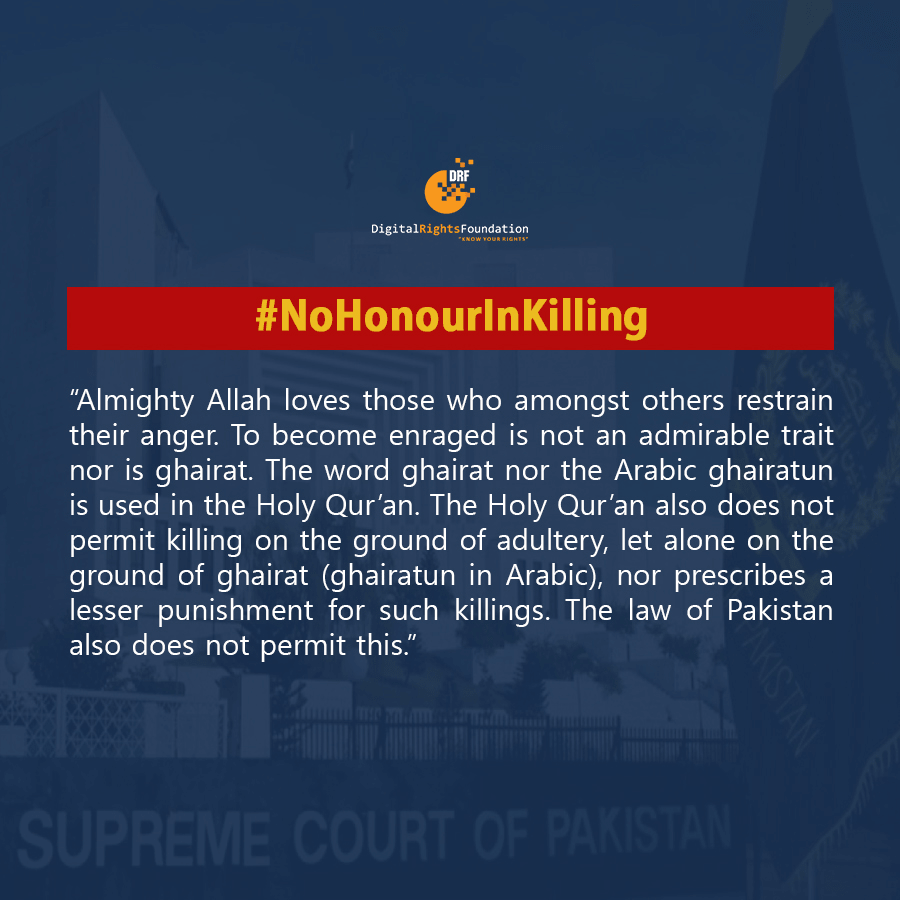 #PrivacyIsARight: A Digital Campaign for VPNs 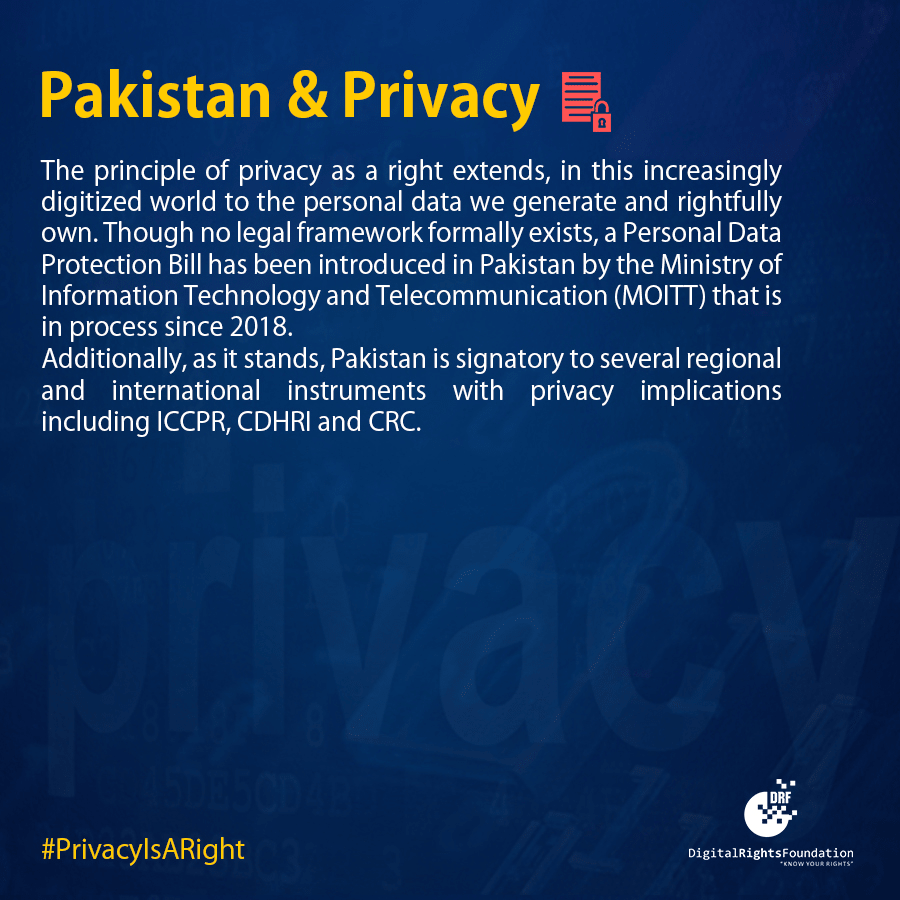 DRF conducted an awareness raising campaign through social media on the right to privacy in Pakistan’s context. This included a week-long series of posts discussing encryption, VPNs and details of international treaties with privacy implications that Pakistan is signatory to, as well as a panel discussion titled ‘Understanding VPNs: A Deep Dive into Privacy in Pakistan’. This was cast live via DRF’s Facebook page and is available for viewing there.

DRF has launched the #ActivismInPandemic campaign highlighting the important work human rights defenders and journalists have been doing during COVID19. The campaign aims to share experiences of journalists and HRDs during the pandemic and also highlight the importance of managing work and stress during these testing times.

We spoke to Sumaira Ashraf Rajput, a digital journalist, about the impact of #COVID_19 on her daily working schedule. @sumaira_rajput#ActivismInPandemic pic.twitter.com/QrnhnhHG7z 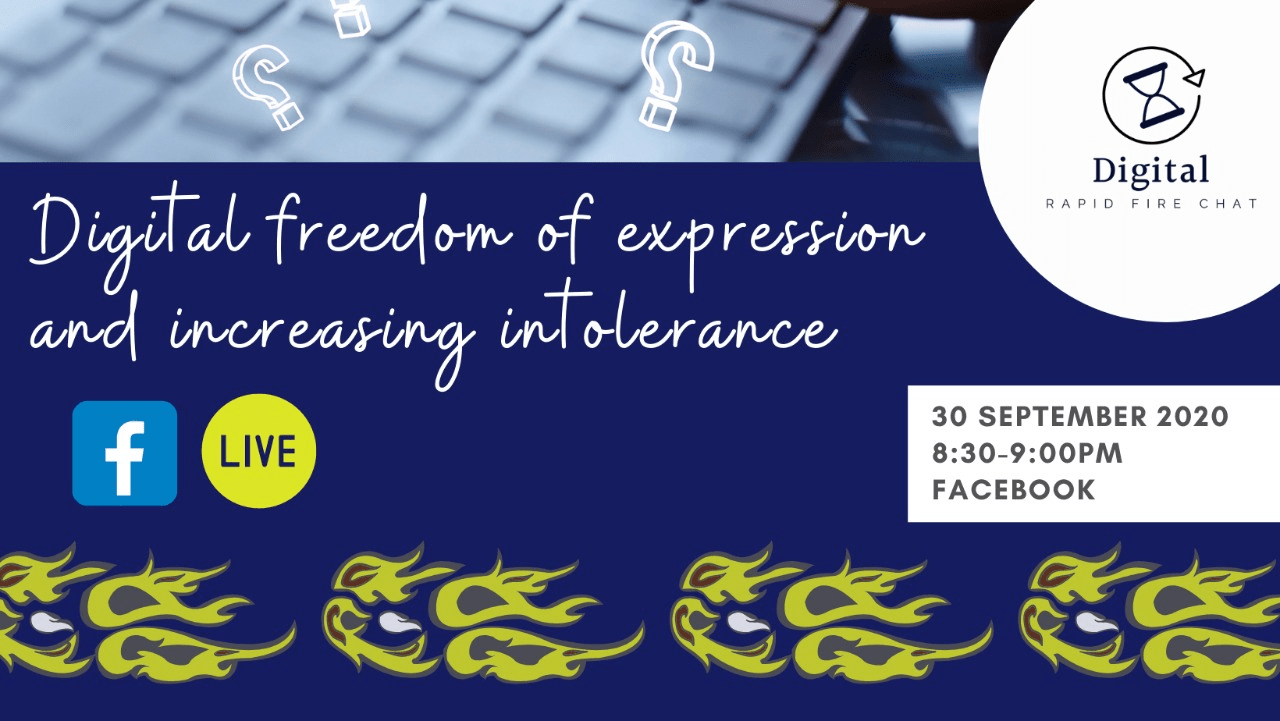 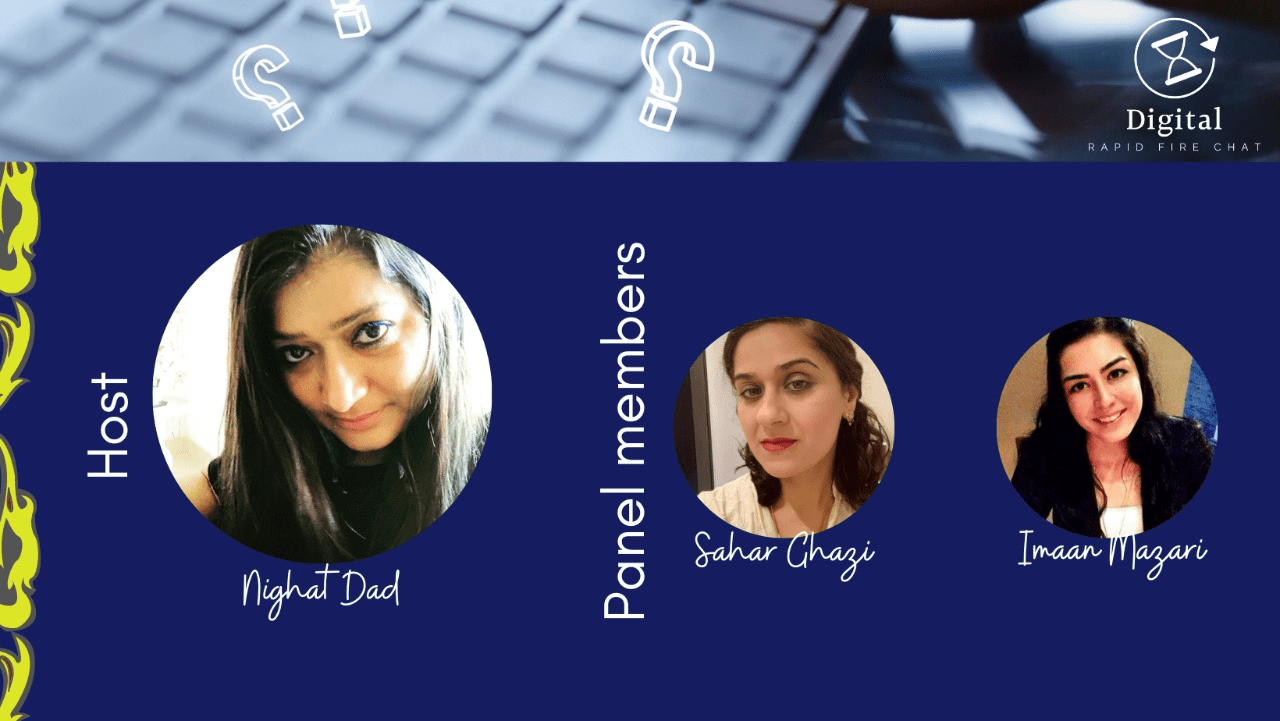 DRF launched a new initiative, Digital RapidFire Chat, to discuss issues around online freedom of expression and press freedom in the country. The Digital RapidFire was based on the idea that with the lockdown and the digital space being loaded with talk shows, workshops and webinars, DRF wanted to create a space where panelists could discuss serious, and heavy-loaded issues in a fun, interactive way and through some 'burning questions' that also reduces the cognitive load of the audiences. The first Chat was scheduled for 11th September, for which the decided format could not be implemented as the Motorway rape incident happened so the topic was changed to “Ab Aur Nahin: Ending violence against women's bodies”. For the second Chat, we asked questions from our panelists on  “How feminists in Pakistan deal with online hate?”. A hamper from our team was sent to the panelist who answered more questions, and unmasked the truth behind these issues in a non-triggering and humorous way. 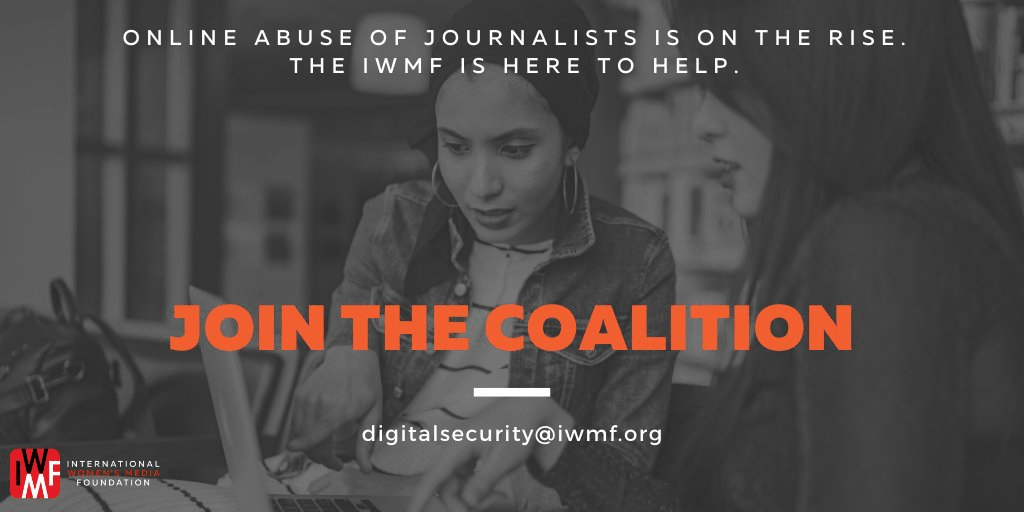 DRF has joined the coalition with International Media Foundation which focuses on working on journalist safety online and offline. The coalition and DRF has been raising a voice and condemning against online harassment and attacks on journalists during COVID19.

The Adal Aur Sehat Project and DRF collaborate for a session on Cyber Crime Laws, Prevention and Remedies 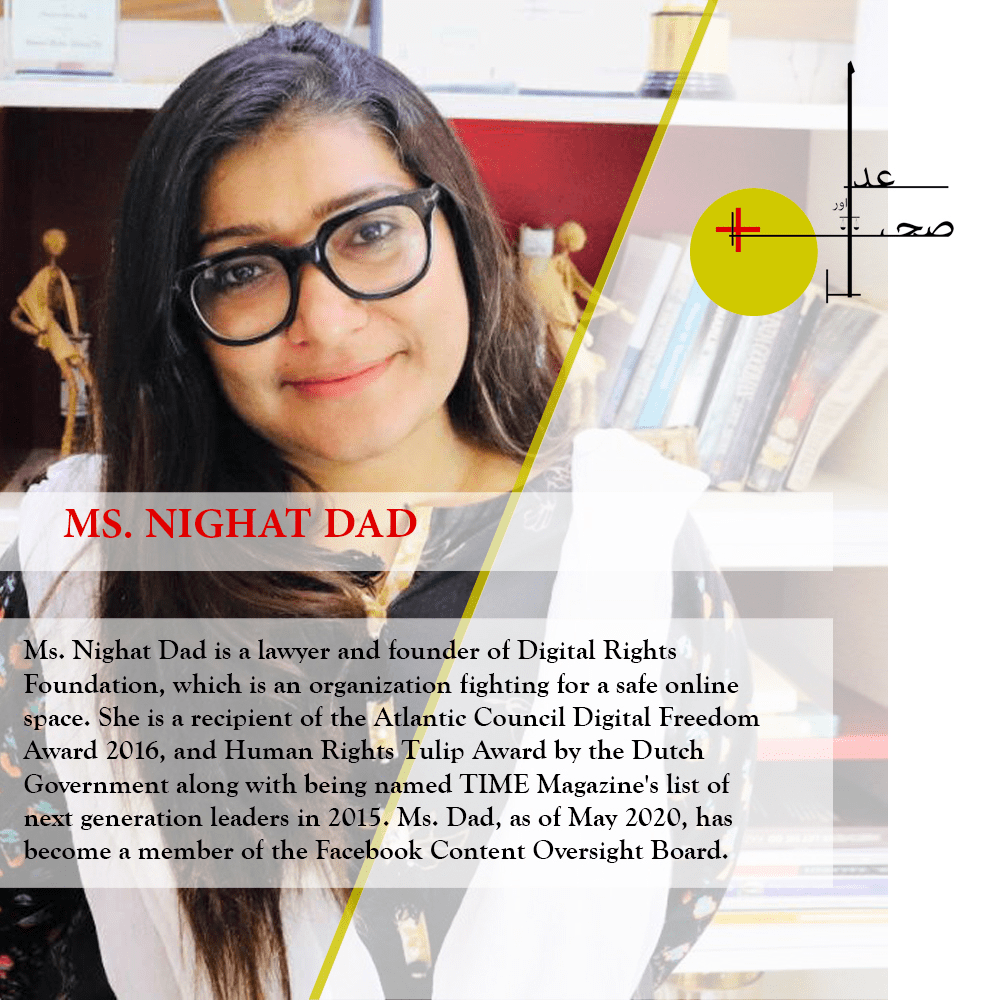 DRF collaborates with the Adal Aur Sehat Project in a session focusing on Cyber Crime Laws, Prevention and Remedies for the masses. DRF’s Nighat Dad spoke to Adal aur Sehar on the topic and highlighted the legal remedies available to people to counter cyber crime in the country.

Cyber Harassment Helpline received 309 complaints in the month of August. In comparison to the previous months during lockdown, this number has decreased. It shows that there was a spike in the cases of online violence especially blackmailing through non consensual use of information and images during lockdown which has now decreased a little. Another observed trend is of social engineering through which people are coerced into sharing their personal details like National Identity Card number, WhatsApp code, bank account details and, e-wallet details making them susceptible to hacking and financial fraud. 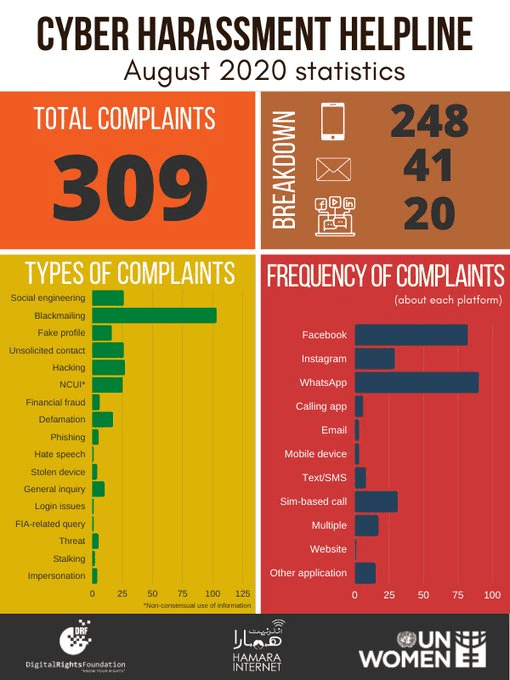 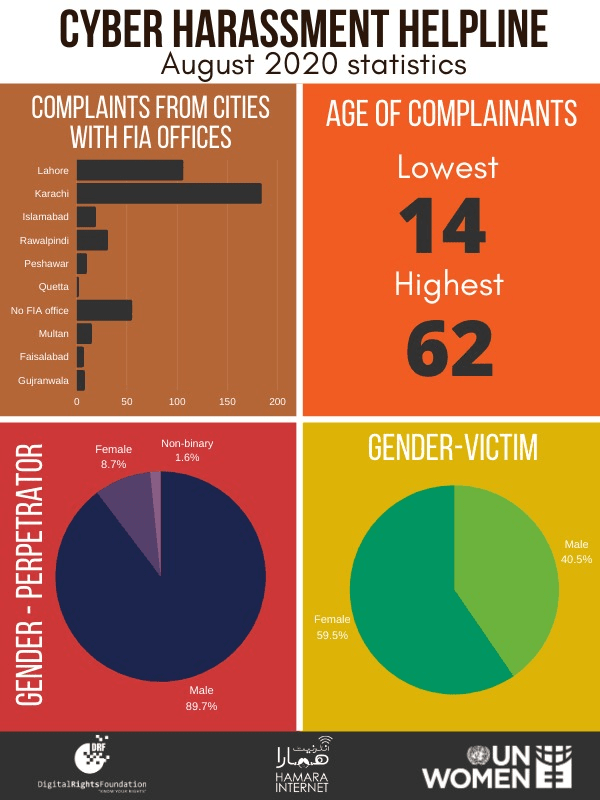 The decrease in complaints for the month of August is explained here. It is important to remember that even though numbers dropped, it doesn’t mean cyber harassment is not an issue. We still have to be on the lookout. #MehfoozInternet #HamaraInternet pic.twitter.com/PMggI3IIg6

Network of Women Journalists for Digital Rights issued a statement to strongly condemn the murder of Shaheena Shaheen and demands that there should be adequate follow-up by the state to ensure that the accused is prosecuted and a possible settlement does not impact the prosecution. The statement was signed by around 60 journalists and three women journalists’ coalitions. It can be accessed here.

New Controls on the Internet in Pakistan

DRF’s Nighat Dad spoke with Lord Tariq Ahmad of Wimbledon on how important it is to strengthen free media and tackle intimidation of female journalists.

The UK is working with Pakistan in its efforts to strengthen a free media and tackle intimidation of female journalists. Really interesting to hear from talented journalists on #MediaFreedom and other issues. Media Freedom is an important UK priority. pic.twitter.com/tsSUzg6fpG

Data Privacy and Public Health – All Fair in Love and War? 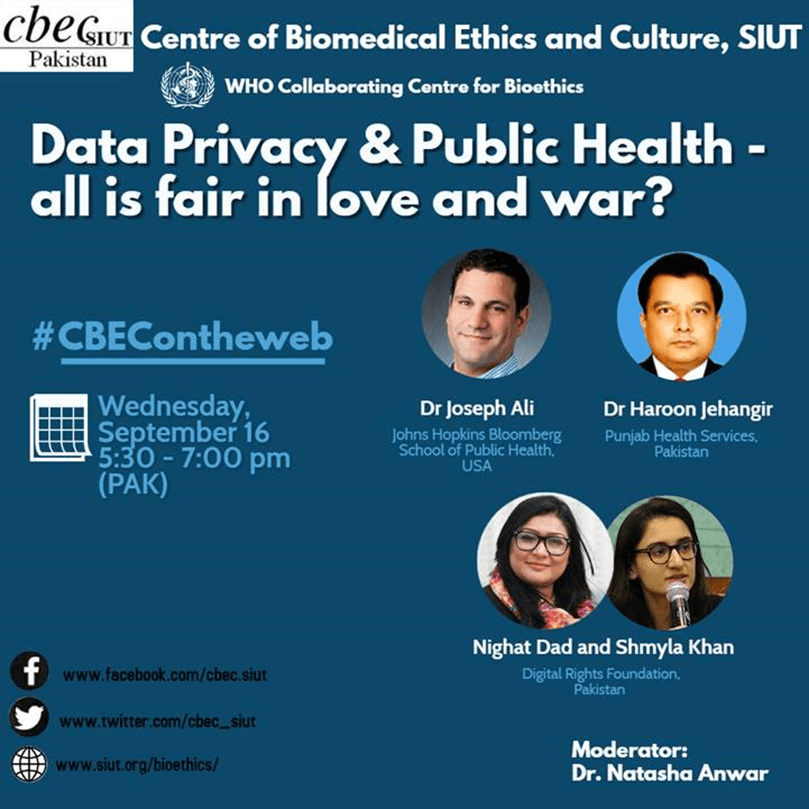 DRF took part in a webinar in collaboration with the Centre of Biomedical Ethics and Culture (SIUT). The webinar sought to focus on the use of private health data during public health emergencies raises ethical concerns, especially in Pakistan where oversight and regulation of such processes is questionable. The webinar explored the following questions: 1) Do healthcare establishments (private and public) understand what is at stake when private health information is being shared/ monitored? 2) Does the public fully understand it? 3) Are public health officials and government departments cognisant of the consequences of these technologies? 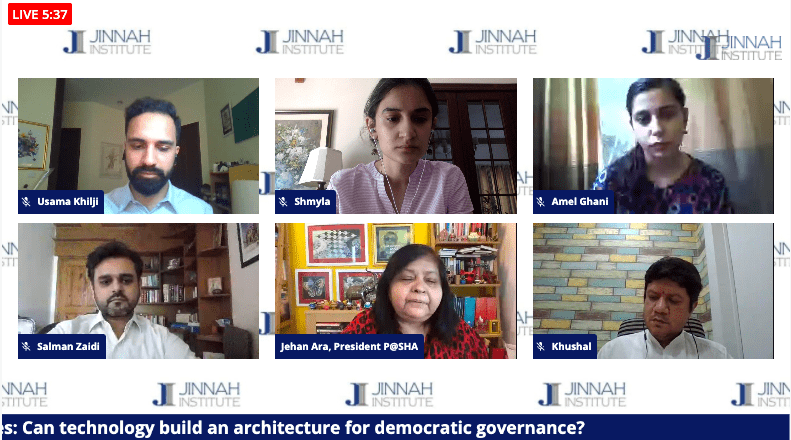 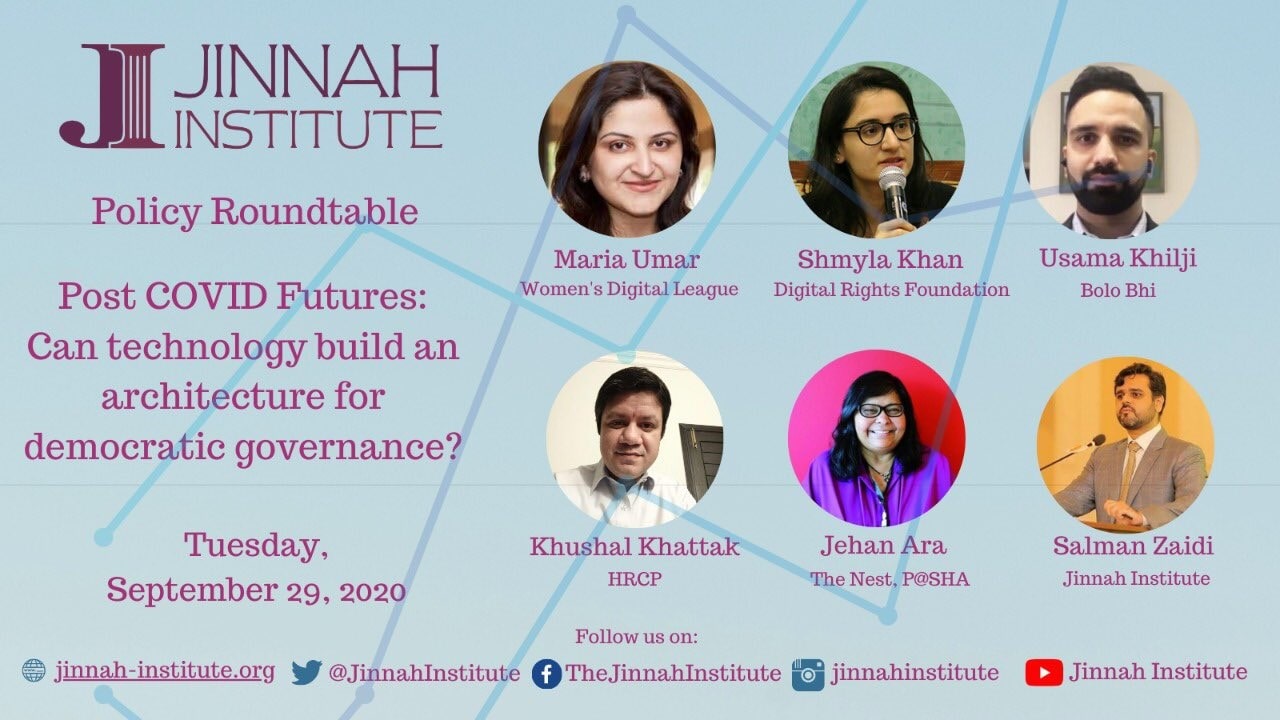 DRF participated in a policy roundtable on the role of technologies in a post-Covid future on September 29th, exploring issues of access and the role technology plays in democratic governance. The roundtable included experts from the tech and media industry as well as members of civil society.

DRF team member, Arslan Athar, took part in an IAF Seminar, “Making Magic”, which was an intensive training about digital facilitation and online campaigns. The seminar was a week long, with participants from all over the world, and experts from the field of event and campaign management coming in to speak to the cohort.

The FNF organized a visiting program on "Propaganda, Automation and Digital Politics" which was conducted digitally from the 7th to 10th September 2020. 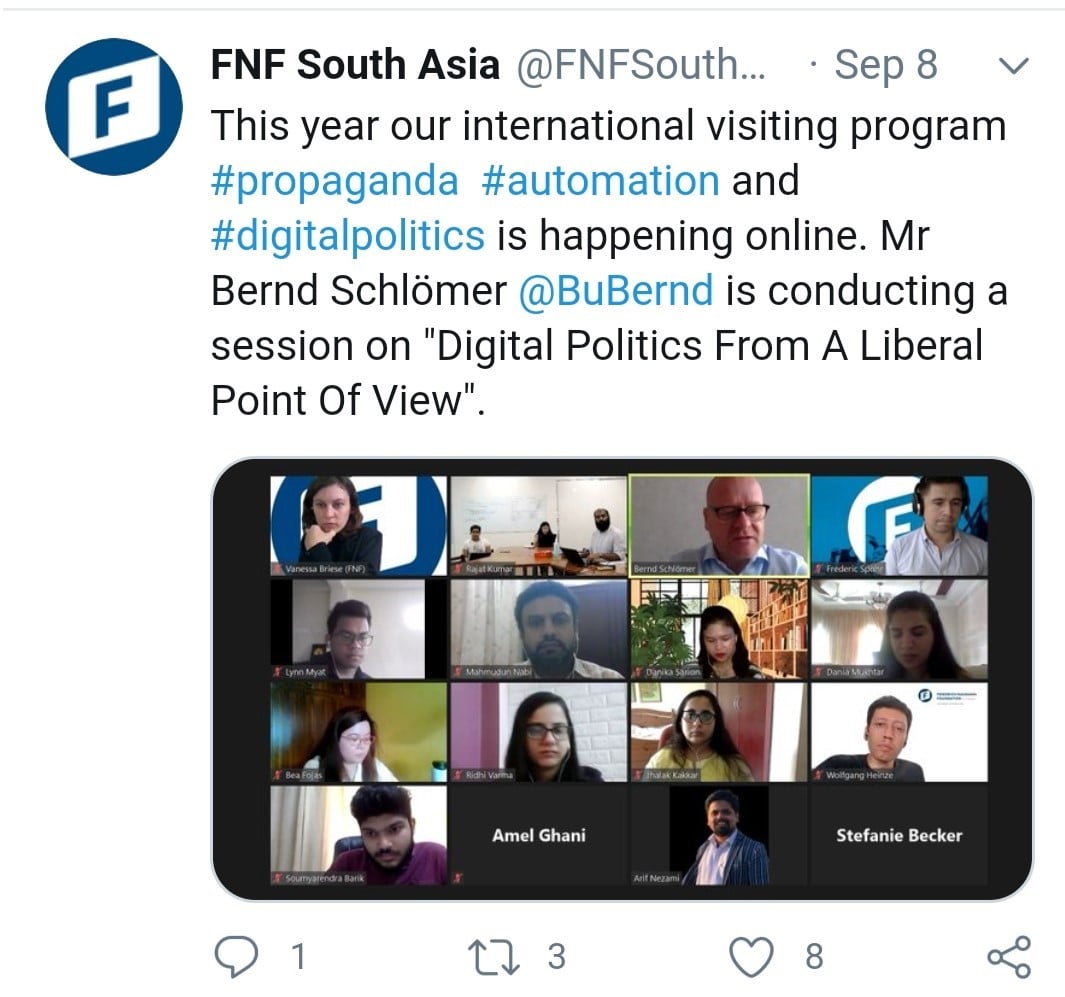 “Has The PTA Swiped Left On Love?”

DRF spoke to Atiya Abbas, who wrote for our feminist e-magazine, Digital 50.50, about her experiences speaking to people to Tinder for research. Following the ban on Tinder and other dating apps in Pakistan, we asked Atiya about the effects of the ban on Pakistani society and what Tinder really meant to a lot of people, who used it for networking, rather than just dating. 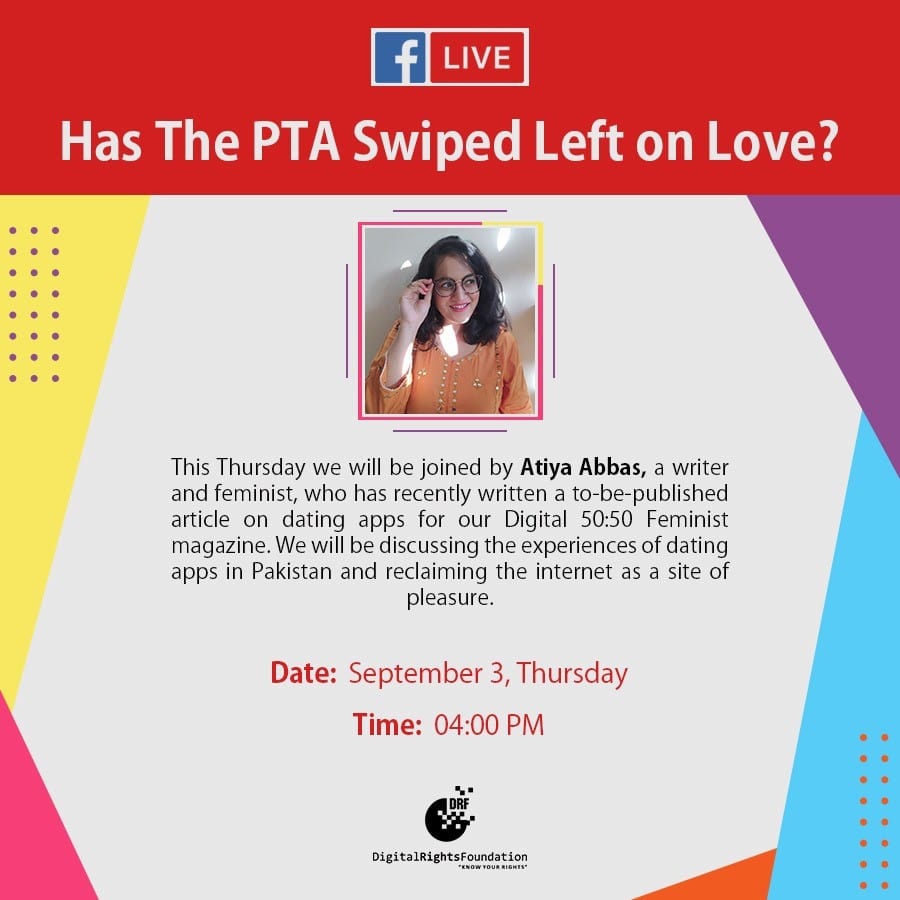 DRF’s Cyber Harassment Helpline conducted a series of webinars ‘Deconstructing Cyber Harassment’ with the support of UN women to discuss digital safety practices, legal remedies and psychological impact of online violence. Our DRF team of expert guest speakers each contributed their unique experiences and expertise; focusing on strategies for listeners to better protect themselves to reduce risk and vulnerability in the backdrop of increased harassment and violence offline and online. 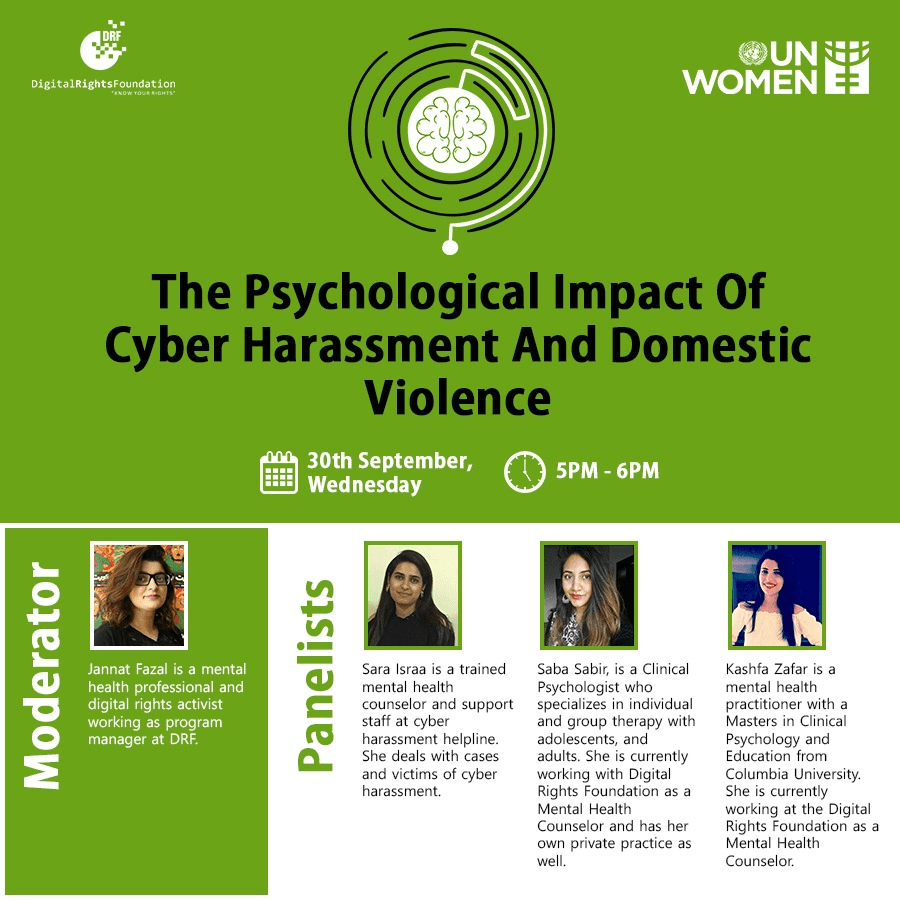 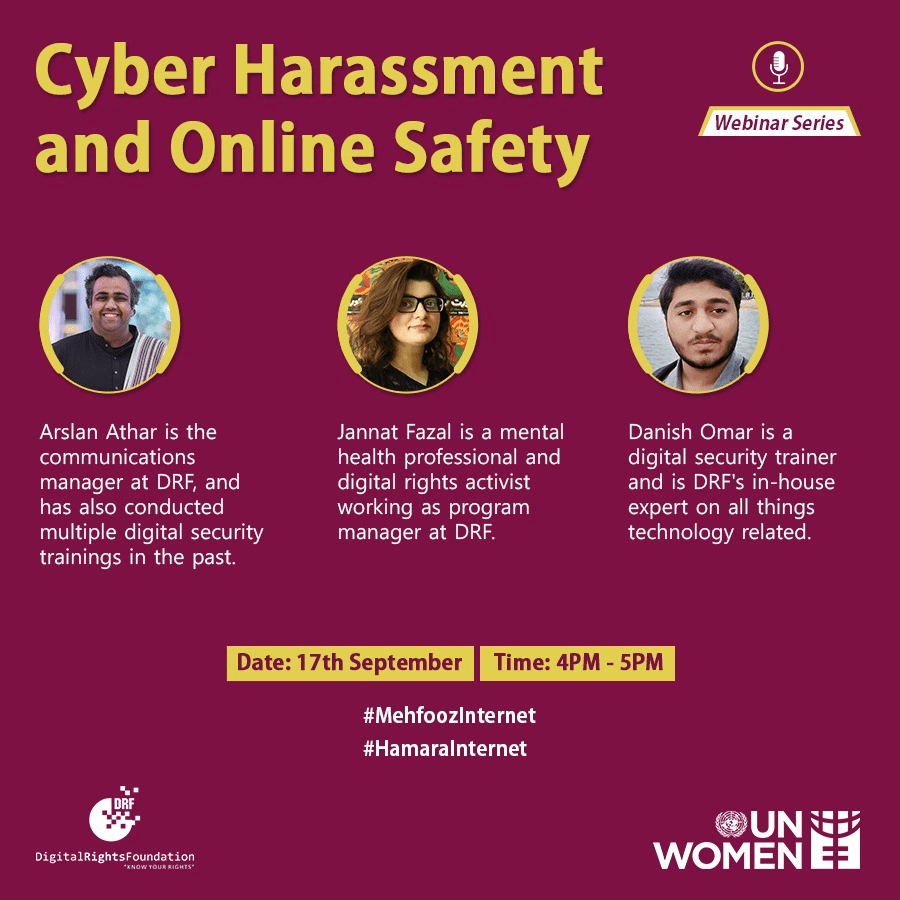 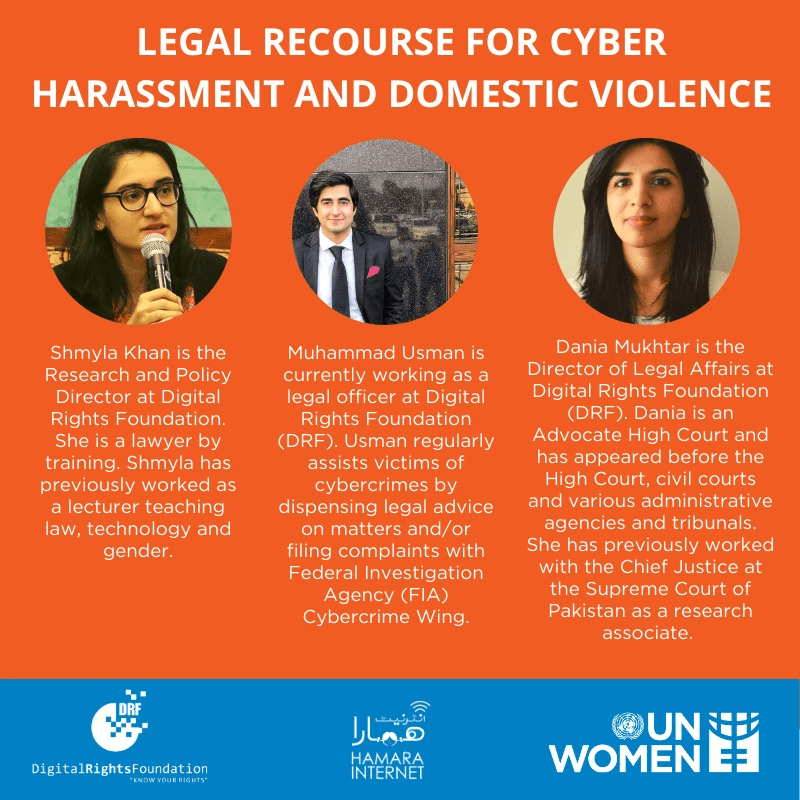 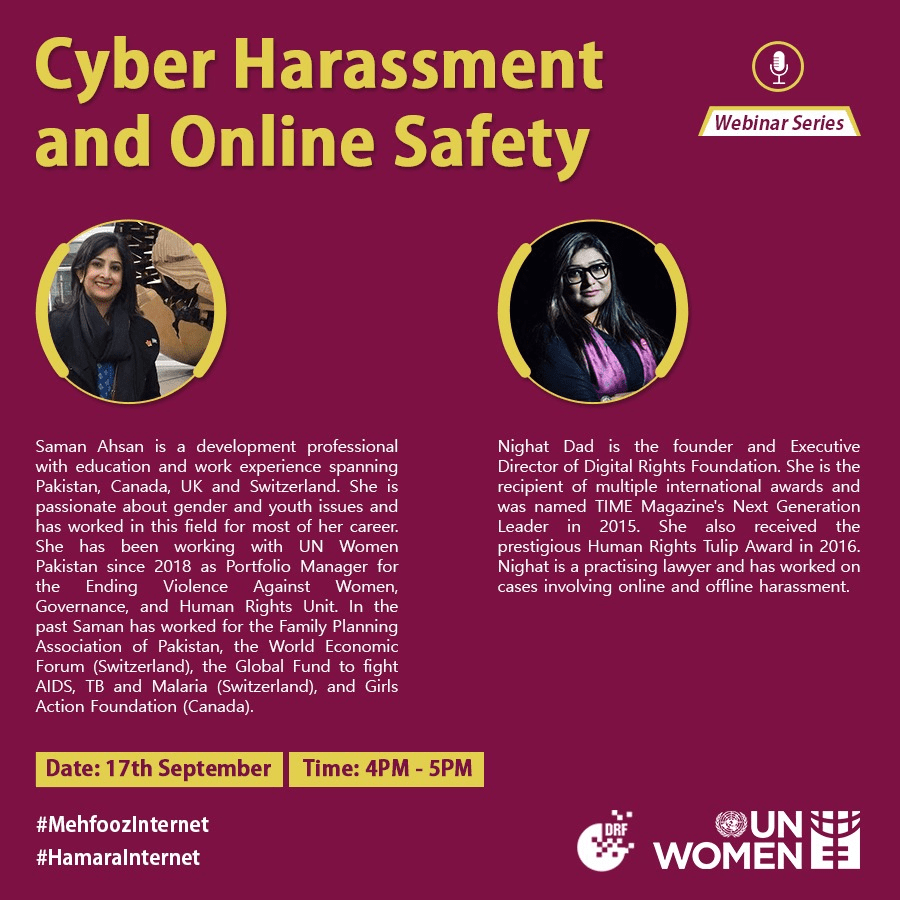 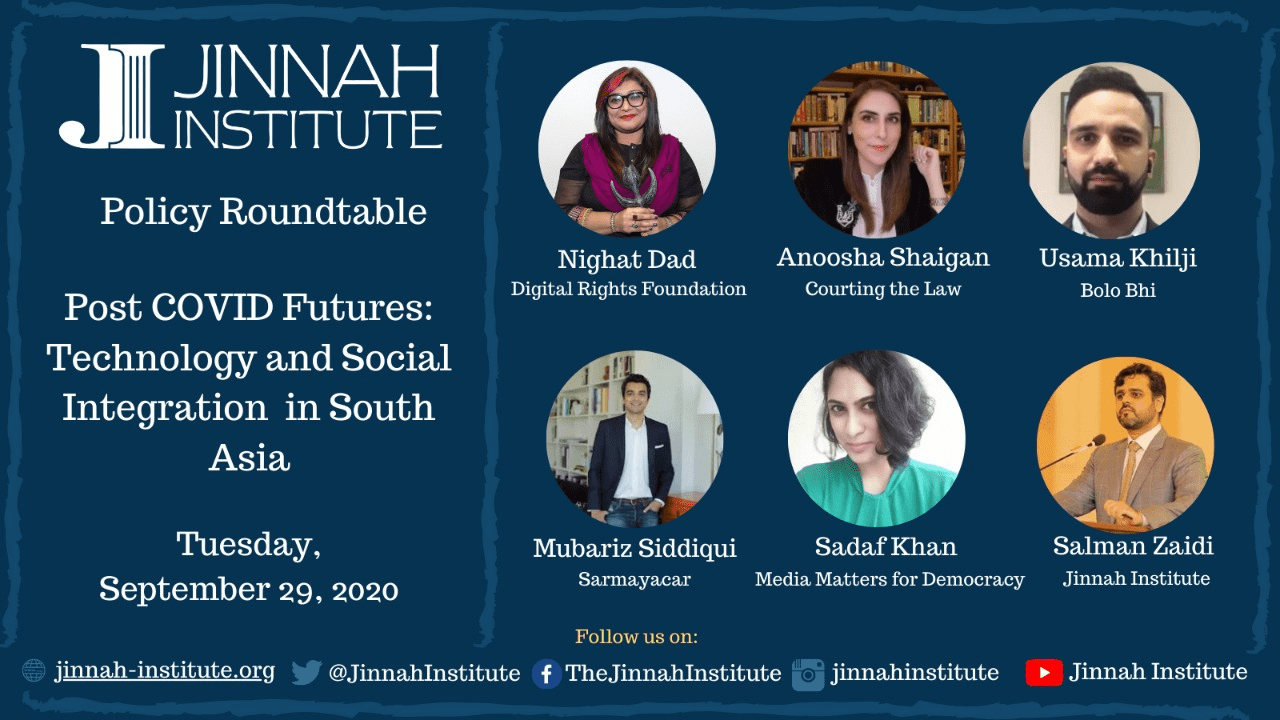 DRF participated in the Jinnah Institute Policy Roundtable on Post COVID Futures: Technology and Social Integration in South Asia. DRF’s Nighat Dad focused on how technology has enabled positive governance and participation in politics and also highlighted the integration of technology in South Asia. 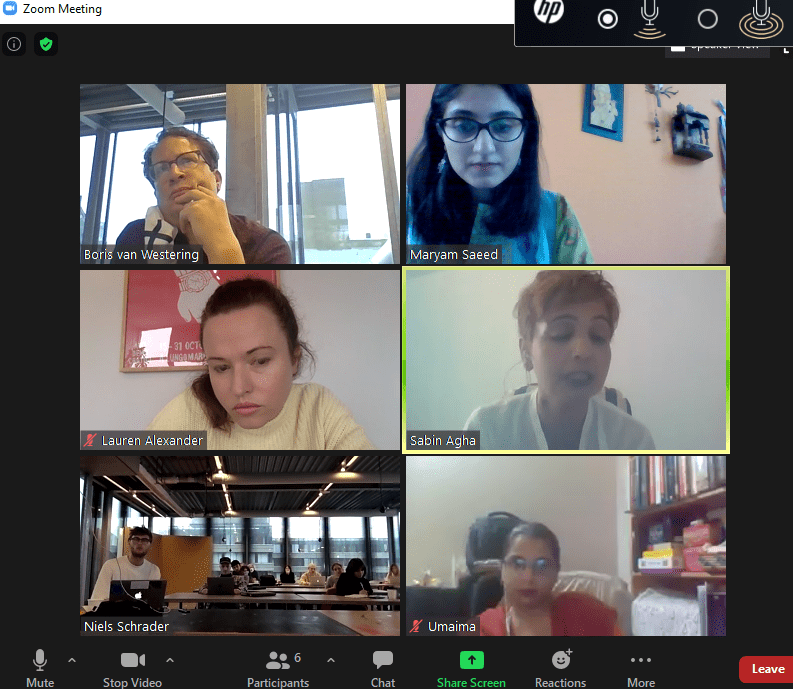 DRF is collaborating with Free Press Unlimited on a project  - Facts Not Filters - in which international students of Royal Dutch Arts Academy will be exploring the different geographical contexts, including Pakistan, in which journalists work. DRF’s Program Manager, Maryam Saeed, and two journalists from the Network of Women Journalists for Digital Rights, Sabin Agha and Umaima Ahmed, explained the context of Pakistan and the challenges that women journalists face because of their profession and gender. 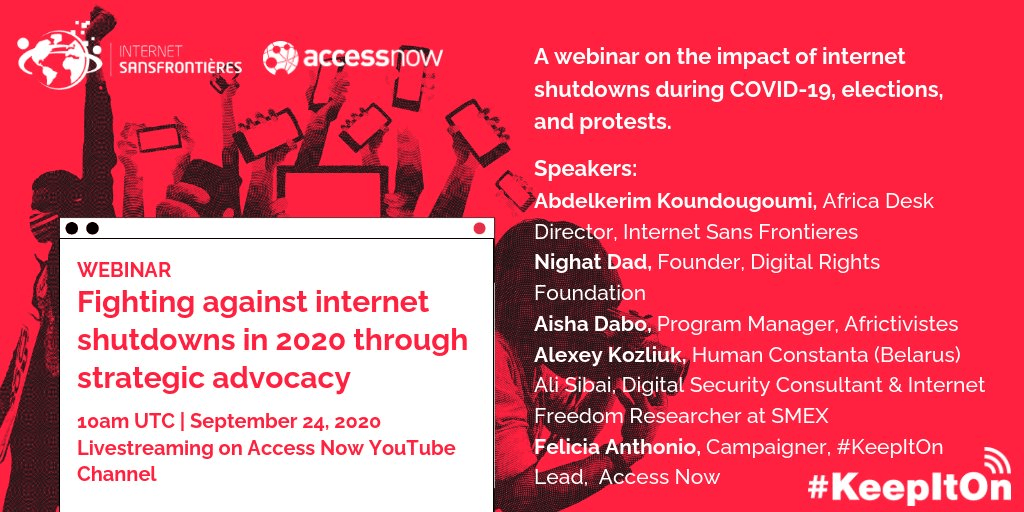 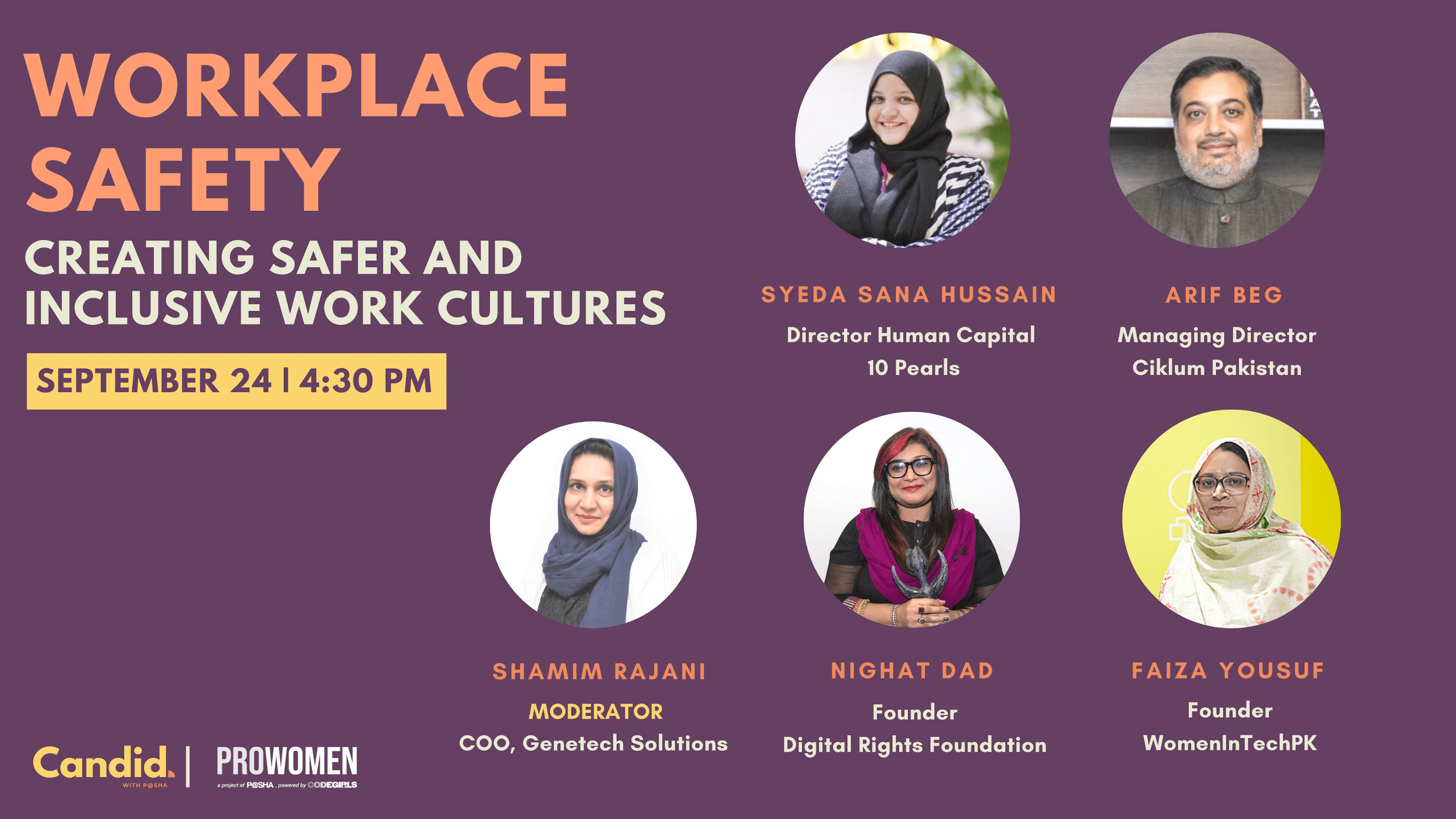 DRF participated in the Workplace Safety Creating Safer and Inclusive Work Cultures. Nighat Dad shed light on the workplace harassment act and highlighted that implementation of the law is important along with the importance of reform within the legislation.

Digital Detox and Self Care 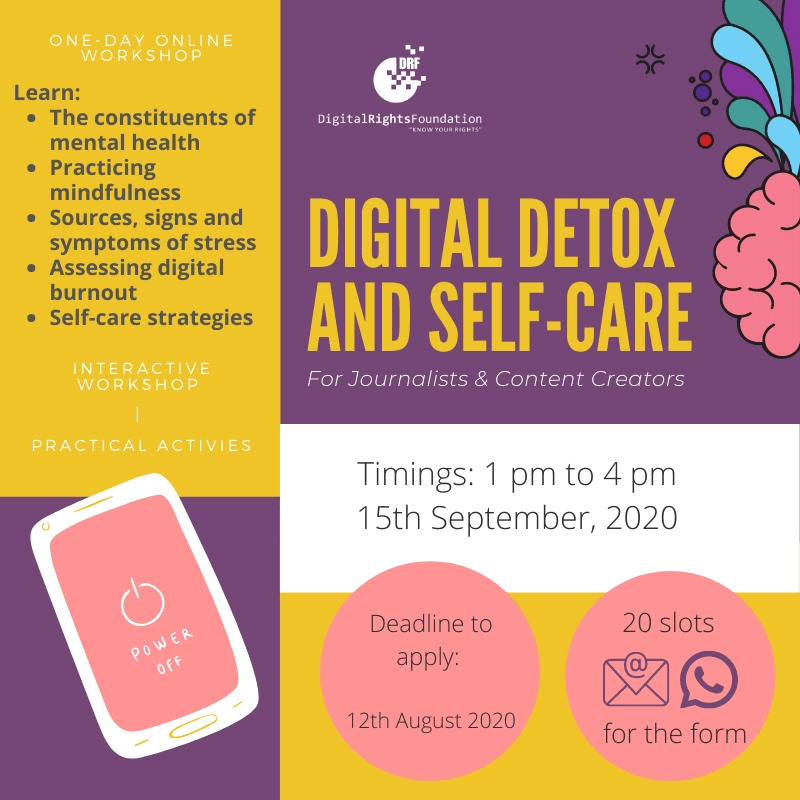 An online training was conducted by Saba Sabir from DRF with female digital journalists from our Network of Women Journalists for Digital Rights on digital detox and self-care. The training focused on identifying digital burnout and implementing strategies for well-being in the digital space. Through the training, DRF intended to empower journalists to create more mindful, meaningful, well-rounded lives both online and off while not letting their profession be affected.

This panel discussion was arranged by the LUMS Law Alumni Association in collaboration with the LUMS Law Journal. Our team member moderated the group discussion. Video is available on: https://www.youtube.com/watch?v=t8AGwN5s9eA 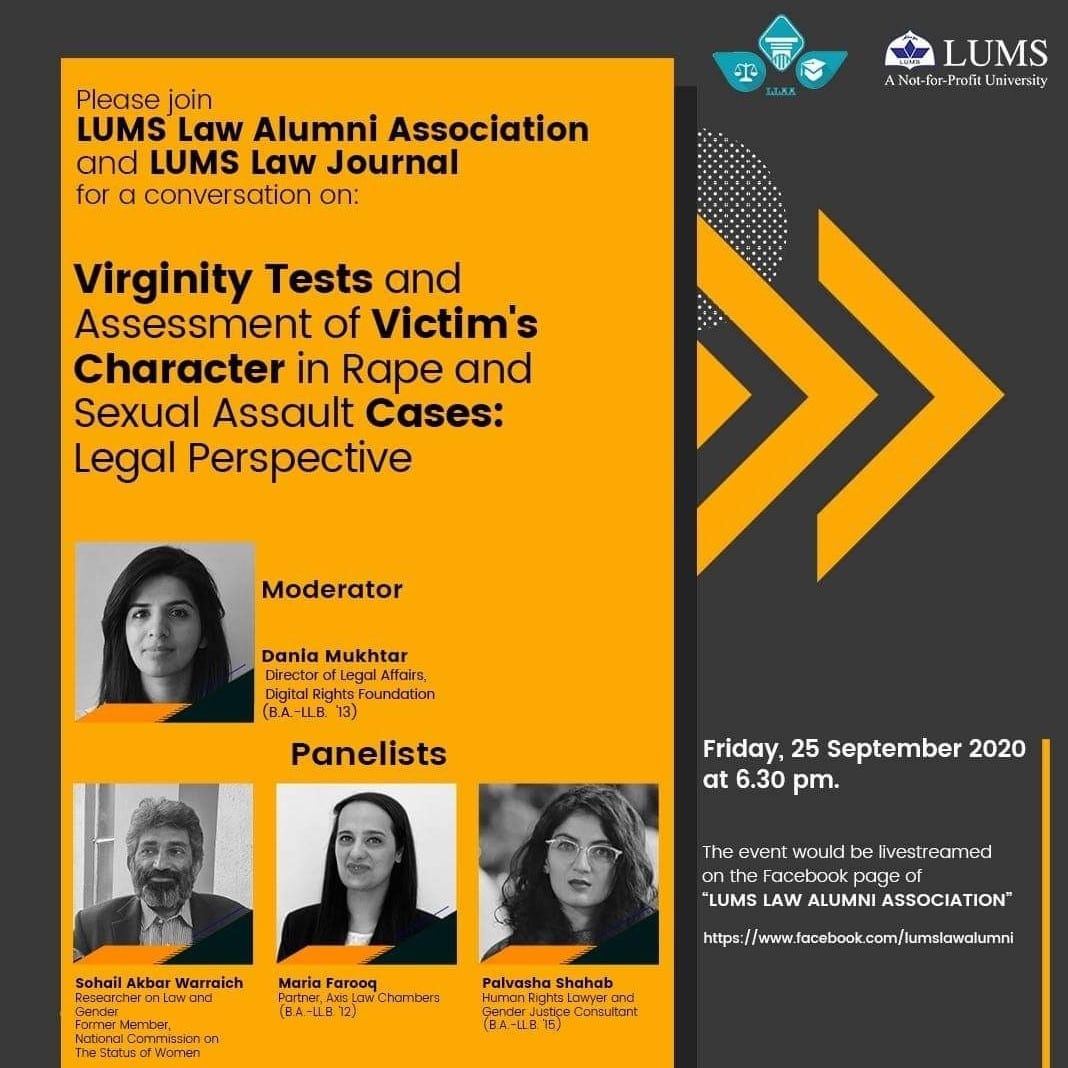 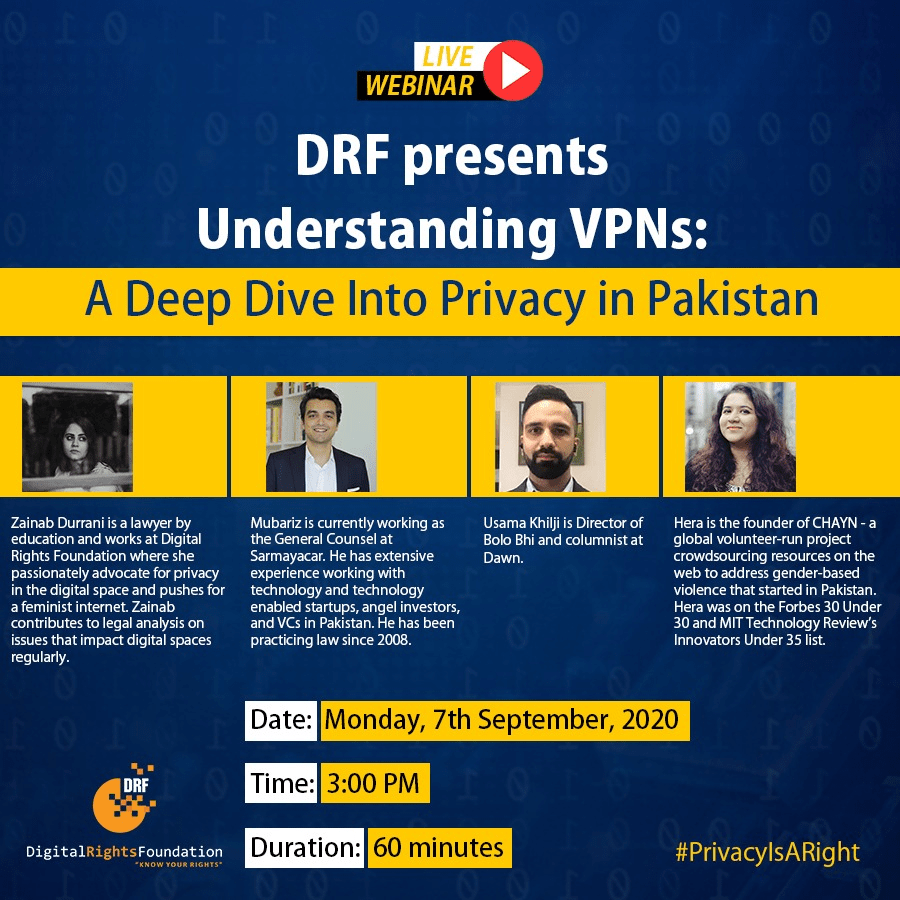 DRF conducted a session on Understanding VPNs on the 7th of September, 2020 with three esteemed panelists. We had Usama Khilji of Bolo Bhi, Hera Hussain, CEO of CHAYN Organization and Mubariz Siddiqi, General Counsel for Sarmayacar with Zainab Durrani (Project Manager, DRF) moderating the panel.

The discussion revolved around the workings of VPN, myths and lies associated with it, usage and its types, the call for registration of VPNs by PTA and the impact of regulating VPNs, from a human rights and business perspective.

Tackling Misinformation during times of COVID19

DRF conducted two sessions on Tackling Misinformation during times of COVID19 on the 23rd and 25th of September. The session was conducted with journalists and other relevant stakeholders where a much needed conversation took place around how misinformation has increased during the pandemic. The session was possible with the help and support of Friedrich Naumann Foundation (FNF).

DRF conducted a series of sessions under the Hamara Internet program on Online Safety of Young Adults in Pakistan.The sessions took place with young adults in which different themes on online safety and violence were highlighted. The sessions were conducted by DRF’s youth ambassadors who discussed different themes like online harassment, data protection, privacy, cyber bullying, online safety and fake news in detail. The youth ambassadors were divided into two groups and a total of 8 sessions took place for the participants who were from across Pakistan. The sessions were possible with the help and support of Friedrich Naumann Foundation (FNF).

DRF conducted the three day residency training on Online Safety with team ASR focusing on how the organization should keep their data safe and how they should protect themselves online. 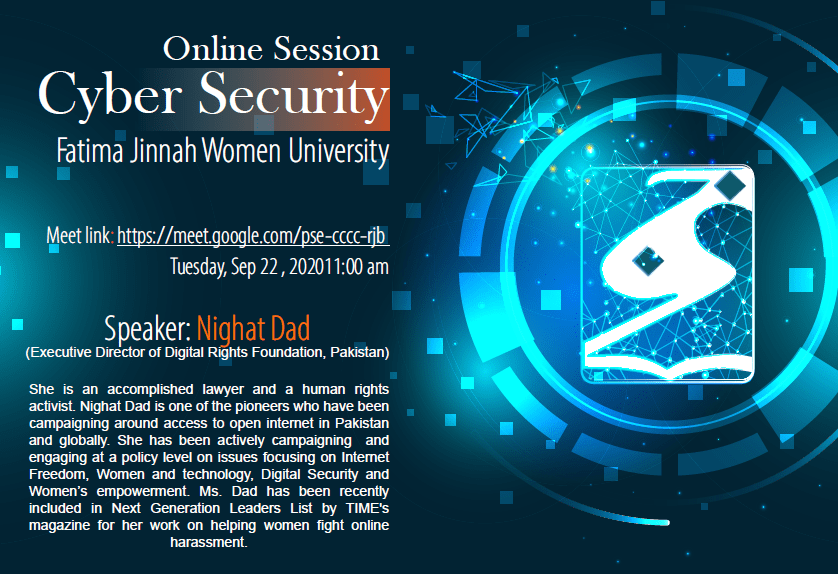 On September 23, Jannat Fazal program manager cyber harassment helpline moderated a session on why i didn't report at Lincoln's corner sindh. The session focused on the reasons that prevent assault victims from coming forward with their complaints. It also focused on the systemic oppression  of the authorities that dissuades victims. 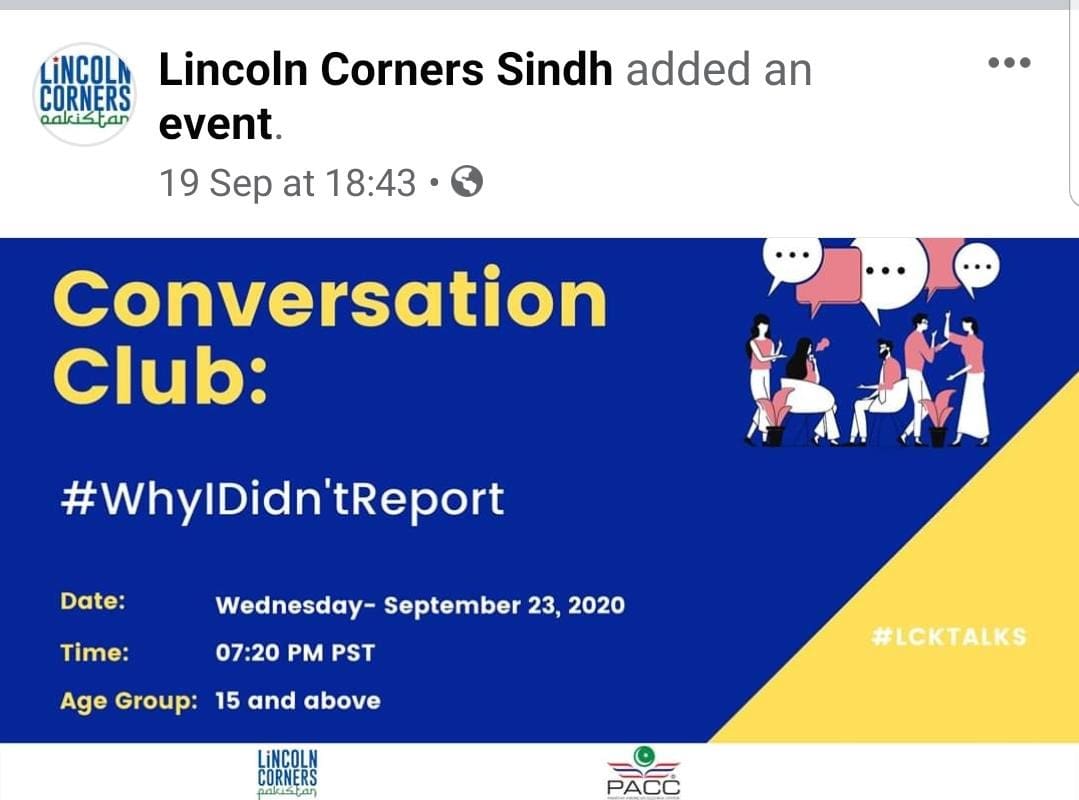 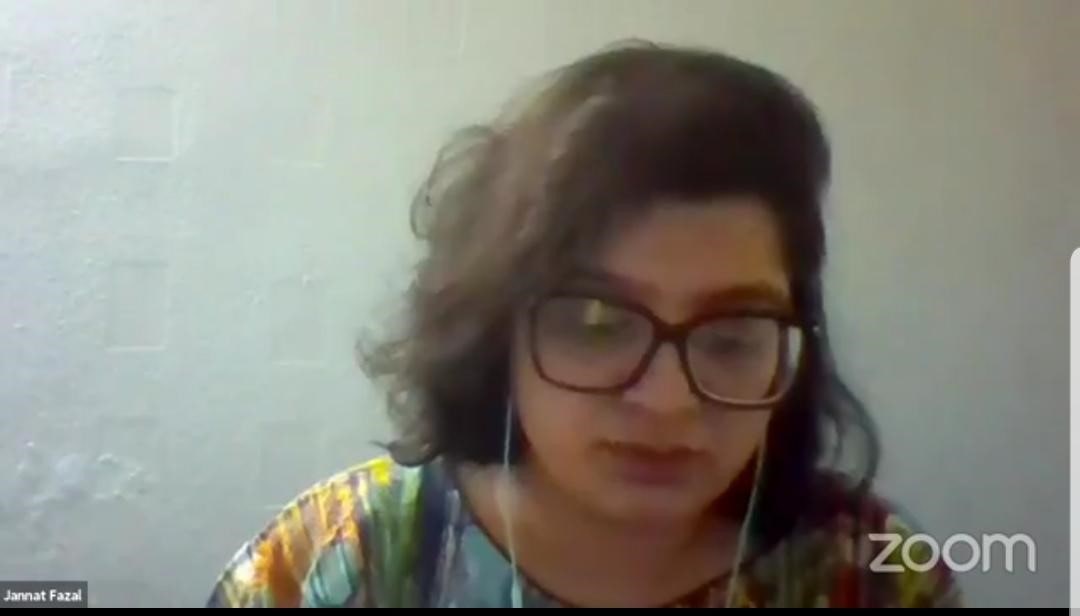 Contact the helpline on 080039393 or email us on helpdesk@digitalrightsfoundation.pk between 9 am to 5 pm (monday - friday). You can also reach out to us on our social media channels.

In times of COVID19 domestic abuse is at an all time high where victims do not have anywhere to go. Ab Aur Nahin is a confidential legal and counselor support service specifically designed for victims of harassment and abuse.