October 3, 2018 - Comments Off on September 2018- Digital Rights Foundation at the UN General Assembly 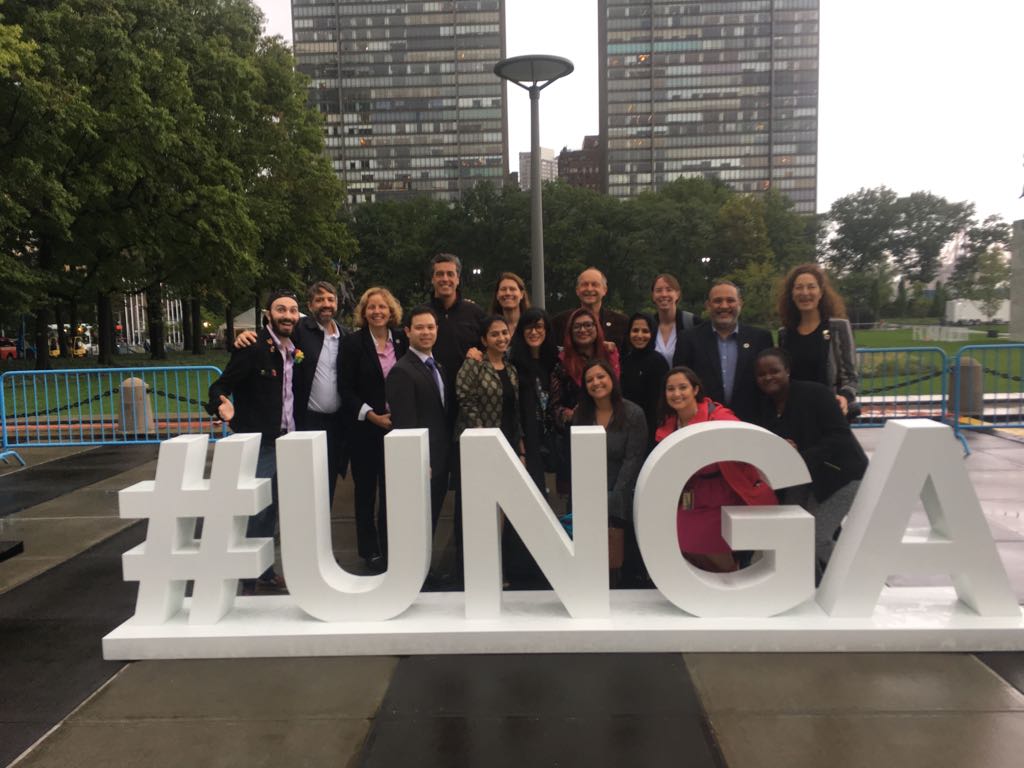 The Summit, which was held during UN General Assembly meeting at the UN's SDG Media Zone on the 25th of September, provided Ms. Dad with the opportunity to highlight the need for protection of individuals, particularly women, against cyberbullying, discrimination, and intimidation. She also went on to say that "Online human rights must be recognized and upheld like offline human rights”. For the full speech, click here. 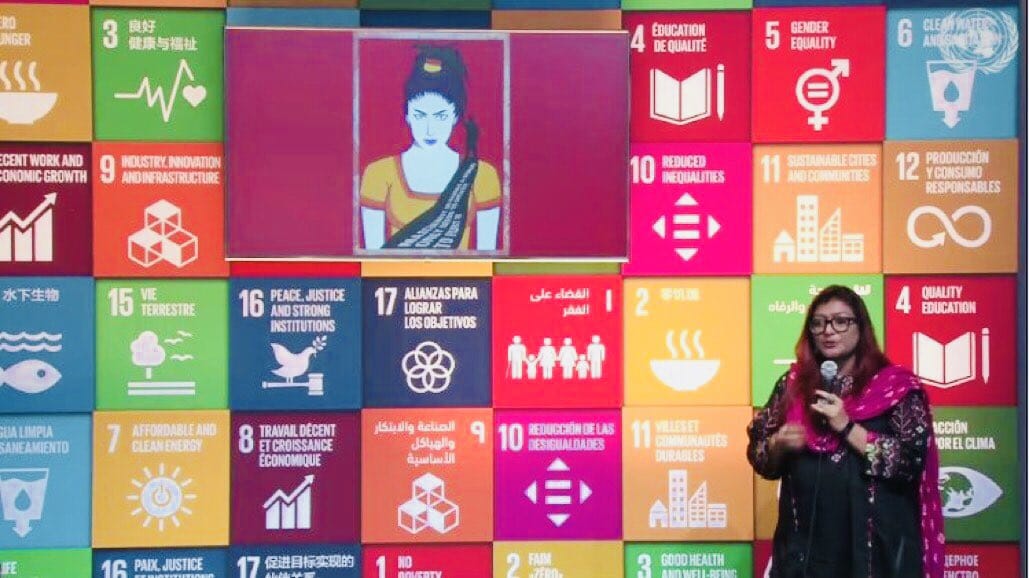 The article featured in Forbes had the following to say about the Summit:
'Last week, while countless world leaders made empty speeches to the UN General Assembly, a group of real change makers were nearby pitching their innovative technologies and programs, and challenging the world to scale actual solutions to our greatest challenges.'
Click here for the full article.

DRF attended Privacy International’s Workshop on Gender and Privacy in London on the 13th and 14th of September.  This meeting connected partners from the Privacy International Network as well as external experts from around the world. Nighat Dad, Executive Director DRF, served on a panel titled ‘Staying safe in the era of techno-patriarchy 2.0.’, with Sana Farrukh, Research Associate DRF, assisting from a litigator’s standpoint. Other sessions included ‘Rethinking consent in the digital age’ and ‘Testimonies of abuse: documenting the targeting of communities at risk.’ 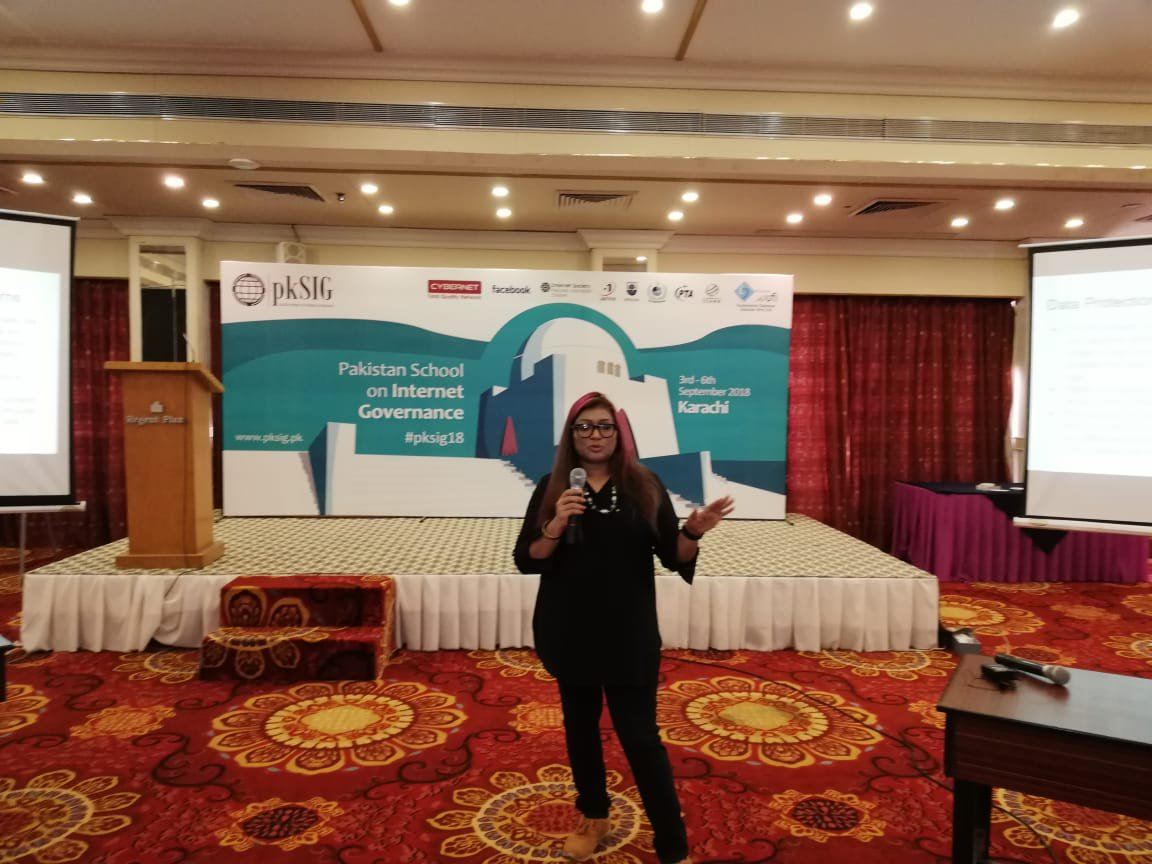 Nighat Dad has been associated as a faculty member with Pakistan School of Internet Governance since its inauguration in 2015. On September 5th 2018, Ms. Dad spoke to the Karachi class 2018 about internet law and policies and the gendered lens of the internet at the event. 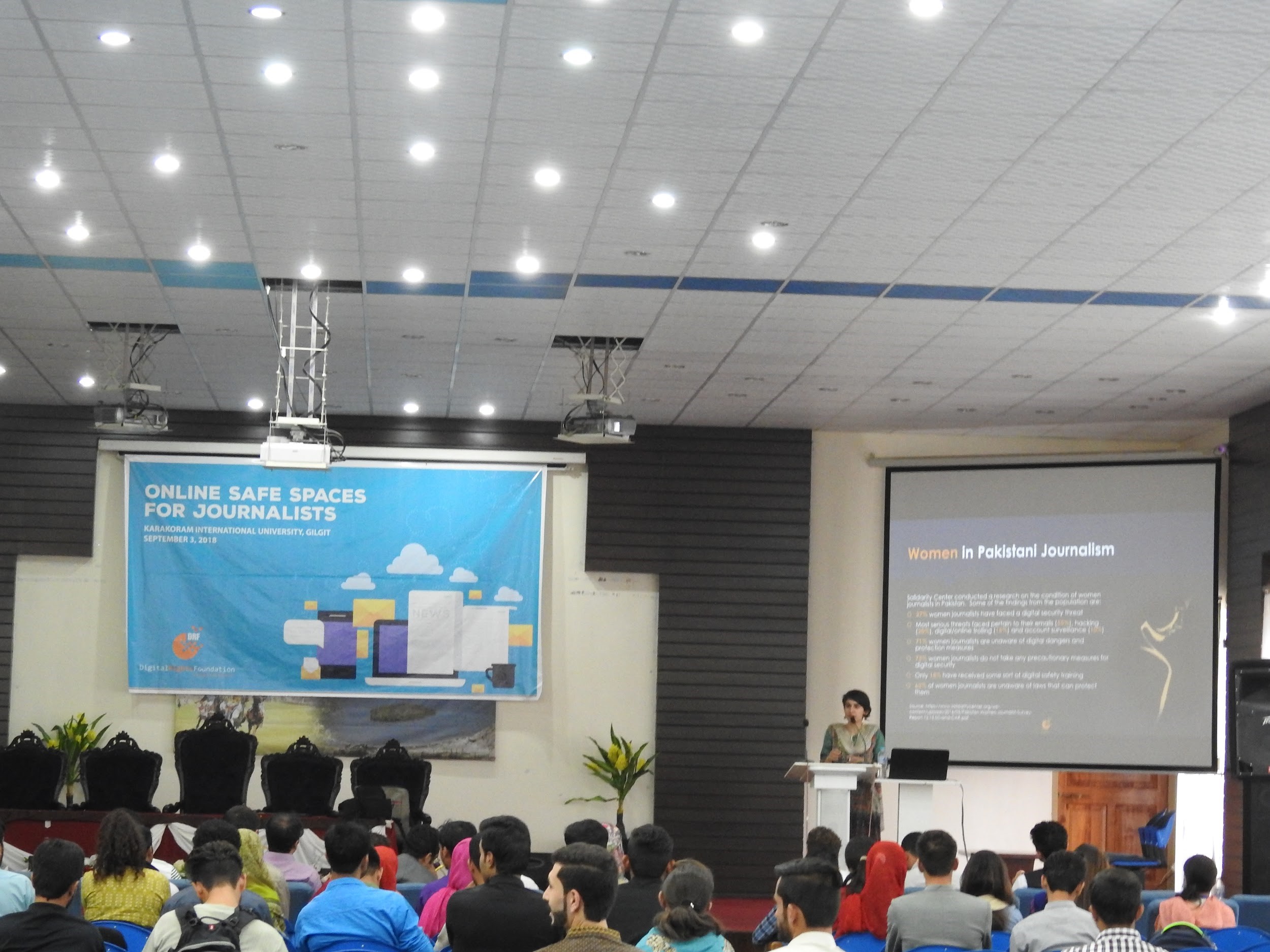 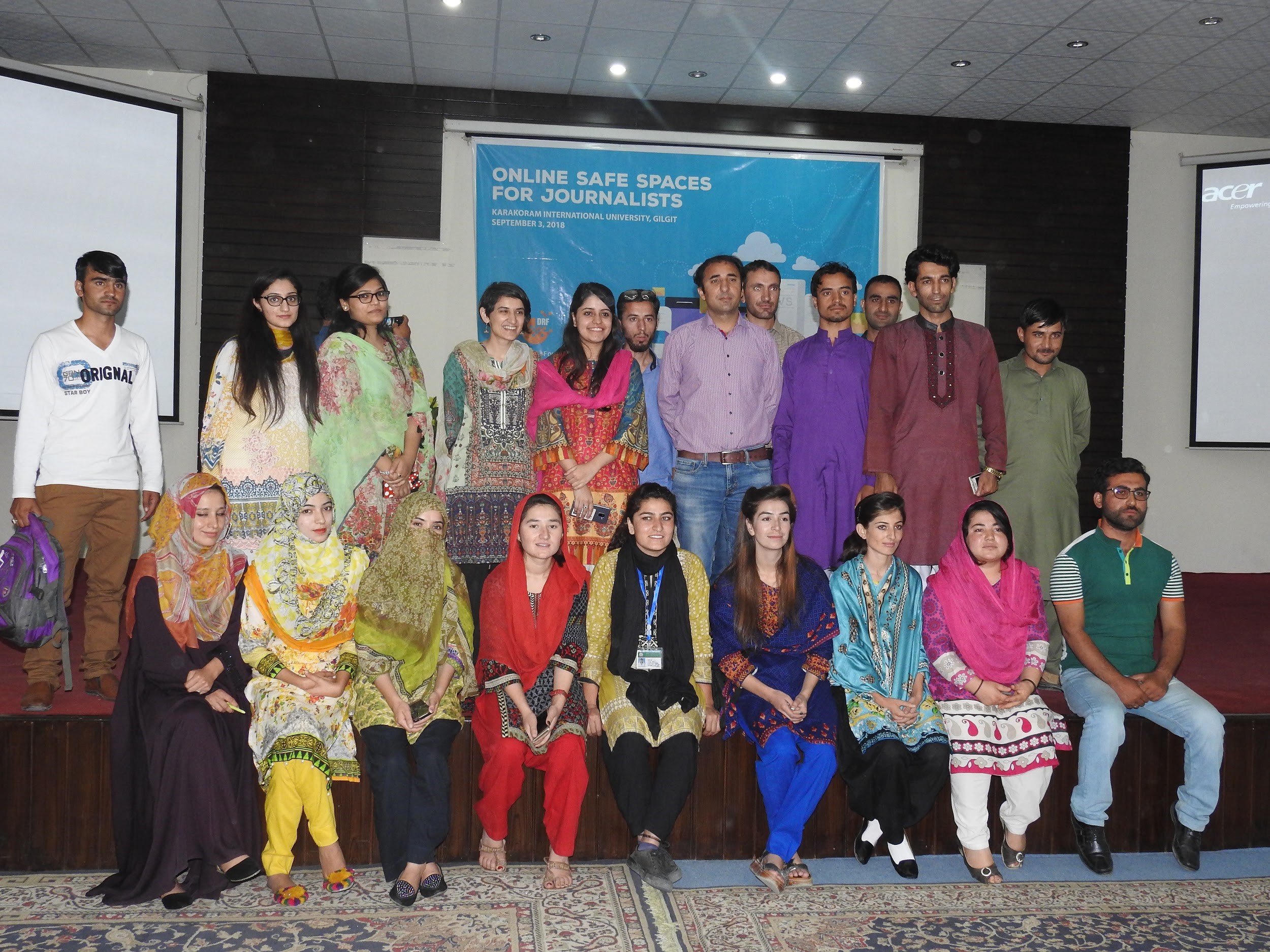 DRF held a session at Karakoram International University with the students of Media and Communication department on September 3rd 2018. Around 97 students attended the awareness raising session where they were encouraged to keep themselves secure online. In the second half of the session they were given digital security training and were also provided with CDs, which included security toolkits and a guidebook on digital security.

Workshop for Lawyers on Digital Rights in Gilgit 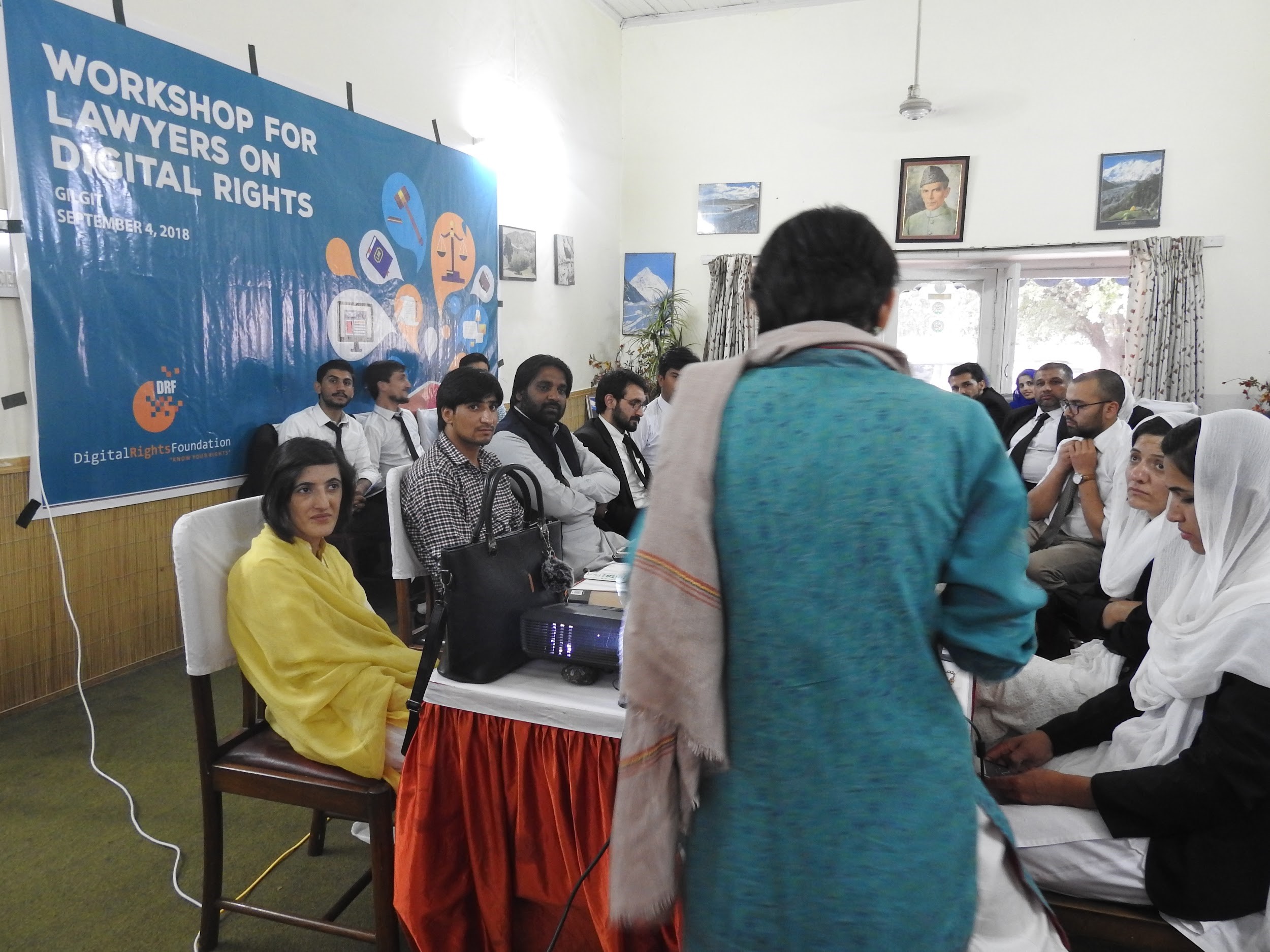 On September 4th 2018, DRF conducted a workshop which was held for Lawyers in Gilgit, focusing on creating awareness regarding digital rights and the legal landscape that governs digital platforms. Around 25 lawyers participated in the session. The participants were also given specifically designed toolkits, to guide them on how they can make online spaces safe for themselves by adopting various tools and resources available to them.

Workshop on investigative reporting, ethical journalism and digital rights for journalists in Gilgit 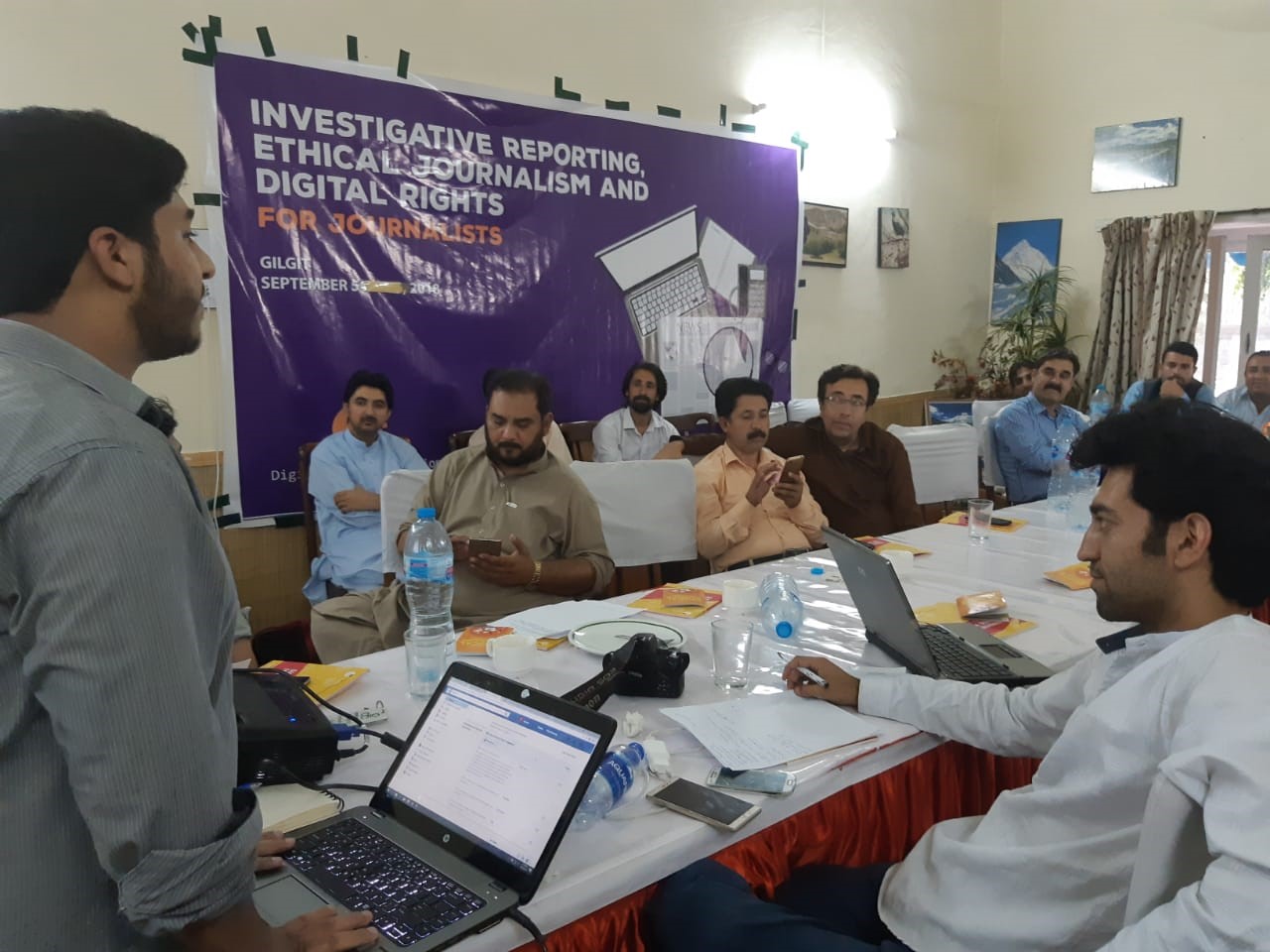 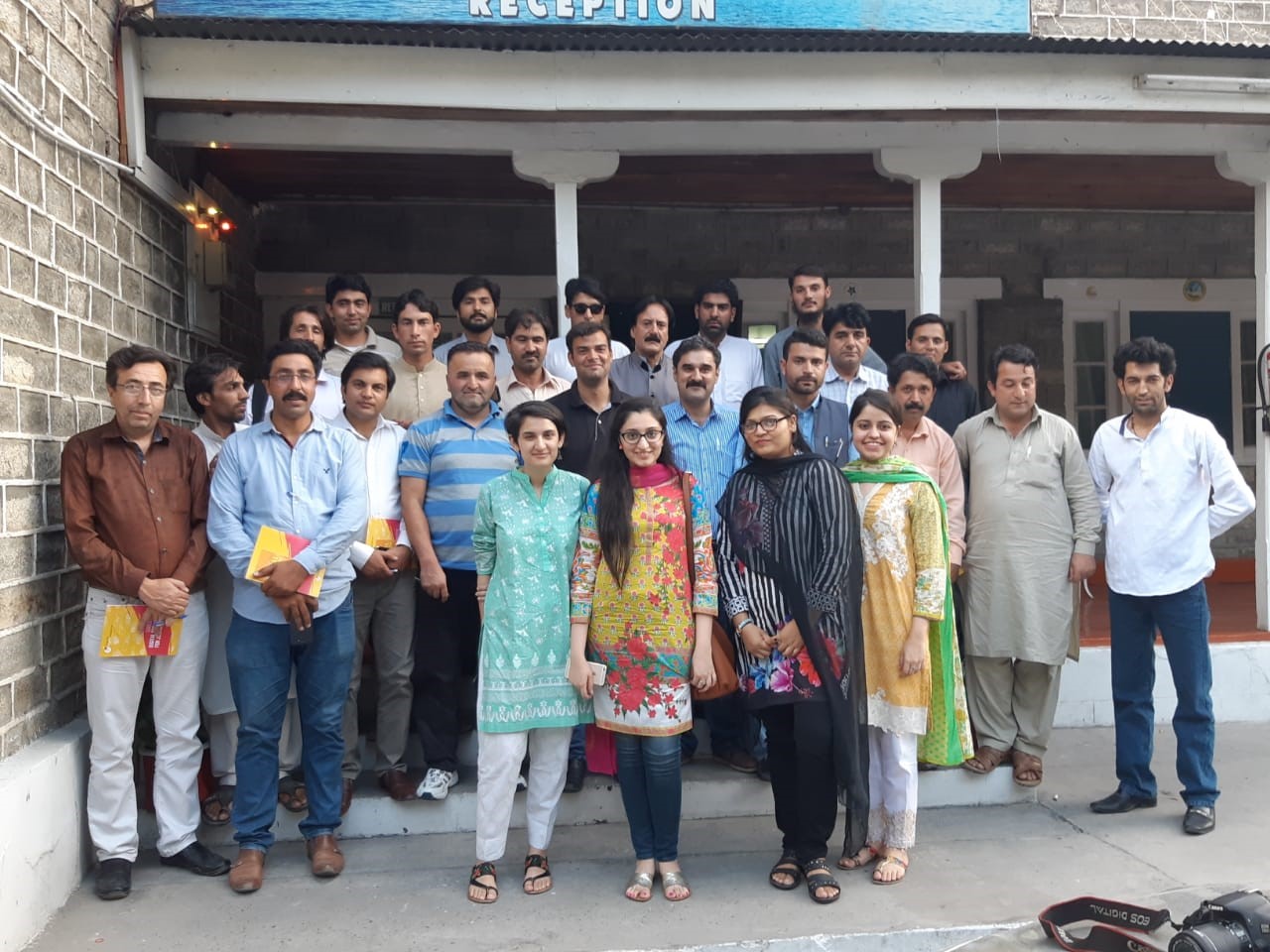 On September 5th 2018, DRF conducted a workshop for journalists from across the Gilgit Baltistan area. This workshop held a discussion on whether the existing media ethics are suitable for the evolving digital media landscape or new and different standards are needed. The sessions also focused on actions needed to tackle the spread of fake news and disinformation online, particularly as digital misinformation is extremely potent in Pakistan, owing to a large segment of the population lacking digital literacy. Another session was aimed at creating awareness about the legal landscape that governs digital platforms for freedom of media and journalists. The participants were also given hands-on training and specifically designed toolkits to guide them on how they can make online spaces safe for themselves by adopting various tools and resources available to them. 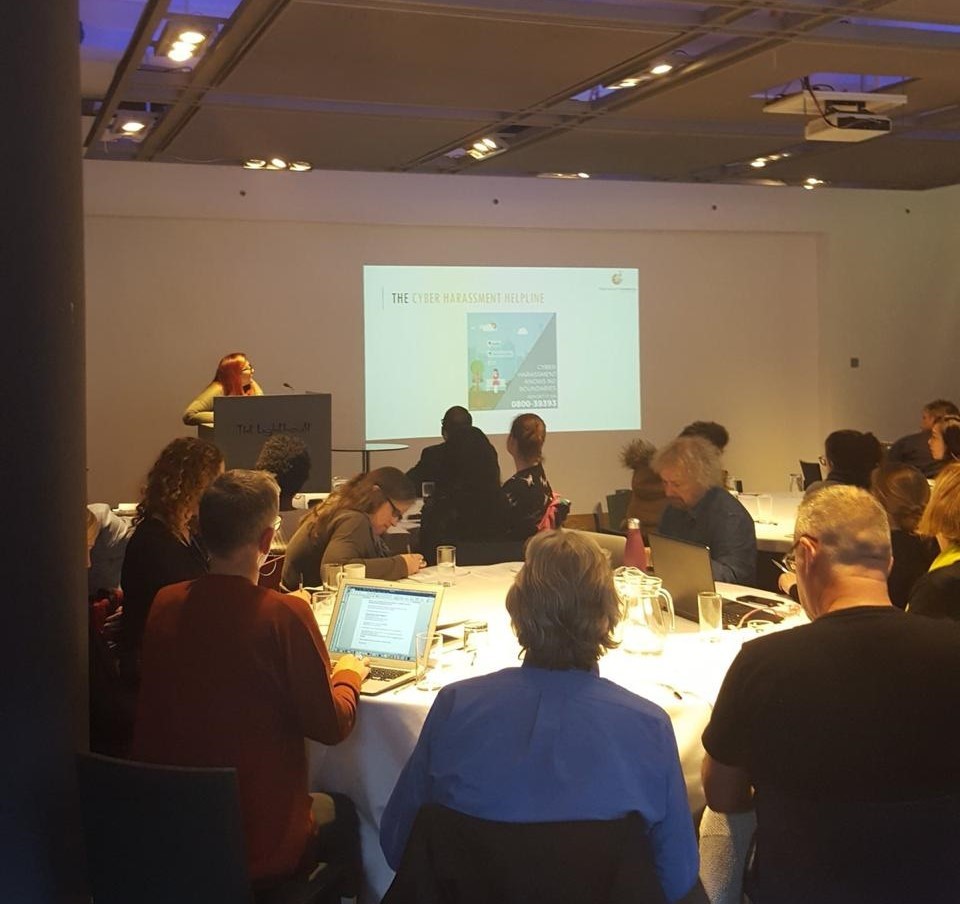 Nighat Dad spoke at an event titled ‘Connecting or Excluding? New Technologies and Connected Communities’. She explored how digital technologies can enable new forms of co-creation and co-research with communities and can help in building new communities of learning, shared knowledge and creativity. It was a two-day event that took place on 26th and 27th September 2018, which included a range of activities including talks, presentations, workshops, performances, networking and exhibition elements. 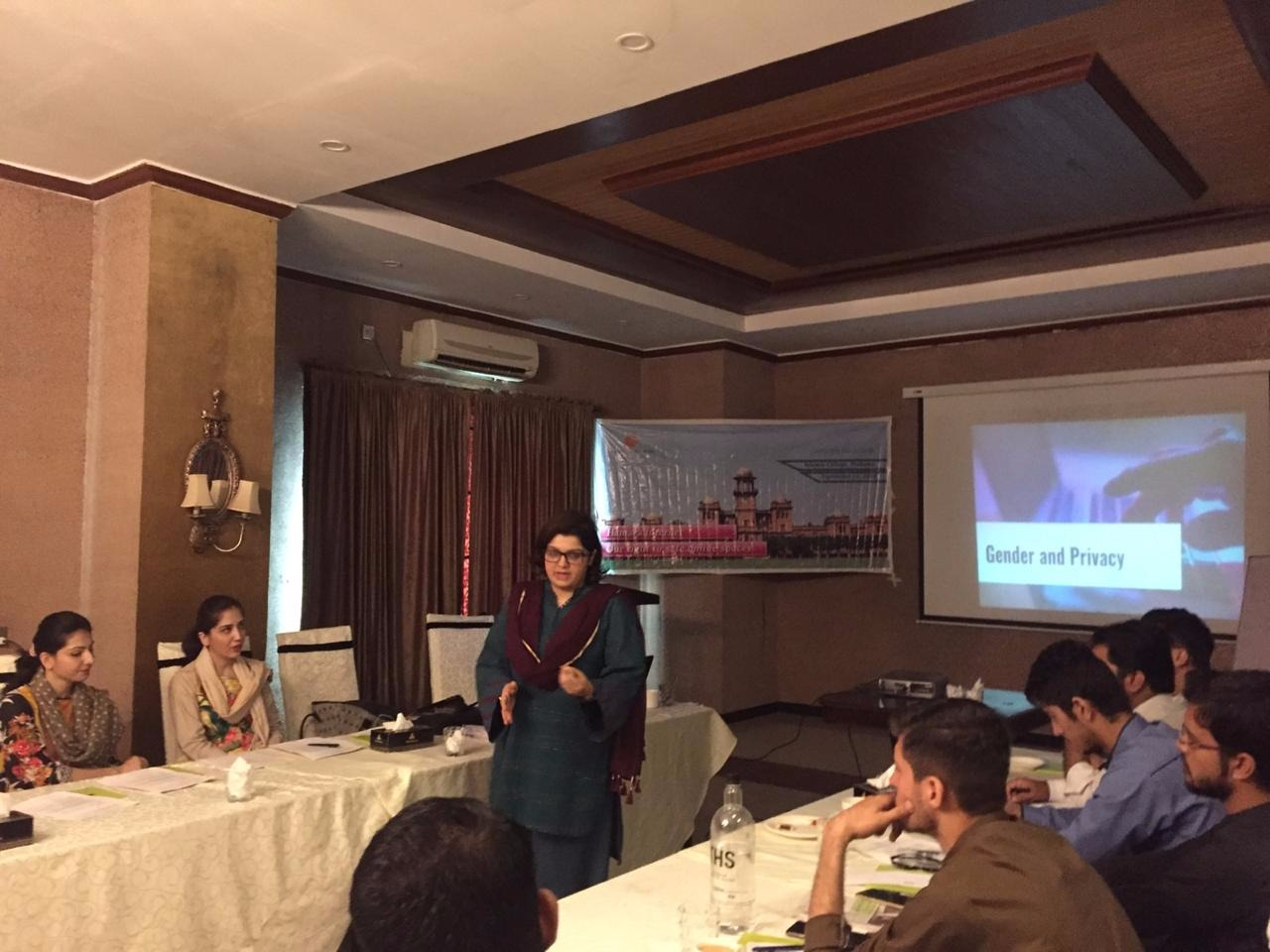 DRF with the help of our partners Friedrich-Naumann-Stiftung für die Freiheit (FNF), conducted the session Hamara Internet ‘Our Right to Safe Online Spaces’ focusing on data protection and privacy in Peshawar. The session was attended by students and professors of Islamia University and a much needed debate around privacy laws in Pakistan and gendered privacy took place. 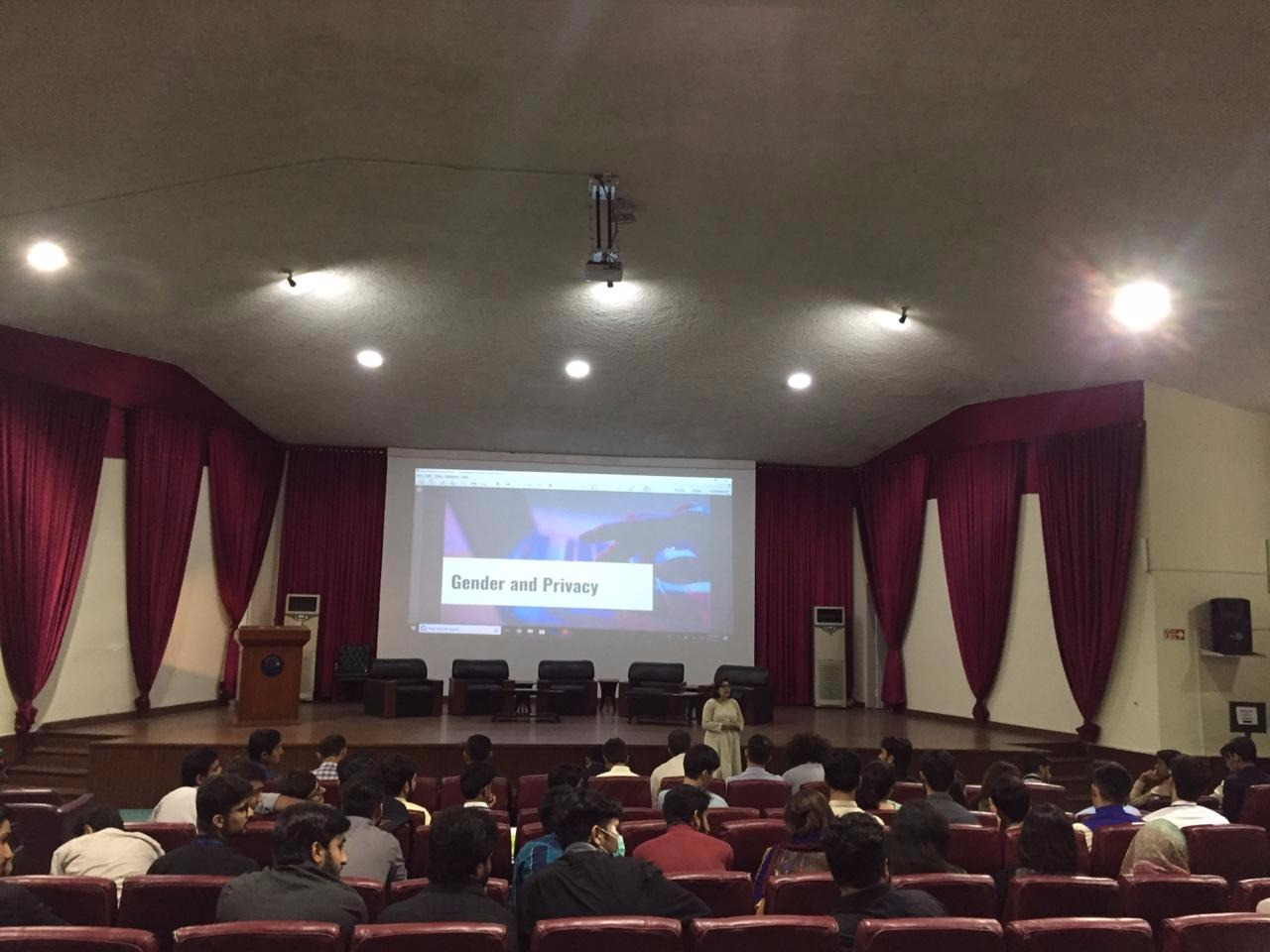 Panel discussion at “Conference on Violence Against Women” 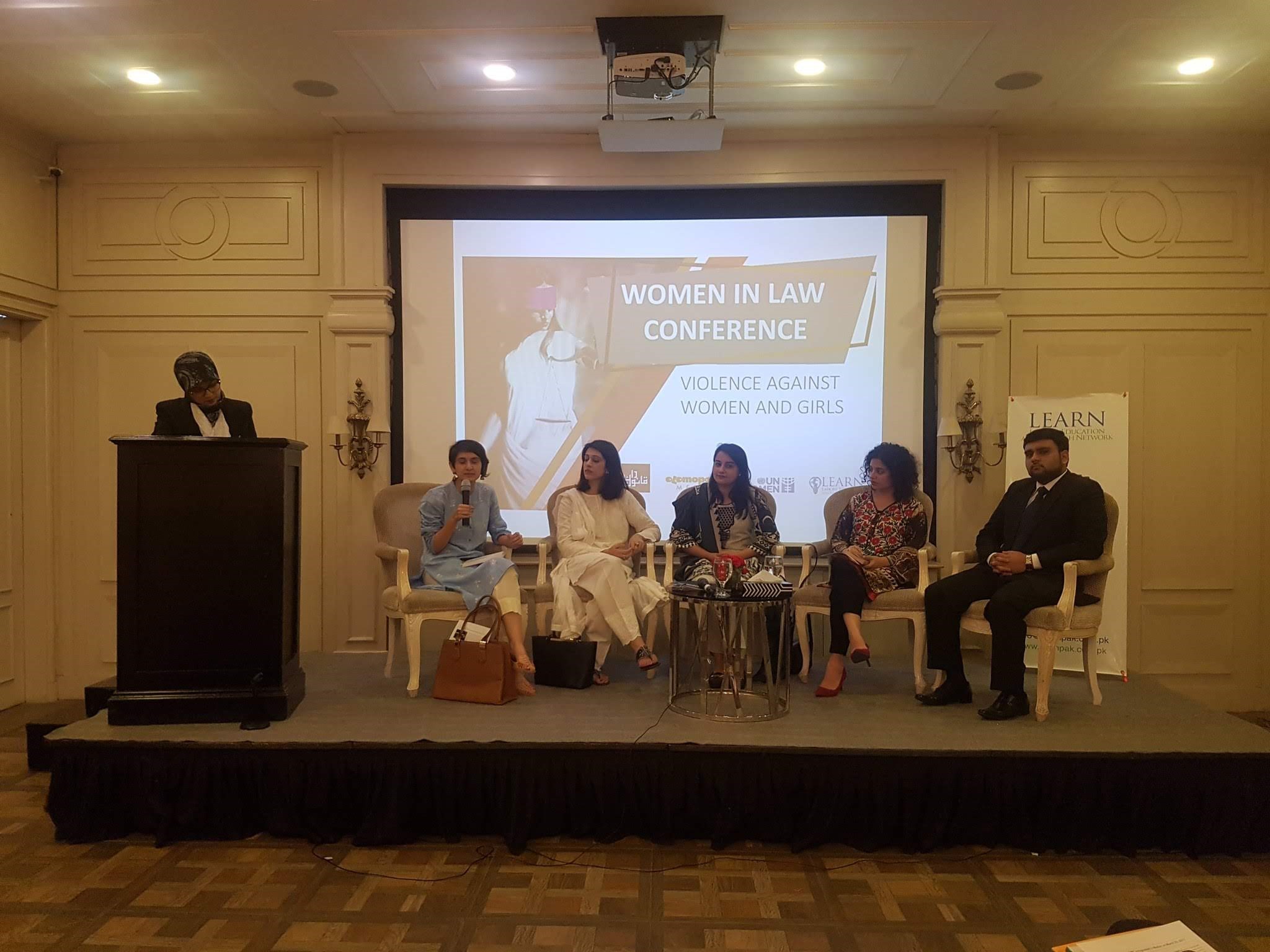 DRF participated in a panel discussion titled “Existing Protection Mechanisms – Role of Private and State-Run Institutes + Role of Technological Advancement in Supplementing Access to Justice” at the Conference on Violence Against Women organised by LEARN on September 15. The panel was moderated by Angbeen Mirza and attended by representatives from PSCW, Courting the Law, Dastak and the SMU initiative. 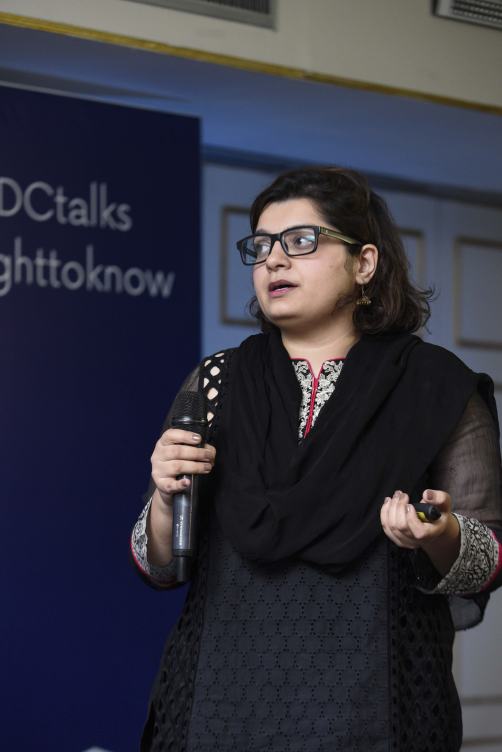 Jannat Fazal from DRF attended UNESCO Islamabad’s International Day for Universal Access to Information celebration as a guest speaker on 27th September, 2018. The program included IPDC talks where speakers from civil society, government and media delivered talks, followed by panel discussions. She highlighted the role of duty- bearers in promoting the right of access to information. She focused on Open Government Partnership (OGP) and the windows of opportunity to improve effectiveness of access to information initiatives. 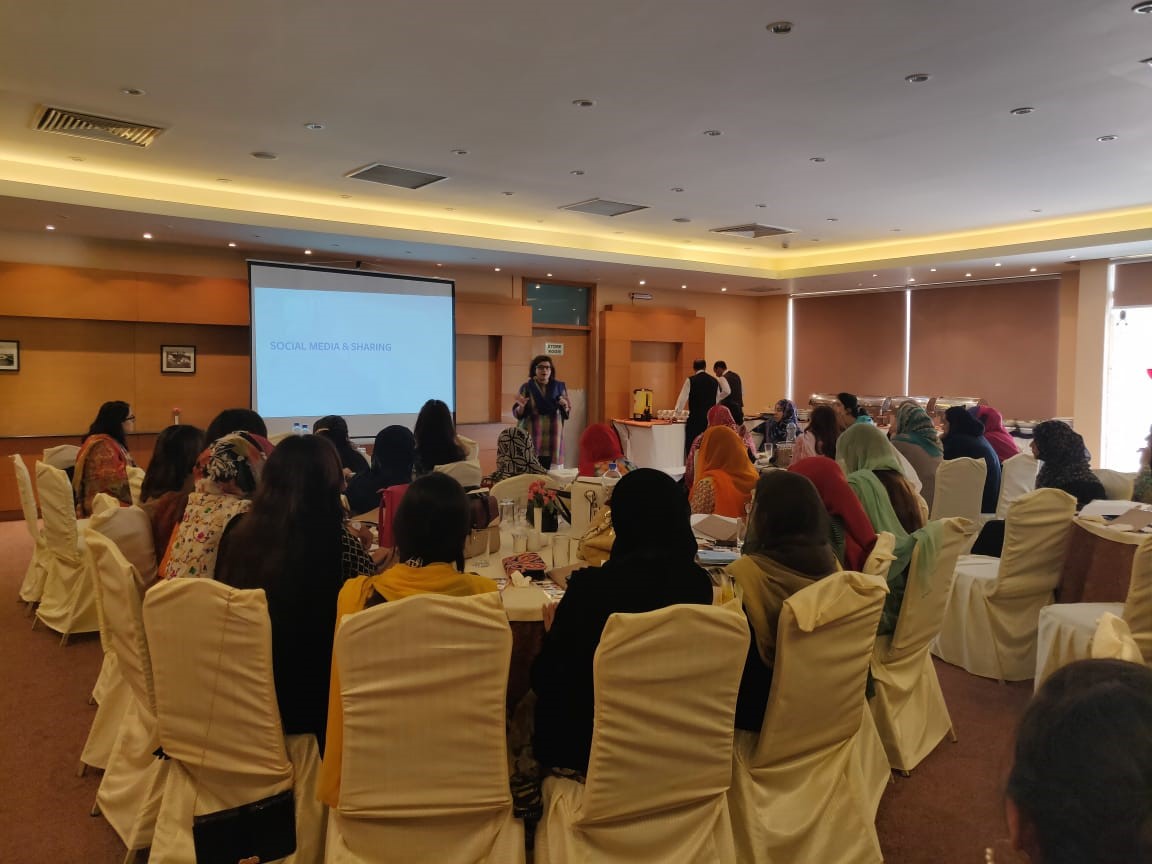 DRF’s team conducted a train-the-trainer training in collaboration with Facebook on the 13th of September, 2018 where Facebook’s safety modules were discussed with and communicated to  50 Computer Science teachers from federal schools and colleges in order to enable them to deliver online safety and security sessions to their students.

DRF at #EmpoderaxlosODS in Malaga, Spain 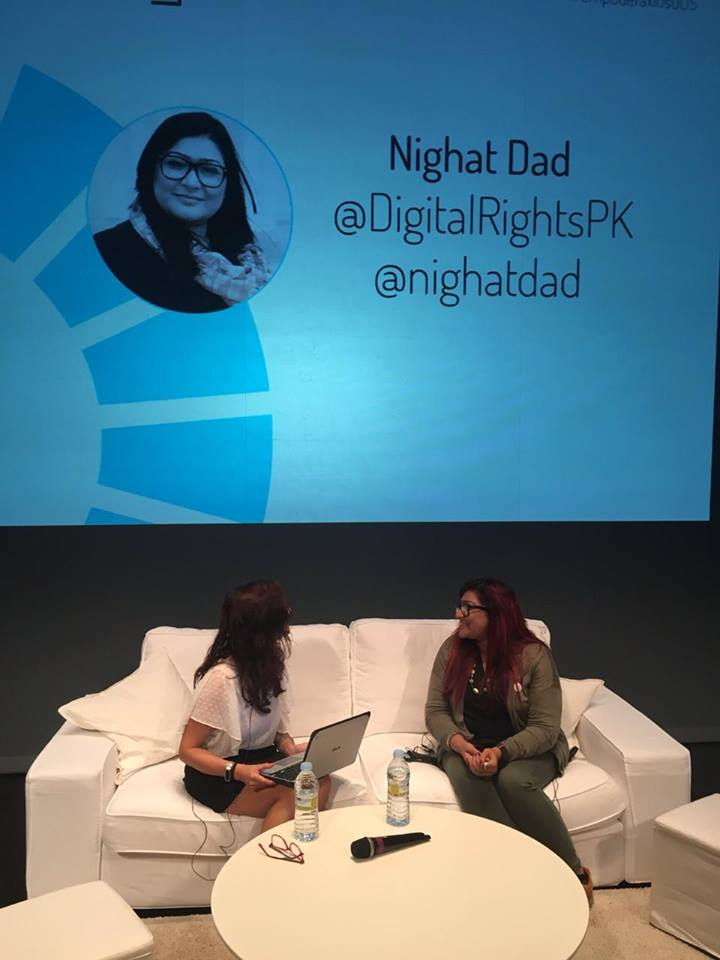 On September 28th 2018, Nighat Dad spoke at the #EmpoderaxlosODS In Malaga, Spain about women reclaiming online spaces and how they can use the internet to express and empower themselves. The talk focused on DRF’s journey from the beginning and how women are more vulnerable over the internet and how they need to take extra precautions to protect themselves. Ms. Dad talked about the Cyber Harassment Helpline and three main services it provides with legal aid, psychological help and digital security assistance.

The DRFs Helpline team assisted the progress of a case that fell under the Workplace Harassment Act, which was filed by a woman facing serious harassment and intimidation at the hands of a colleague in her hometown of Chakwal. The case was filed with the Provincial Ombudsperson’s Office in Lahore under s. 2 (h) of the Protection Against Harassment of Women at the Workplace Act, 2010 and the decision was read out on the 4th of September, 2018 which held that the accused was guilty of causing harassment to the complainant under the relevant section of the Act and was awarded the penalty of compulsory retirement under s. 4(4)(ii)(b) 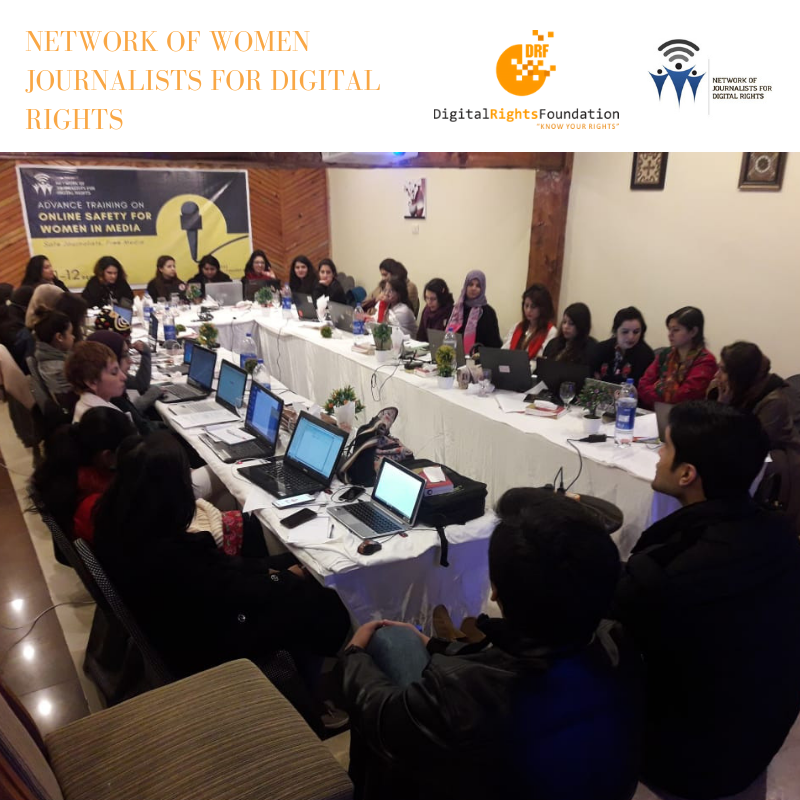