In a bid to fight hate speech and encourage civil society to step up and curb its spread, the National Counter Terrorism Authority (NACTA) has created an app by the name of Chaukas.

Hate speech, as per Express Tribune, is defined as any spoken or physical action that negatively targets a person or group of people based on their ethnicity, gender or religion, and has been legislated upon under the Anti Terrorism Act 1997 (ATA) and the Prevention of Electronic Crimes Act 2016 (PECA), where the ATA defines ‘terrorism’ as use or threat of an action that, inter alia,

‘incites hatred and contempt on religious, sectarian or ethnic basis to strip up violence or cause internal disturbance;’

as well as making the printing, publishing and disseminating of any material to incite hatred.

PECA, through s.11 criminalizes hate speech by stating the following:

‘Whoever prepares or disseminates information, through any information system or device that advances or is likely to advance interfaith, sectarian or racial hatred shall be punished with imprisonment for a term which may extend to seven years or with fine or with both.’

The app, launched by the Interior Minister Ahsan Iqbal in early March 2018, is the latest initiative taken under NACTA’s Tat’heer Drive, which is its cyber counter terrorism initiative and is available at the Google and Apple App Stores, free of cost. In order to fully assess the efficacy of the app, it was downloaded and taken for a test drive.

Once installed, the user is asked to register themselves by using either their email address or phone number. This is potentially troublesome with regards to the concept of anonymity and may serve as a deterrent for those members of society who do not wish to expose themselves. However a counter-argument could be that the potential for misuse is greatly heightened when the requirement to declare oneself before registering a possibly mischievous complaint is not present.

Once registered, you will come across the home page which lists the four options you have with which to report any untoward discourse, namely audio recording, photographic evidence submitted via camera, URL and text. 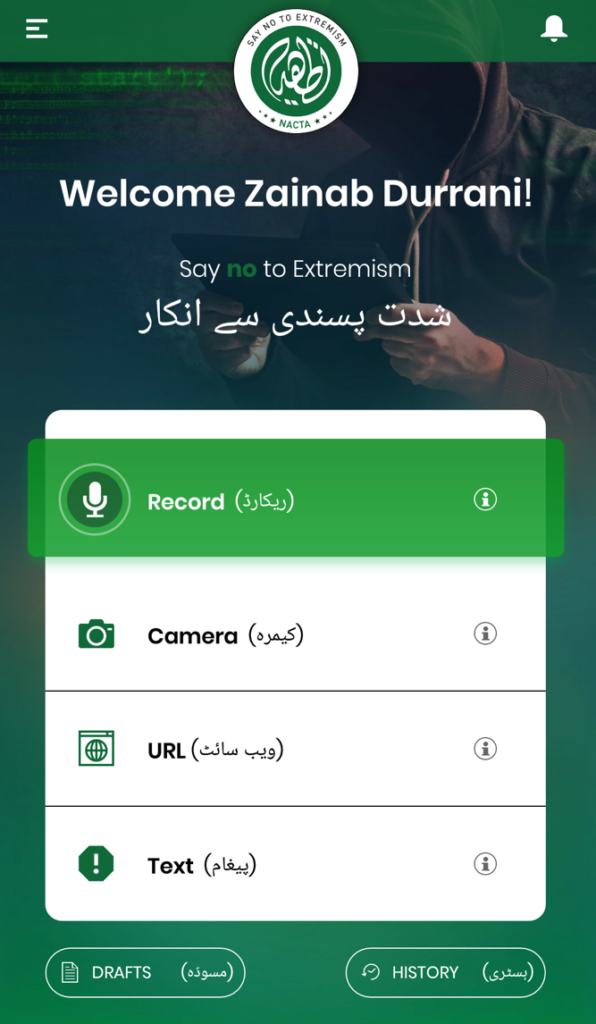 Whilst the app does provide a substantial range of avenues to record the user's complaint, what is woefully missing are any guidelines or definition as to what constitutes a hate crime, or any examples to demonstrate it, in order to ensure that only relevant data is sent NACTA’s way instead of hordes of ineligible complaints being churned out and gumming up the works. This would impact not only the efficiency on the government's end but also allow for minimisation of loss of time between the report of a bona fide case of hate speech and action taken on it by the authorities, which as per the app include the police, FIA and other law-enforcement and regulatory authorities in Pakistan, as the prologue states.

The DRF’s recommendations to NACTA would be to strengthen the mechanism to ensure anonymity as well as the mechanism to protect user data, once it has been submitted to the app. There is also a noticeable lack of any privacy policy being implemented in terms of the data that is being collected, which should most definitely be made a part of the application after consultation with tech and privacy experts from both the government and civil society organisations.

Another critical and hitherto lacking feature would be to present the user with a definition of what hate speech is, exactly, to ensure that anyone who wishes to lodge a complaint is cognizant of the nature and severity of an allegation under this ambit. Also to be considered is the addition of possible sections of the law that could protect the victims of hate speech and provide them with security under the law, as well as those sections which penalize false allegations should be prominently displayed and easily accessible on the app itself. Lastly, we feel the app should have a PSA promoting peace and tolerance, to ensure that people don’t take the law in their hands.

In summation, the verdict would be that the app, while a commendable effort on the Authority’s part, is not without its pitfalls and it is our recommendation that the feedback that NACTA is receiving through us and other channels should be utilized to fine-tune it to turn this in to a platform that could potentially play a pivotal role in eradicating the growing intolerance and hate speech from the country.