November 2, 2020 - Comments Off on Pakistani students in Wuhan: the other side of the story

Pakistani students in Wuhan: the other side of the story

“Can you connect me with any Pakistani student in Wuhan?”

This was the common request I was getting from my friends and colleagues working in media houses of Pakistan. I came to Beijing in September of last year to do a PhD in Communication Studies. Four months later, I saw China battling a novel coronavirus which we all today know as Severe Acute Respiratory Syndrome Coronavirus 2 (SARS-CoV-2).

Some of my friends in the media took my comments too for their stories on the situation of Pakistani students in China but I was living in Beijing, 1,115 km away from the virus-hit Wuhan. They were more interested in connecting with someone from Wuhan. Soon, we realized the media was interested in the ‘we are dying here’ statements only. Many of the students stopped talking to the media as it was not helping them; instead, it was making their families in Pakistan more worried.

Hira* completed her PhD in December from a university in Wuhan. She had booked a flight of late January which got cancelled after the city was put into lockdown. The university had stopped her stipend as she had graduated. Her university allowed her to stay on campus for free the whole period.

‘It was tough. The university was helping us at every level. They gave us masks, sanitizers, and anything we wanted to get from outside. My problem was a bit different. My stipend had stopped. I did not know how long the quarantine would go. I requested the embassy to at least send us (those who had graduated) to Pakistan. We had nothing to do here,’ she said.

She finally left Wuhan on the first flight of Pakistan International Airlines on 19 May 2020. She spent her quarantine talking with Pakistani girls in a WeChat group. That was the time when some students from Wuhan University of Science and Technology released a video on social media in which they said they had limited food supplies and the government must evacuate them. I asked Hira if she was getting the groceries easily in Wuhan. 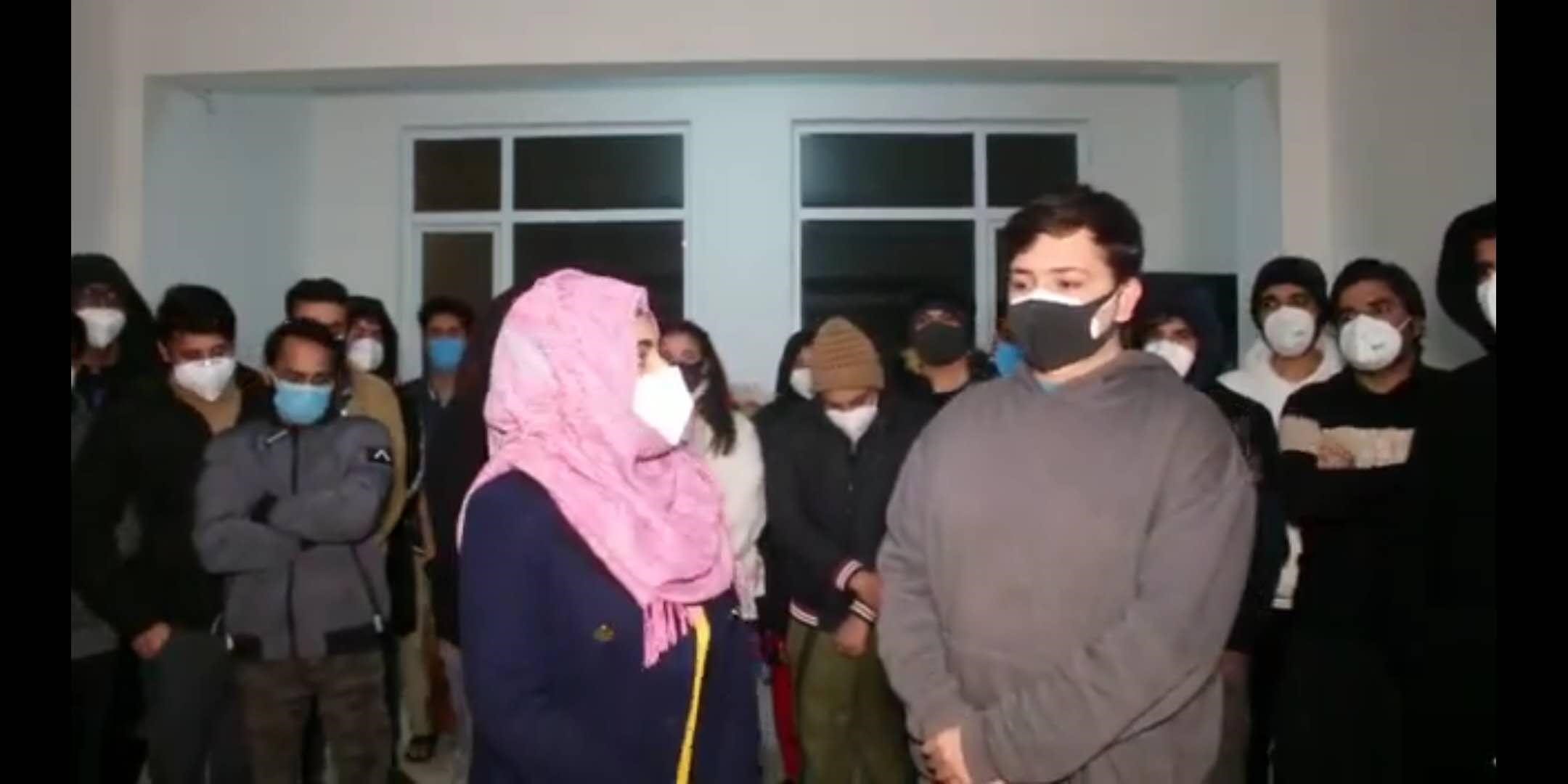 ‘Yes, that was not the problem. I had rice, pulses, and spices. I could also order groceries online. Prices of few commodities did go high but I would not say that I was not getting anything.’

Hira said the students were scared of the uncertainty of the whole situation. They just wanted to leave China.

Pakistan decided not to evacuate its citizens from Wuhan. The news was immediately picked up by international media. Deutsche Welle news published a video on their YouTube channel with the title ‘Is Pakistan abandoning its citizens in China?’. The anchor talked to a student from the Xianning city of Hubei province to know the living conditions in lockdown. He told him that he could not even go out of the campus and the city was in complete lockdown.

‘There is no transportation. Our city is totally locked down - no trains, no airports. We are just trapped in our rooms and no one is here to help us.’

Later, a TV anchor took senior journalist Shahzeb Jillani on the video link to get his comment on this issue. Jillani clearly said the real reason behind Pakistan’s decision to not evacuate its citizens from Wuhan was Pak-China friendship.

‘The official stance is that Pakistan does not want the disease to spread. It is acting under WHO guidelines and the Chinese have assured them that we will take care of the situation but the real reason we all know is the special relationship between China and Pakistan.’

No doubt, that was the main reason Pakistan refused to airlift its people from Wuhan. The government first announced to provide financial aid to students in Wuhan and later said it will also send food. The students did receive money but that was not equivalent to USD 840 which was promised. Each student in Wuhan received 3500 yuan which makes USD 496. However, eight students of the University of Chinese academy of sciences and twelve students of the Chinese Academy of Agricultural sciences did not receive this money till the end of March. They received the money after the issue was highlighted in a report of Independent Urdu.

The Pakistani media should have investigated these stories but it preferred to disturb our families in China. Social media influencers or bloggers were no different. Comedian Junaid Akram in a podcast while criticizing the government on its stance about students in Wuhan said that he received calls and messages from relatives of people living in China. He said that students in China had not much food to eat and that they were surviving on whatever rations they had. 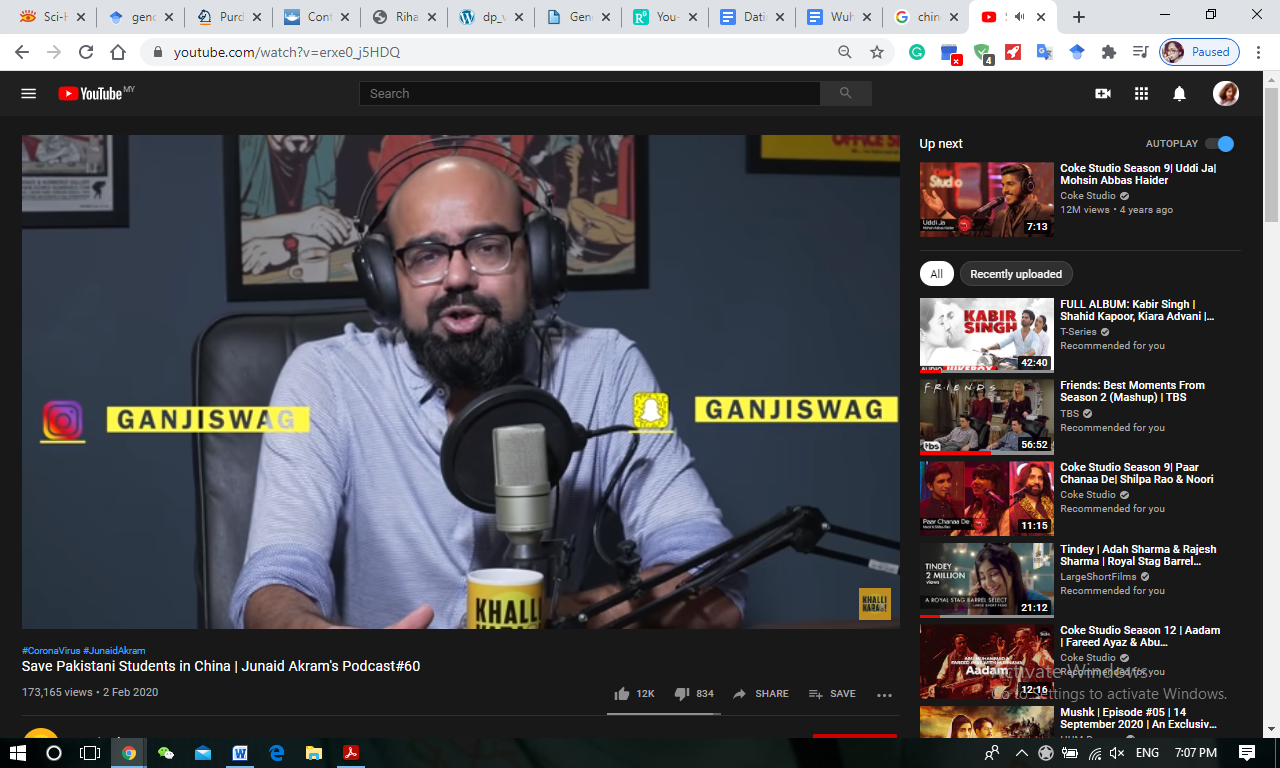 TV channels in Pakistan showed visuals from the video message of students from Wuhan University of Science and Technology in their news bulletins. Jamal Ahmed was a student of The Communication University of China in Beijing. His family told him to take the first available flight to Pakistan after they watched these reports on TV channels. Ahmed had to buy an expensive ticket and return to Pakistan; otherwise, he had planned to go after his graduation in July. He talked to a couple of journalists before his departure.

‘I told a journalist that China has even closed mosques so people could not gather at any place. The reporter wrote in their report that Muslim students are even not allowed to go to mosques in China. I contacted the person and asked them to correct it. They changed it after half an hour.’

Ahmed stopped watching TV after he returned home. He said watching TV during the outbreak was creating more panic than the virus itself.

Nazish Zafar of BBC Urdu says the media was taking information from the videos students were posting on social media. She says those videos had different messages – some students wanted to come back, and some did not. The media preferred to stay with the videos, which showed panic, helplessness, and fear.

Sisters Sehar Iqbal and Mehar Iqbal are studying Chinese literature at Wuhan University.  They started vlogging in January. They released a video on 26 January 2020 in which first, they showed the masks their university had given them. Later, they went out of the campus to buy groceries for lockdown. They say we don’t know how long we will have to live like this. In their next video, they talked about the situation of foreigners in Wuhan. They said the situation was not as bad as it was being shown.

‘Our teachers are taking care of us. The whole Pakistani community of our university is in a WeChat group. Our representative took details of each student and forwarded it to the embassy. It’s not like we are alone here.’ 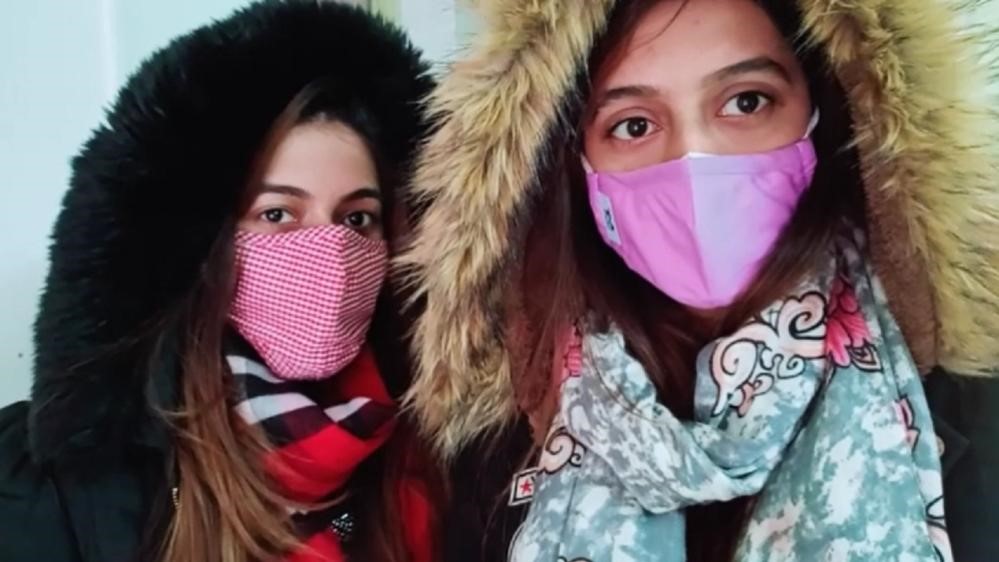 Both sisters, Sehar Iqbal and Mehar Iqbal share screen in one of their video on YouTube: Screengrab

They also told that the university had opened its cafeterias and supermarkets which normally are kept closed during summer and winter vacations. Dawn news shared their video in a news story. Aljazeera also published their video on its website and social media platforms on 3 February. This video became the most-watched video on its Facebook and Twitter accounts that week. Both sisters talked to many media houses after that giving the same stance that the situation was not as bad in Wuhan as the media was showing.

They shared screenshots of a few messages they had received on the Chinese messaging app WeChat with me. In one message, a student told them to take permission from him before giving any comment in the media. The student has written in his message that even male students take his permission before talking to the media. He also wrote that the girls were disrespecting him for not doing so.

Iqbal sisters told me that that particular student is still in China. He did not go back to Pakistan when the plane finally arrived in Wuhan.

A friend of them sent them a message to tell that many members of the Pakistani community had asked him for their fathers’ mobile number. Apparently, they wanted to call him to stop their daughters.

They also received a message from a Chinese number on their WhatsApp in which the sender said that they were not supporting their brothers and sisters. In a friend request on WeChat, a person not only abused them but also threatened to leak their biodata.

The girls said that their WeChat id and WhatsApp number was already shared in the Pakistani community. Some students even called their house and talked to their parents.

The girls were in touch with an official in the embassy of Pakistan in Beijing. They shared these screenshots with the officer. The official did not do much except calling the dean of their department who called them and assured of his full support. Iqbal sisters did not file any complaint to the International Students Office of their university. They said they were so afraid and they did not want any of those threats to come true.

Both sisters appeared in Zara Hat Kay of Dawn News on 9th April 2020. In this show, they mentioned that they were receiving threats for their comments. They also told the hosts how their university was taking care of them during the peak of the outbreak.

While talking to me, they said that their university was providing three-time meals, masks, sanitizers, fruits, sanitary napkins for female students, and diapers for the families with children.

A PhD student of their university who wishes to remain anonymous and who had sent them a threatening message said that the community had decided to put pressure on the government through the media for their evacuation.

‘The whole situation was uncertain here. Everything was closed at that time, and we had no idea when things will come to normal at that time. No student from Wuhan University said that they were not getting food supplies. Some of us had medical issues; three women were pregnant. The outbreak was putting them into depression. Some people were above 40 years of age. That is why the community here was pressurising the government for evacuation.’

I also asked him about the threats Iqbal sisters were receiving for not following what the community was directing and sticking with their comments. He said it might have happened and no one should be blamed for it. It was the uncertainty and the fear of getting an infection that made them harsh.

This single event tells us how user-generated content can affect media reports if not verified or cross-checked. The Iqbal girls went through a lot, more than any of us whose families would call them hysterically after watching TV reports about our situation in China. That was a tough time. It has passed, but we have lost our faith in the media of our country.

*Names were changed to protect the privacy of the individual(s)