June 1, 2018 - Comments Off on Open Letter to Twitter: Please Do Better about Misinformation during General Elections 2018

Open Letter to Twitter: Please Do Better about Misinformation during General Elections 2018

We heard that you want to do better in making Twitter an inclusive platform. We heard that you have updated your strategy to fight trolls to make it a safe space for everyone. And we also heard that you are committed to fight fake news, especially after what Facebook has gone through in the past couple of months. We, for one, were glad that you are at least trying. But are you?

Facebook is taking the heat for allowing user data to be misused during the democratic processes worldwide, but do you think you have done better? We are talking particularly in the context of fake news through fake accounts that Twitter very conveniently allows to exist on its platform. The biased community standards suspend the accounts of women speaking up against trolls in the language they understand, but trolls operating under the shadow of fake accounts keep making use of the platform without facing the consequences of the said standards.

Pakistan is going to have its General Elections in almost 2 months from now, and what we are seeing today is an orchestrated political campaign through fake accounts on Twitter; case in point the convicted rapist of a former Pakistani film actress being appointed in one of the political parties running for the office and later being expelled after an outrage on social media and subsequently on mainstream media. What went wrong here is that during this appointment and expulsion of the rapist, a fake account was setup in the name of the artist who was forced to leave the country after her brutal rape, commending the actions of the political party to expel the rapist. Here’s the screenshot of the tweet, and the link to it in case you actually decide to take action against fake news: 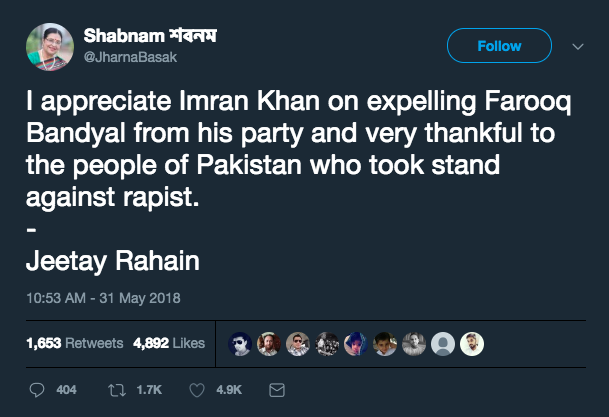 You may want to consider the number of reactions on this tweet in a couple of hours, and the impact this misinformation has been making among Pakistanis. The tweet was subsequently picked up by local mainstream media and stories were published and aired within hours.

While this may not seem a big issue by the face of it, but this incident is particularly giving leverage to the political party in consideration, and your platform is the core tool for it. It’s taking away people’s agency to make decisions on their own - overshadowed by misinformation.

Let us reiterate - a political party appointed a convicted rapist and is being celebrated for it because the army of fake accounts on Twitter is pitching for a narrative that will promote this party as being better than others. Would you not agree that it’s against the very principles of democracy that we all advocate for?

Shabnam, the legendary artist who was forced to leave the country after her rape by this influential politician, has been snatched of her agency to voice her concerns during this fiasco. This particular fake account (@JharnaBasak) brought her experience down to a political agenda that only suits the people who benefit from it in current political environment closer to the elections. And not only the political goons are celebrating this incident but also human rights defenders; “Good effort by PTI [Pakistan Tehreek-e-Insaf]”, said one women’s rights activist. Twitter has become a tool that has taken away people’s ability to think rationally. While the convicted rapist shouldn’t have been appointed in the first place, your platform has paved way for people to shrug off the problems that this part of the world has been struggling with for generations - violence against women - and honour the forced measures of rectification under the pretence of awareness.

In such instances, efforts to curb misinformation, abuse and trolling by platforms like Twitter become particularly relevant for them being the primary source of news for people. At this point, we are reminded of a remarkable research by Science Magazine featured in The Atlantic in March 2018 that says, “By every common metric, falsehood consistently dominates the truth on Twitter [...].” It’s evident that the problem has been around since the advent of Twitter, but we ask you, what have you done to improve this, if anything at all?

We want you to actually take action and set the case straight that false information is not welcomed on your platform that is trusted and used by millions across the world.

Pakistan is a fairly new democracy that struggles to keep the reigns of its democratically elected government in place, and has successfully completed the tenure of the second government of the said kind. It wasn't easy, and let us tell you - it was ugly, to say the least. But we did it, and we hope that the next government will do better, because democracy is what we strive for, and democracy is what we want in all the processes that we opt for. And because Twitter holds a strong presence in the country, it remains one of the platforms that influence people's decisions.

We hope that you will do better and give people a chance to make their democratic decisions independent of any influence through misinformation propagated through your platform.

Sincerely,
Concerned members of a democratic country that is Pakistan.