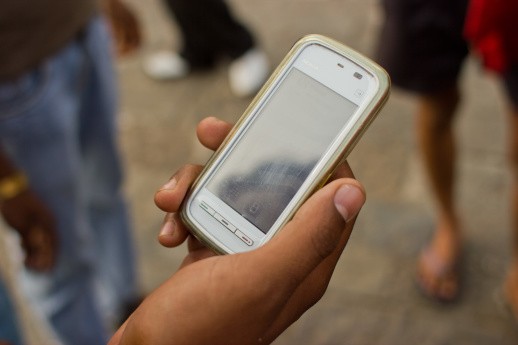 April 30, 2016 - Comments Off on Know a country where women can get killed for using mobile phones

A man stabbed and killed his 16-year-old sister on Wednesday because she was using a mobile phone. While to some the very idea may sound ludicrous, to many Pakistanis this is just another day.

Technology related instances of violence are not scarce in Pakistan, although many are not reported. The case is the most recent example of women paying the price for using digital tools such as cell phones, laptops or computers.

Hayat Khan, the 20 year old in question, threw the body out of his house in plain sight. His sister breathed her last as neighbours scrambled to help. While the Digital Rights Foundation condemns the incident and finds the behavior of the brother in question absolutely repugnant, we also know that such kind of cases are nothing unique.

Media has reported that Khan had asked his sister who she was talking to on the phone. When she responded that it was none of his business she paid the price with her life. Khan said that he had originally intended to only scare her with a kitchen knife but somehow ended up killing her instead. While he claims that he feels immense grief, the fact that he chose to throw his sister outside the house instead of finding her medical help tells another story.

Already, the father of the girl has said that he has forgiven his son for his crime. Interestingly, the police has made itself the complainant in this case so that the relatives of the victim cannot forgive the assailant. Many a times, men who have committed murders in the name of honour killing go scot-free because the family officially pardons them. Moreover, in other cases blood money is offered in return for freedom - and it is currency that is widely accepted. Under the legal loopholes present in Pakistan's laws women have lost their lives repeatedly under the guise of honour.

In Pakistan, women’s access to technology can lead to violence. Our work through our Hamara Internet project has helped alert us to many such cases where use of technology endangered a young woman’s life. In 2013, two sisters were killed in Gilgit because a video of them playing in the rain was leaked - the assailants included their step brother who felt that they had dishonoured the family.

In another case, a woman asked her  husband to kill her for 'honour' after a video of her an another man getting intimate was released. The incident took place in February in Khyber Pakhtunkhwa. The husband turned himself in and told the authorities he felt no regret or shame over his actions because his wife had told him to restore his honour by ending her life. Whether the woman truly did ask for her own death can never be ascertained for sure.

We have come across many instances of young women fearing for their lives over reasons entirely out of their control. In cases of blackmail, online harassment, and even revenge, there is a higher likelihood of families taking action against the victims instead of supporting them.

Examples where use of technology has led to a woman's death are countless. Who should know this better than us. However, this culture of blaming the victim has to end - this culture of violence against women needs to be stopped - and it is high time we started taking women’s access to technology and information as their fundamental rights, and not privilege.

The question we must ask ourselves is this: how many more women need to die before using something as mundane as a mobile phone stops being controversial? How many more will be blackmailed, harassed, and yes, killed, before women's existence in digital spaces is acceptable? The time is now to right back against patriarchy and the time is now to reclaim online spaces.