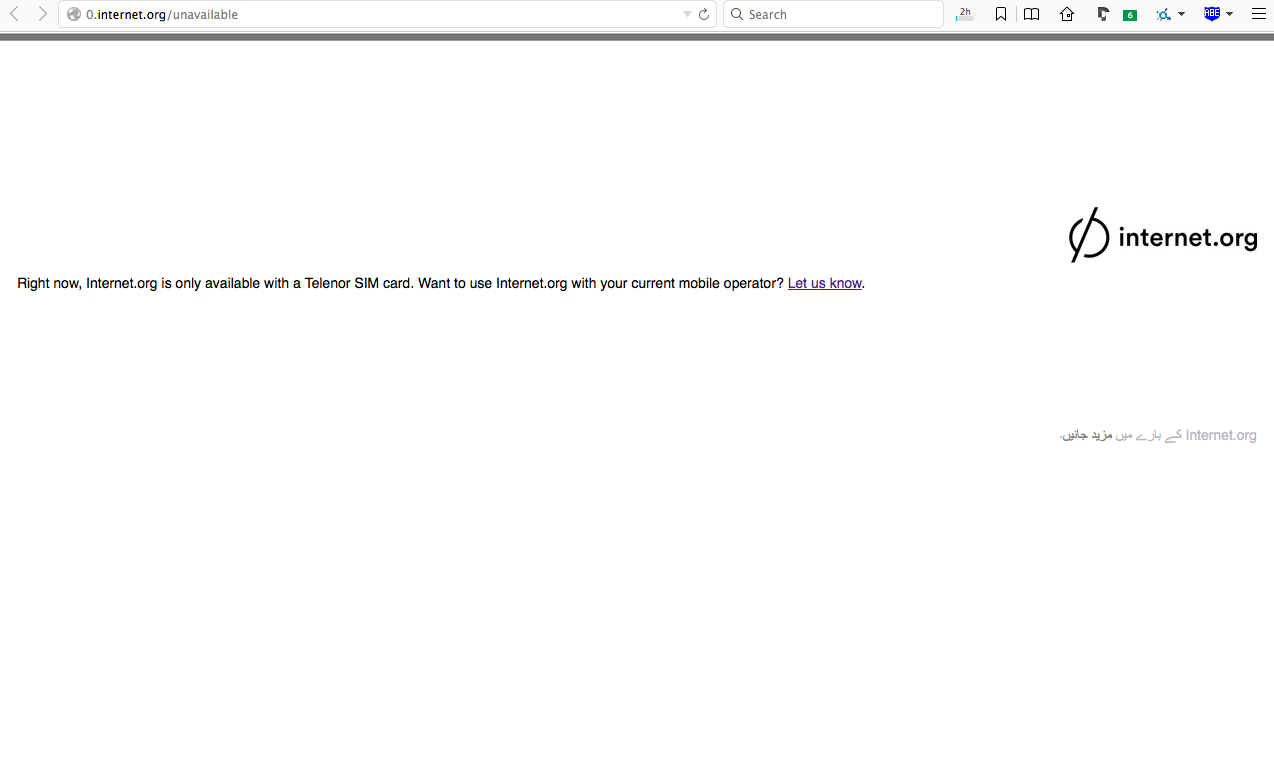 On May 28th, Telenor Pakistan (a wholly-owned subsidiary of the Norwegian telecommunications Telenor Group) formally announced that it had partnered with Facebook on the latter's Internet.org initiative. According to Facebook and its partners, the objective of Internet.org is to provide selected internet services for free. At first blush, this comes across as a boon for citizens in the developing world, where data services can be expensive for many. Being able to access the internet without running up large bills, and without draining one's monthly data package allowance sounds ideal. By signing up to Internet.org, Telenor's mobile subscriber base in Pakistan – which at last counts comes close 35.2 million – will have access to a list of websites and internet services, which Techjuice has listed here. With Telenor as a start, more people in Pakistan will have greater access than ever before, and for next to nothing.

Beyond the altruistic sentiment, however, all is not well. Rather than giving people greater choice, in reality what Internet.org and its backers are offering is limited and leaves everyone worse off, down the road, creating and encouraging two-tier internet access that, in the long run, makes losers out of us all. Pakistani Tech activists and entrepreneurs have expressed their dismay Facebook and Telenor's launching of the initiative. Arzak Khan of Internet Policy Observatory Pakistan, for instance, expressed deep concern “that an established operator like Telenor is joining Facebook's Internet.org initiative and launching what is a limited and insecure internet. The impact of such a move will stifle investment in infrastructure development and threaten freedom of expression, equality of opportunity, security, privacy and innovation."

“We don't support Internet.org”, say activists such as Sana Saleem of Bolo Bhi. “I believe that they are changing the way that people will access internet in the future for the next billion they are making internet insecure and  limiting their access by suggesting that only these few websites and apps are approved by Facebook, it is against the principle of Net Neutrality and it limits people’s access."

The belief that internet service providers should not discriminate between different forms of content, thus guaranteeing a level playing field for all websites, is one of the key guiding principles behind the preservation of a free and open internet. This belief, known as Net Neutrality, is what ensures that your access to Dawn.com is the same as your access to Express Tribune, or Project Gutenberg. By not favouring or blocking a particular website or service, people are able to access the internet with the freedom of choice, regardless of financial or social background. By offering a select number of websites and services for free solely to people that have subscribed to one of its partners, Facebook is acting in direct violation of the concept of Net Neutrality, by favouring some websites/services and denying access to others. Should Telenor Pakistan subscribers choose to visit websites or services that are not on the proscribed list, they will have to do so outside of Internet.org. What Internet.org offers is the opposite of Net Neutrality, and is known as Zero Rating, defined by Access Now as “the practice by service providers of offering their customers a specific set of services or applications that are free to use without a data plan, or that do not count against existing data caps.” The nature of zero rating has meant that it has been banned or restricted in countries such as Canada and the Netherlands. Nonetheless, this discriminatory practice has been received with open arms in Pakistan. To quote Ghaus Iftikhar Nakodari, Founder of Jumpshare:

“The walled garden approach of making a select few websites available for free will hurt businesses who work so hard to compete in their market. If this trend takes off, I am afraid internet providers will start charging for access to batches of websites in future.”

A internet gateway such as Internet.org makes censorship by governments easier, with what Access Now call a “single centralised checkpoint” for information. Facebook itself has been targeted by and taken down by several governments for “allowing” politically sensitive content. Pakistanis that would use Internet.org to access websites and services that are sensitive in nature could find themselves blocked individually or en masse.

Facebook itself has a notoriously bad reputation in regards to the privacy of its users. Privacy settings have been changed in the past without informing users in advance, with private messages becoming public. Terms and conditions have also been modified in the past without warning. The nature of Facebook's business model, furthermore, is reliant on user data, which is in turn provided to third parties. It is quite likely that Internet.org will collect user data via services and IOS/Android apps. The lack of proper transparency in regards to how that data will be used by Internet.org and partnering companies should disturb many, due to the potential for surveillance without consent.

Surely Facebook is aware of the privacy concerns of many, and will strengthen security for the benefit of its users? Well, as Access Now and the Electronic Freedom Foundation have pointed, not really. Each points out that the current version of Internet.org does not permit HTTPS (HTTP Secure), SSL (Secure Sockets Layer) or TLS (Transport Layer Security) encryption protocols. If one is sending sensitive personal data – emails, credit card purchases etc – over the internet, these encryption protocols ensure the security and integrity of your web traffic, without the risk of being eavesdropped upon by government agencies or malicious hackers looking to steal your details. By not allowing these protocols, Internet.org users are at danger each time they access websites and services via Facebook's offering.

Internet.org is not without its supporters. There are those defend Facebook and its partners, saying that this opens up the internet to those that could not afford to access it in the past. As internet services become more crucial to our lives, access is indeed essential. Defenders of Internet.org also argue that once people have tried out Internet.org, they will be able to move onto the “proper” internet, having had a taste. The problem here is that should more telecoms providers move towards Internet.org and similar initiatives, it becomes more lucrative for telecoms and internet service providers offer zero rate internet. Should a Telenor subscriber choose to access a website or service not offered by Internet.org, they may be subject to the usual higher data package costs, thus discouraging them, depending on whether or not they can afford to be charged. And according to Asad Baig of Media Matters for Pakistan:

“in such a scenario, when certain service providers in partnership with initiatives like Internet.org, provide access to certain websites 'free of charge', its very difficult to make consumers understand the implications regarding access. Such services are generally perceived as 'consumer friendly' and that's exactly what makes net-neutrality advocacy in Pakistan so difficult."

Rather than offering greater choices to people, Facebook and Internet.org not only put privacy, security and the freedom of expression of internet users at risk, and seeks to make access decisions for the users instead, penalising them should they choose otherwise. Saad Hamid of Invest2innovate provides an analogy:

“Imagine going to any public park in Pakistan for 5 rupees and one day the fee is waived and you can go to certain parks for free. Seems awesome right? It does feel good today being a customer but what happens one day when the fee is introduced again - would you pay for it? This is exactly the concern with Internet.org - it's helpful to the user in the short term and it's highly damaging to businesses and startups who want to develop a tendency among users to pay for services.”