May 20, 2020 - Comments Off on Evidence of Twitter, Periscope and Zoom restrictions in Pakistan

Evidence of Twitter, Periscope and Zoom restrictions in Pakistan

Network data from the NetBlocks internet observatory confirm that Twitter, Periscope and Zoom were restricted on multiple internet providers in Pakistan on the evening of Sunday 17 May 2020, commencing approximately 18:30 UTC and lasting over an hour. This report produced in partnership with the Digital Rights Foundation presents findings on the schedule events.

It is shown that the Zoom restrictions appear technically unrelated to international issues that affected call quality earlier in the day. Further, it is shown that Twitter, Twitter’s image and video servers, Twitter’s streaming platform Periscope and the Zoom videoconferencing website share the same timeline of disruption, consistent with previous documented social media platform disruptions in Pakistan.

📄 Report: Evidence of nation-scale Twitter, Periscope and Zoom disruption across #Pakistan on 17 May 2020.

Analysis of network data with @DigitalRightsPK confirms no international outage at time of disruption and establishes a timeline of events.https://t.co/Geub2awRMD

Sunday’s incident matches the characteristics of previous documented restrictions applied on grounds of national security or to prevent unrest such as the Pakistan’s November 2017 social media blackout.

What happened on Sunday?

Users were able to regain access using VPN tools which circumvent national censorship or filtering mechanisms. During this period the #TwitterDown hashtag trended in Pakistan.

A real-time incident alert was issued by NetBlocks presenting initial findings which are developed and examined further in the present report:

How does this relate to international outages?

Zoom experienced technical issues earlier on Sunday affecting certain types of meetings on the service for a limited subset of users. The company issued an update at 15:43 UTC confirming that the problem was resolved, hours prior to the onset of social media disruptions in Pakistan.

No widespread user reports of outages are evident in other countries at the time of Pakistan’s social media blackout. NetBlocks performance metrics from around the world show that Sunday’s disruption was localized to Pakistan: 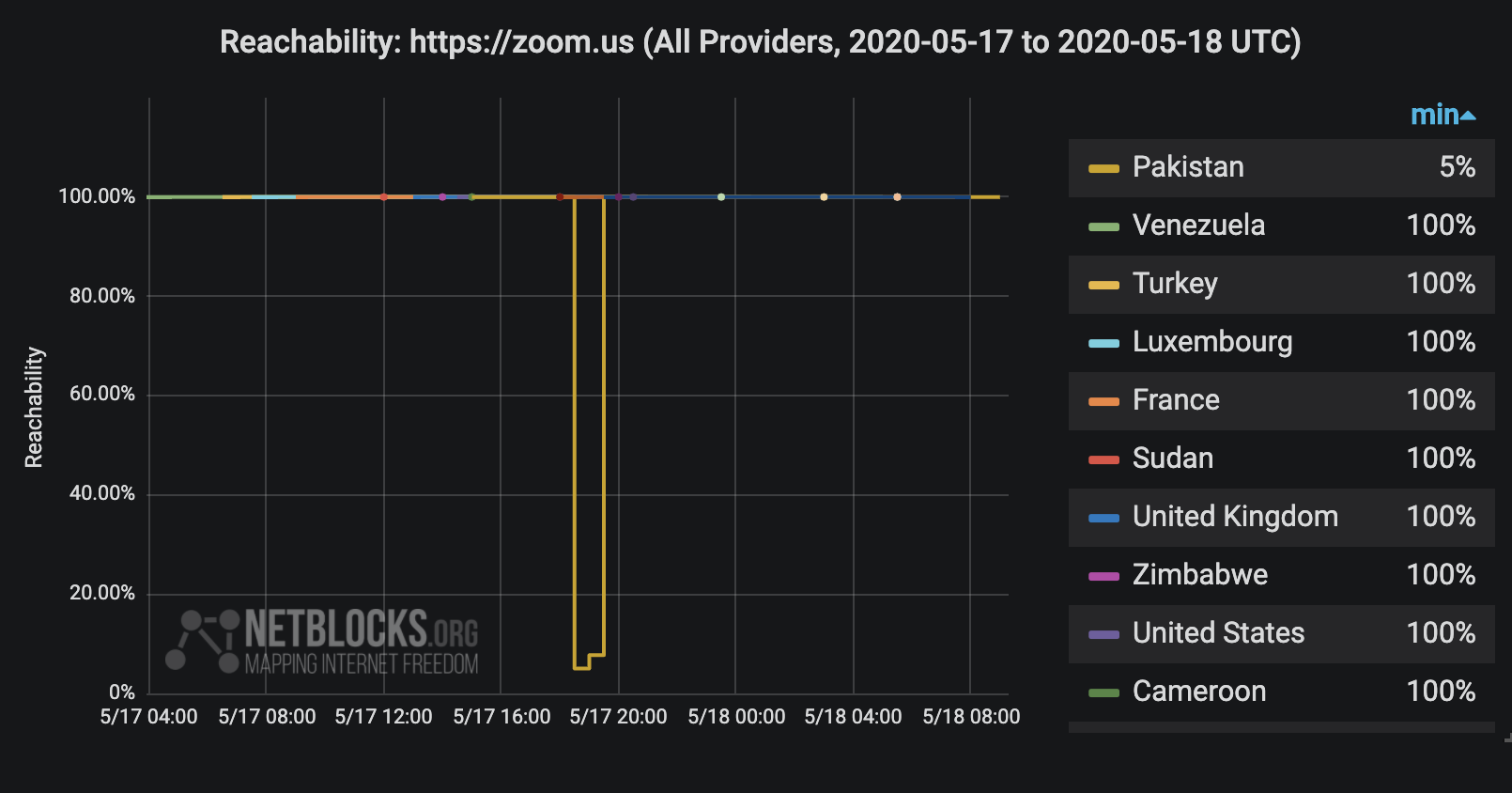 A closer examination of the specific time interval for Sunday’s disruption in Pakistan also shows no restrictions or disruptions in effect outside of Pakistan: 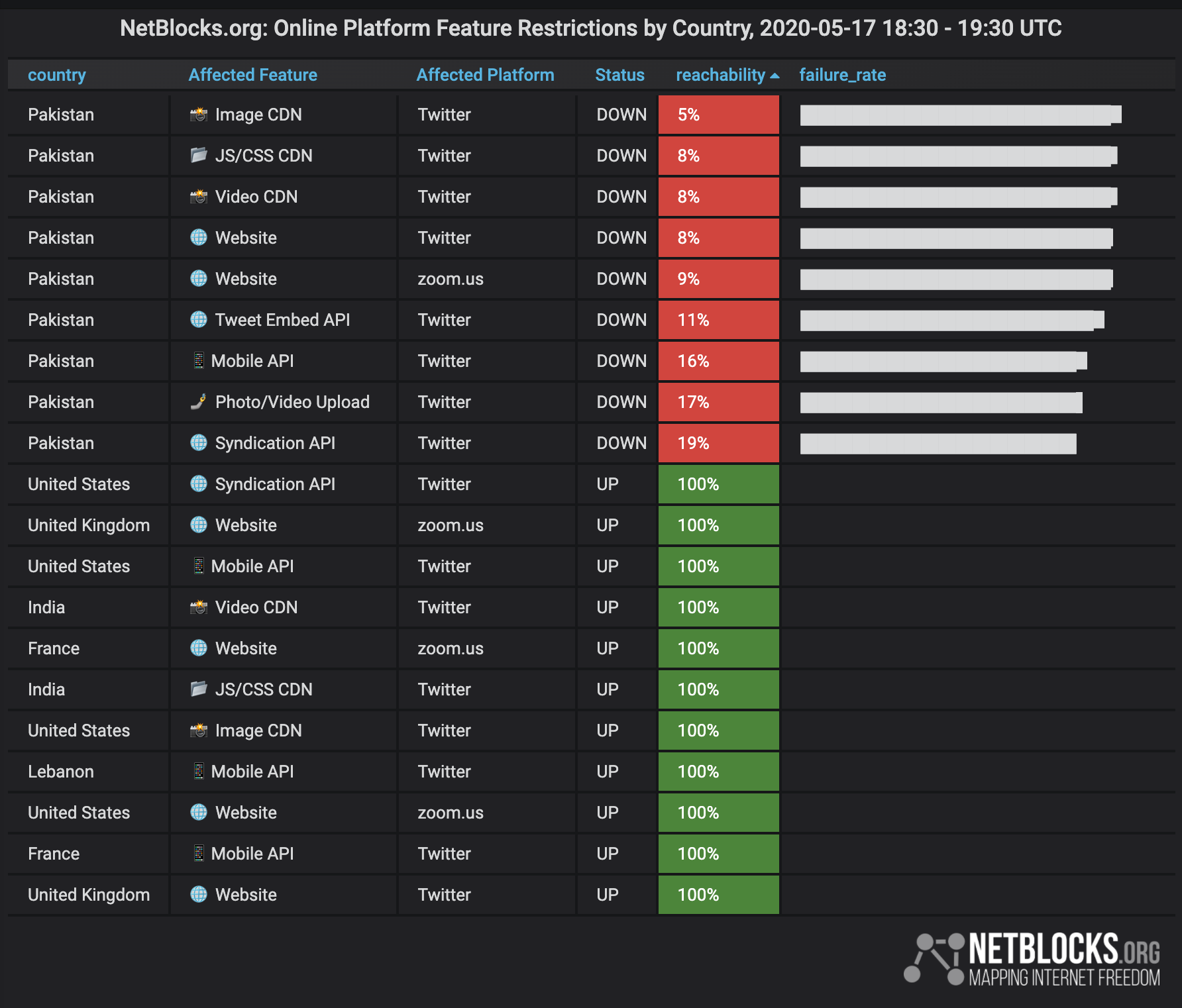 Additionally, timings show that the services were disrupted in the same time window in Pakistan, and restored at the same moment: 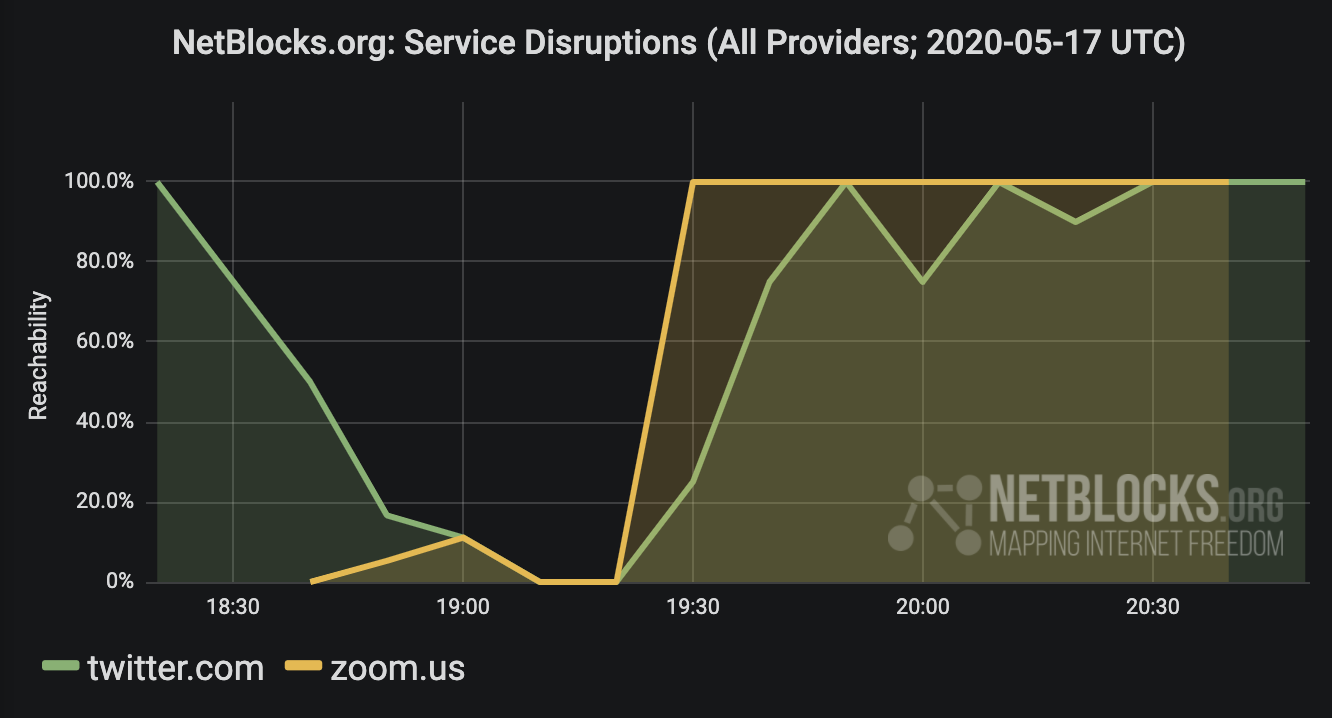 Findings are drawn from a core sample of 300 network performance measurements observed from 30 network/location pairings across Pakistan supplemented by a wider dataset of international metrics for comparative use.

Why were Twitter, Periscope and Zoom disrupted in Pakistan?

No explanation or legal order has been presented by authorities or network operators at the time of writing.

Pakistan has previously implemented similar restrictions during mass-protests and limits internet access each year during Ashura. However, no protests were held on Sunday and public manifestations are unlikely as Pakistan remains under partial lockdown in response to the COVID-19 pandemic.

Researchers note that the timing of restrictions as well as the set of platforms affected coincide with a “virtual conference” critical of Pakistani policy held via Zoom, shared on Twitter and reportedly streamed via Periscope on Sunday evening.

News report suggest the virtual event generated controversy in Pakistan, stoking tensions between Indian and Pakistani political activists. Nevertheless, a nation-scale social media blackout in response to a virtual event would be a notable development for Pakistan.

NetBlocks encourages network operators and governments to report disruptions and their legal basis, where available, in a transparent manner in keeping with international standards.

This investigation is conducted by NetBlocks and the Digital Rights Foundation.

Internet performance and service reachability are determined via NetBlocks web probe privacy-preserving analytics. Each measurement consists of latency round trip time, outage type and autonomous system number aggregated in real-time to assess service availability and latency in a given country. Network providers and locations enumerated as vantage point pairs. The root cause of a service outage may be additionally corroborated by means of traffic analysis and manual testing as detailed in the report.