November 12, 2019 - Comments Off on Eleven organizations from civil society create the Forum on Information & Democracy, a structural response to information disorder 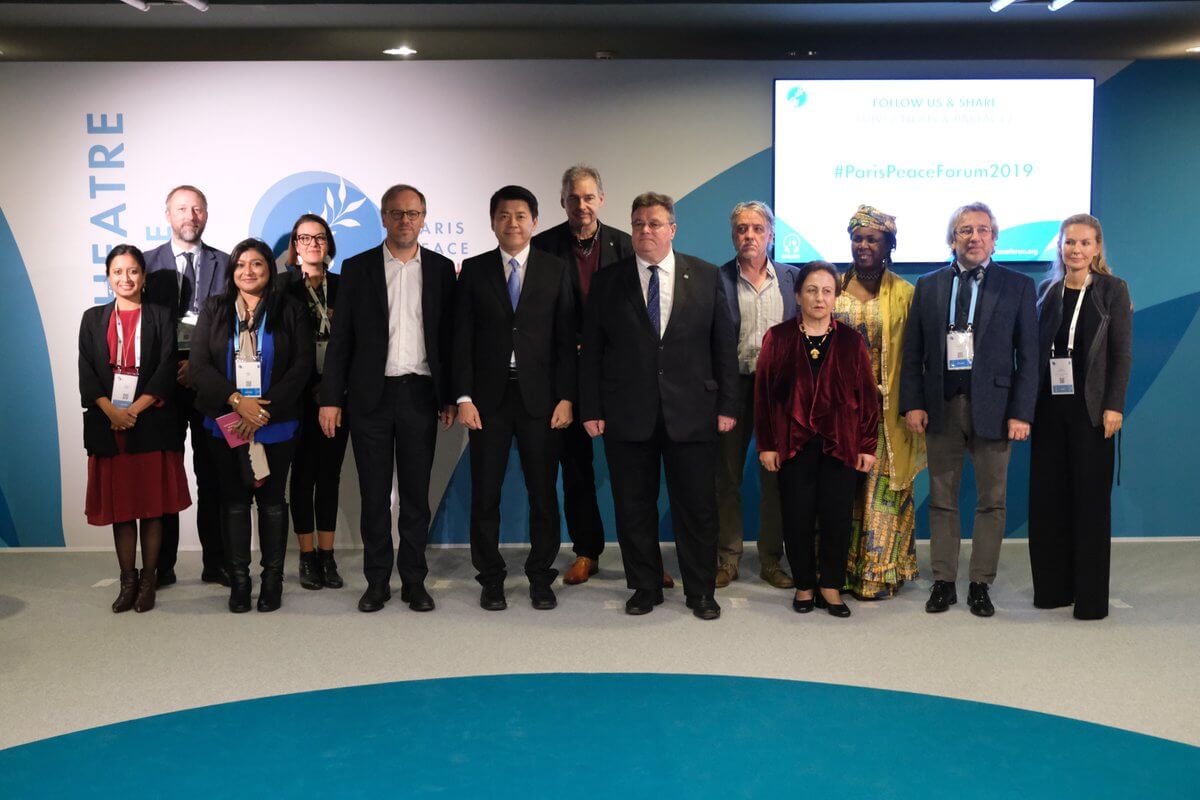 Eleven organizations from civil society create the Forum on Information and Democracy, a new international entity tasked to implement the principles of the International Partnership on information & Democracy, an intergovernmental agreement signed by a coalition of 30 States on the margins of the UN General Assembly last September. It is the continuation of the international process launched by Reporters Without Borders (RSF) in September 2018.

In the context of the Paris Peace Forum today, eleven organizations unveiled the newly created Forum on Information & Democracy. This new entity will issue recommendations for standards in order to encourage the regulation and self-regulation  of the space of information and communication. The initiative was welcomed by President Emmanuel Macron during his inaugural speech. He first quoted “the Partnership on Information and Democracy, launched by Reporters Without Borders and supported by governments” to illustrate “the importance of these new forms of cooperation”, “a concrete example of innovations that provide different actors to move forward together".

The association will be based in Paris and will implement the principles from the International Partnership on Information & Democracy, an intergovernmental agreement endorsed by a coalition of 30 States on the margins of the UN General Assembly.

The Forum’s Board of Directors elected the RSF Secretary general, Christophe Deloire as its President. Nighat Dad (executive director of Digital Rights Foundation) and Leon Willems (director of Free Press Unlimited) were elected as Vice-President and Treasurer.

In accordance with its bylaws, the Forum will evaluate the means, norms and architectures of the global space of information and communication; investigate respect for the principles of the Declaration and Partnership on Information and Democracy by the corporate entities that shape this space (the online platforms); and, above all, issue recommendations for governments, platforms and the media industry on how the norms that govern this space should evolve. It will encourage self-regulatory mechanisms and promote the social function of journalism.

The Forum’s permanent secretariat will set up working groups tasked with formulating recommendations for regulation and self-regulation in order to address new challenges brought up by technological disruptions and for which existing legislation is not adapted.

During the inauguration of the Forum on Information & Democracy,  the President of Latvia Egils Levits, the Minister of Foreign Affairs of Lithuania Linas Linkevičius, the Chancellor of South Korea’s National Diplomatic Academy, Kim Joon Hyung, and the Council of Europe’s Director of Democratic Governance, Claudia Luciani, recalled the importance of the Partnership. Some founding members,  including the CEO of the Institute for Strategic Dialogue, Sasha Havlicek, the Executive Director of the Peace Research Institute Oslo, Henrik Urdal and the Head of the Geneva office of CIVICUS, Susan Wilding explained the importance and the need for this new organization. Christophe Deloire and Shirin Ebadi, the co-chairs of the International Commission on Information and Democracy (see below), and three other members of the Commission, Can Dündar, Hauwa Ibrahim and Nighat Dad, also outlined the overall logic of the initiative and the central place given to civil society.

About the International Initiative on Information and Democracy

RSF launched this international initiative in September 2018 when it created the International Commission on Information and Democracy consisting of 25 prominent figures of 18 nationalities. This Commission is co-chaired by Christophe Deloire, RSF Secretary-General and Nobel Peace Prize laureate Shirin Ebadi.

Other members of the Commission include laureates of the Nobel Prize in Economic Sciences Joseph Stiglitz and Amartya Sen, the French jurist Mireille Delmas Marty, Honorary Professor at the Collége de France, journalists Maria Ressa and Can Dündar, and new technology expert Yochai Benkler, co-director of the Berkman Klein Centre at Harvard University.

The Commission drafted the International Declaration on Information and Democracy which received the support of twelve Heads of State and Government in November 2018, including Emmanuel Macron (France), Carlos Alvarado (Costa Rica), Bechir Caid Essebsi (Tunisia), Erna Solberg (Norway) and Justin Trudeau (Canada). It also received the support of the UN Secretary-General, Antonio Guterres, UNESCO Director-General, Audrey Azoulay, and the Secretary-General of the Council of Europe, Thorbjørn Jagland.

The ensuing Partnership for Information and Democracy was presented at the G7 summit in August 2019, winning the support of G7 members and the leaders of other major democracies also attending the summit.

On the Forum’s founding members

The Centre for International Governance Innovation (CIGI) is an independent, non-partisan think tank whose mission is to build bridges from knowledge to power by conducting world-leading research and influencing policy makers to innovate. CIGI is headquartered in Waterloo, Canada and has a global network of partners and researchers based around the world. Our peer-reviewed, evidence-based research focuses on digital governance issues relating to the global economy, international law and global security. In collaboration with strategic partners and support received from the Government of Canada and founder Jim Balsillie, our research covers some of the most important issues of our time such as artificial intelligence, platform governance and multilateral trade.

With headquarters in South Africa, and hubs in New York and Geneva, CIVICUS is a global alliance of civil society organizations and individuals dedicated to strengthening citizen action and civil society for a more just, inclusive and sustainable world.  The alliance works to protect the fundamental civic freedoms that allow us to speak out, organize and take action. We do this by defending civic freedoms and democratic values; strengthening the power of people; and empowering a more accountable, effective and innovative civil society.  We strive to promote excluded voices, especially from the Global South, and have a growing alliance of more than 8000 members in more over 175 countries.

About the Digital Rights Foundation

The Digital Rights Foundation (DRF) is a registered research-based advocacy non-governmental organization in Pakistan. Founded in 2012, DRF focuses on ICTs to support human rights, inclusiveness, democratic processes, and digital governance. DRF works on issues of online free speech, privacy, data protection, surveillance and online violence against women. DRF opposes any and all sorts of online censorship and violations of human rights both on-ground and online.

Free Press Unlimited is a Netherlands-based media development organization that works in more than 30 countries and strives  to ensure that impartial news and information are available to people across the globe, particularly in countries where there is no to little press freedom. By supporting local media professionals and journalists, Free Press Unlimited aims to help people gain access to the information they need to survive and develop.

About the Human Rights Centre at UC Berkeley School of Law

The Human Rights Center at the University of California, Berkeley, conducts research on war crimes and other serious violations of international humanitarian law and human rights. Using evidence-based methods and innovative technologies, we support efforts to hold perpetrators accountable, protect vulnerable populations, and amplify the voices of survivors. We seek to close research gaps in global understanding related to refugees and immigrants, indigenous people, workers, women, survivors of trafficking and sexual violence, and other targeted populations. Our Investigations Lab trains students how to find and verify photographs, videos, and other social media sources to investigate potential international crimes, monitor hate speech, and counter disinformation for major NGOS, legal entities, international bodies, and media. We are working with the United Nations Office of Human Rights to develop and publish the first international protocol on open source investigations.

About the Institute for Strategic Dialogue (ISD)

The Institute for Strategic Dialogue, launched in 2006, is now the leading global ‘think and do’ tank dedicated to understanding and innovating real-world responses to the rising tide of polarisation, hate and extremism of all forms. ISD combines anthropological research, expertise in international extremist movements and an advanced digital analysis capability that tracks hate, disinformation and extremism online, with policy advisory support and training to governments and cities around the world. ISD also works to empower youth and community influencers internationally through its education, technology and communications programmes, including a range of initiatives run in partnership with MIT, Google, Microsoft and Facebook. At the same time ISD is working with a number of governments to design and mount digital policy and regulatory solutions to the algorithmic amplification of polarisation and extremism online.

OBSERVACOM (Latin American Observatory for Regulation, Media and Convergence) is a nonprofit, professional and independent regional think tank, specialized in regulation and public policy related to media, telecommunications, Internet and freedom of expression. We approach these issues from a rights perspective and prioritize aspects related to access, diversity and pluralism. OBSERVACOM is composed of experts and researchers committed to the protection and promotion of democracy, cultural diversity, human rights and freedom of expression in Latin America and the Caribbean.

About the Open Government Partnership (OGP)

In 2011, government leaders and civil society advocates came together to create a unique partnership—one that combines these powerful forces to promote accountable, responsive and inclusive governance. Seventy-nine countries and a growing number of local governments—representing more than two billion people—along with thousands of civil society organizations are members of the Open Government Partnership (OGP).

The Peace Research Institute Oslo (PRIO) conducts research on the conditions for peaceful relations between states, groups and people. Founded in 1959, PRIO is an independent research institution committed to academic excellence and known for its effective synergy of basic and policy-relevant research. PRIO further conducts graduate training and is engaged in the promotion of peace through conflict resolution, dialogue and reconciliation, public information and policymaking activities.

About Reporters Without Borders (RSF)

Reporters Without Borders, also known under its French name Reporters sans frontières (RSF), is an international non-governmental organization defending freedom, independence and pluralism of journalism. Recognized as a public utility in France, RSF enjoys consultative status with the UN, UNESCO, the Council of Europe and the International Organisation of La Francophonie. Headquartered in Paris, RSF has offices in 14 cities around the world and correspondents in 130 countries.

Research ICT Africa conducts public-interest research on the digital economy and society that responds to national, regional and continental needs. We provide relevant stakeholders with the information and analysis required to develop flexible and adaptive policies and regulation to deal with an increasingly complex and dynamic digital environment. Our network contributes to the gathering and analysis of data and indicators to establish a repository of knowledge for furthering research and digital governance.