April 24, 2019 - Comments Off on DRF released its report on ‘Female journalists in new media: experiences, challenges and a gendered approach’

DRF released its report on ‘Female journalists in new media: experiences, challenges and a gendered approach’ 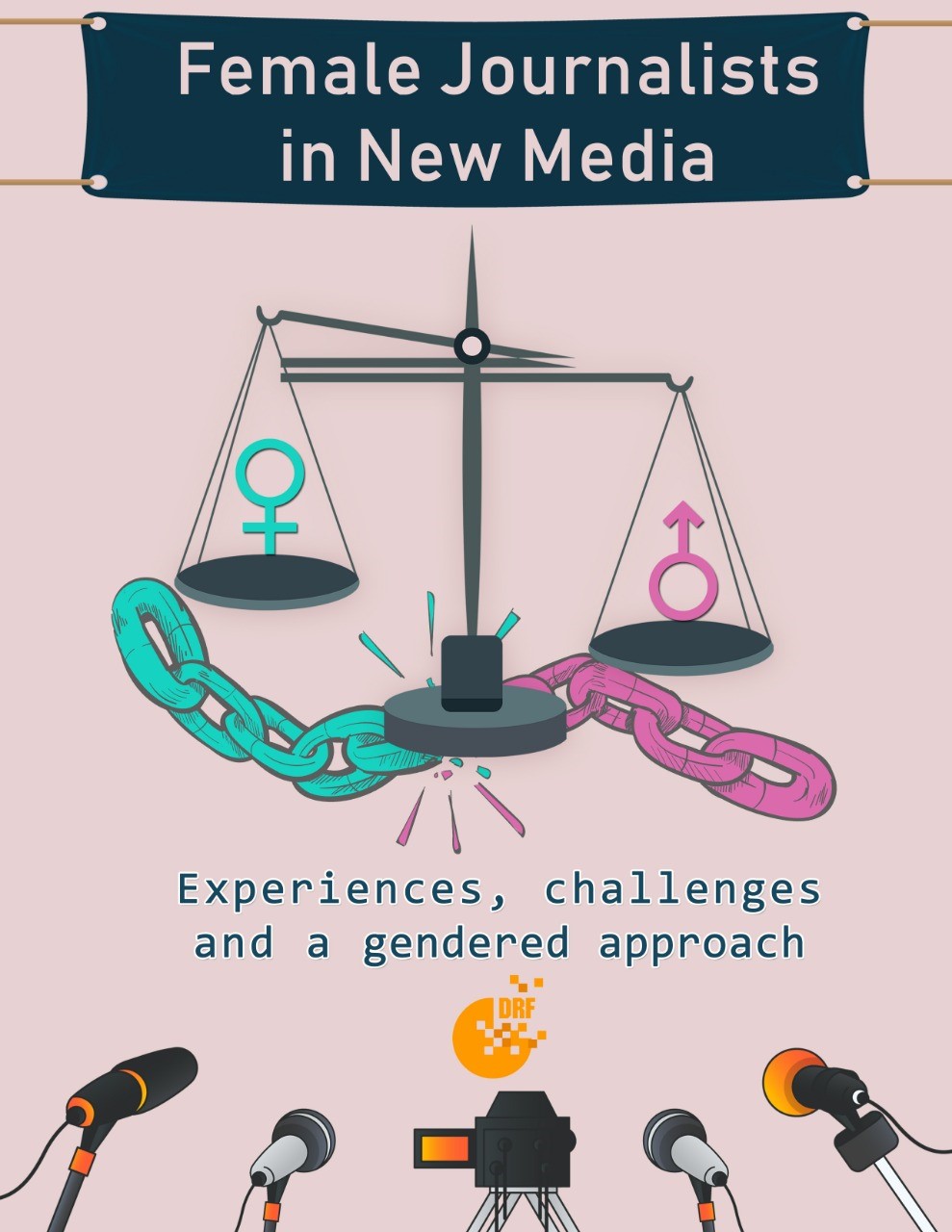 Digital Rights Foundation (DRF) has launched its report on the gendered, online harassment that female journalists face in the media and how this resonates in their offline spaces in the report titled, ‘Female Journalists in new media: Experiences, challenges and a gendered approach’. The report aims to generate a much needed debate around the problems that women journalists face in the new media and how they often have to take a step back from the media due to their vulnerable position in the field.
The report records the experiences of female journalists in a qualitative manner in order to understand the kind of harassment and intimidation women face in the digital platforms due to their work. It also explains how online violence of female journalists translates into offline violence. The report talks about how there are numerous issues that women face in their field like trivialization of gendered issues by their male counterparts and limited support from media houses and institutions.
Highlighting the findings of the report, DRF’s Executive Director, Nighat Dad, notes that “It is extremely hard for women in the media to move ahead in their careers due to the gendered harassment that they face both in the online and offline spheres. Women are often the subject of criticism in the field and they are usually judged on their looks and clothing as compared to the work they do.” She adds that, “The first step towards trying to eradicate this problem of online harassment of female journalists is acknowledging that due to the emergence and more usage of digital platforms for journalism, women are subjected to gendered harassment online, as opposed to their male counterparts”. 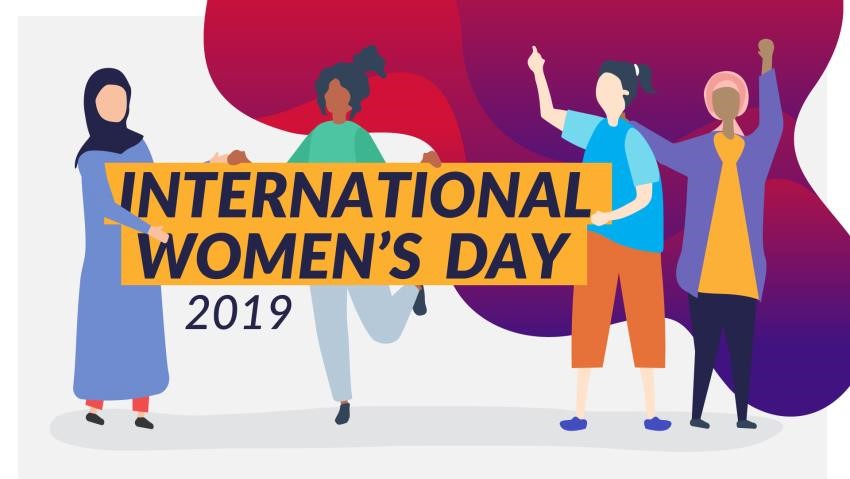 On this International Women’s Day, March 8th, DRF joined Free Press Unlimited and media professionals around the world to take part in Move4Women; a global movement to show solidarity and take action in support of women in the media. To celebrate the women in the media and highlight the importance of gender equality in the media, DRF’s friends and members of the Network of Women Journalists took pictures holding posters that had captions supporting the cause. The pictures were compiled in a video and were uploaded on DRF’s social media accounts. Today and every day, DRF and its friends strive for equality of women in the media. Click here to see the video.
Also, on International Women’s Day, some of the employees of DRF also took part in the Aurat March Lahore on an individual level. Hundreds of women, including members of DRF, took to the streets in Lahore to reclaim public spaces, celebrate the struggle and movement of Pakistani women and fight for their fundamental human rights.
Among other things, the women pushed for economic justice, implementation of labour rights, access to a fair justice system, reproductive justice, rights of religious minorities, promotion of an anti-war agenda and gender equality in political participation. The March was followed by overpowering performances by talented women.

On International Women’s Day, which is celebrated every year on 8th March, the Foreign Minister of Pakistan released a message acknowledging the efforts of women in Pakistan from all walks of life. The message states that despite the social and economic challenges, women of this country have carved destinies and have shaped the future of the globe and this very nation. Nighat Dad, the Executive Director of DRF, was also appreciated for her contributions to the society through her work at DRF.  Click here to read the full message.

DRF’s Executive Director, Nighat Dad, was featured in The Tempest’s list of ‘40 Women to Watch 2019’, which highlights extraordinary women and femmes making waves in their industries or passions of choice. Click here to view the article and have a look at other amazing women in the list. 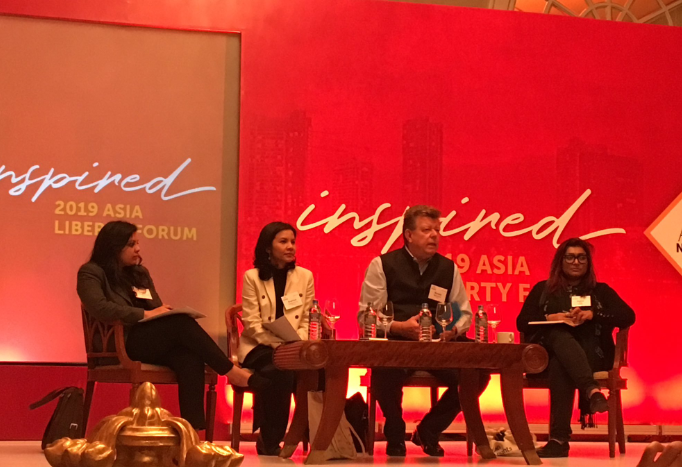 A two-day conference, Asia Liberty Forum (ALF) 2019, was held in Colombo, Sri Lanka on 28th Feb and 1st March. The Forum brought together friends of the freedom movement across Asia to discuss challenges faced by the region and to learn from one another how to most effectively advance free-market reforms. Nighat Dad attended the conference and was part of the panel discussion called ‘Challenges to Privacy in the Digital World’, where the panelists gave an overview of the legal and policy frameworks and discussed the challenges facing privacy advocacy.

Nighat Dad at Pakistan in the Digital Age conference, London 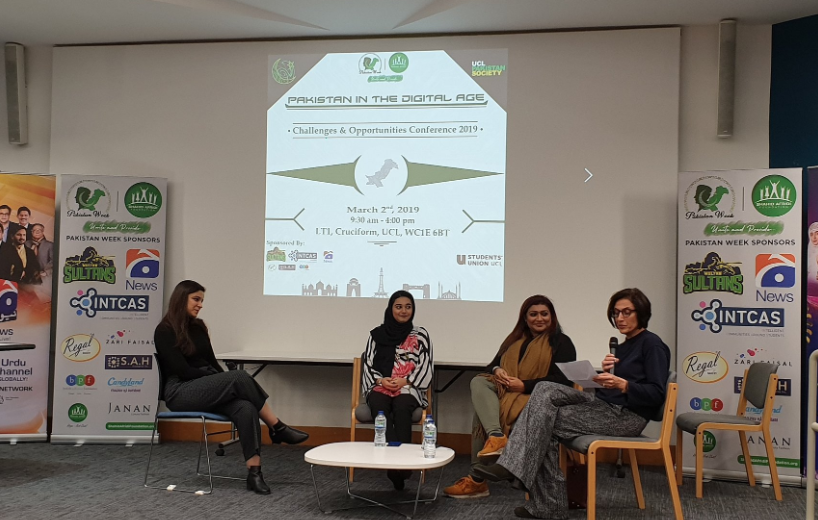 On March 2nd, Nighat Dad spoke at a conference held by University College London on Pakistan in the Digital Age. A very interesting discussion took place in the context of women in the digital age, governance & policy and the economic challenges and opportunities. Ms. Dad talked about her work as an activist and the challenges she faces in this field. She also explained how she started working on issues relating to digital rights and the formation of the Digital Rights Foundation. She mentioned that when she was practicing law, she started looking into policies and legislations and found that there was nothing addressing the issues of online violence and harassment, especially for marginalized groups. That is how she started advocating for rights of people online. Geo News covered the conference. Click here to view the video. 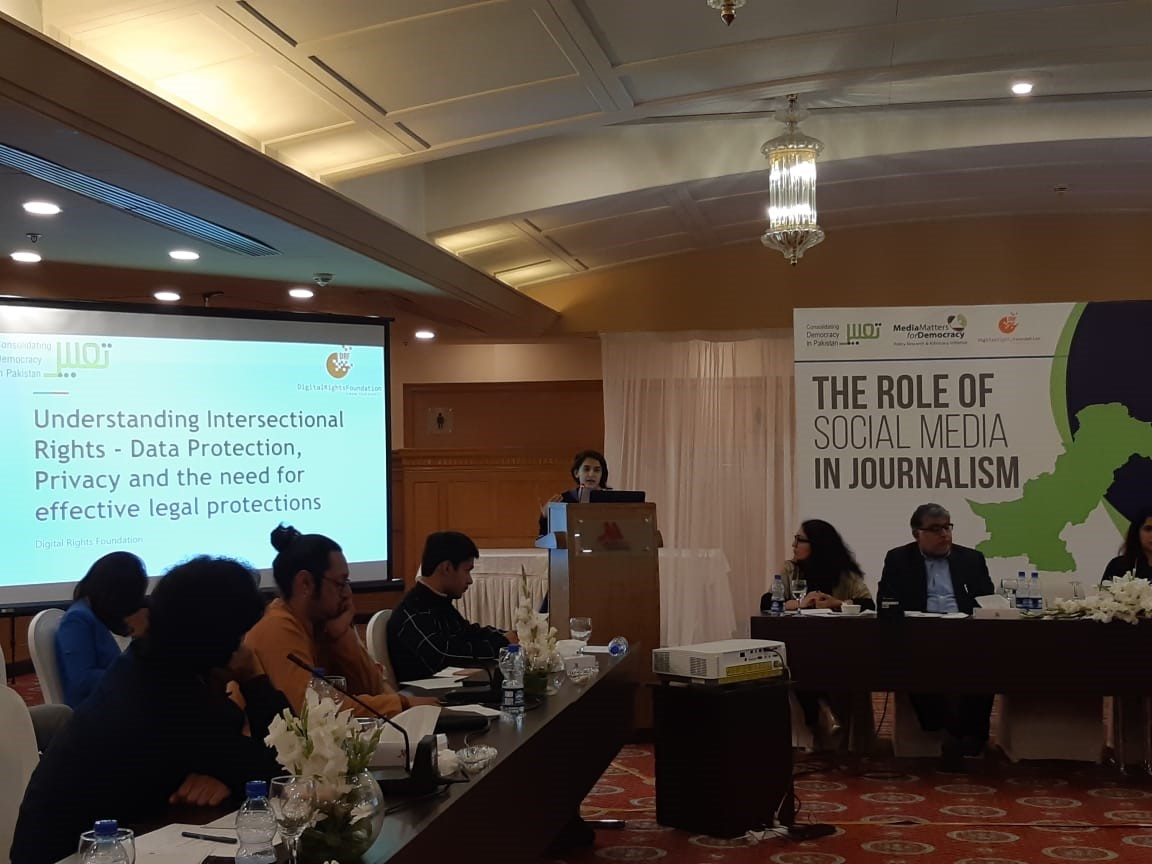 Digital Rights Foundation (DRF), Media Matters for Democracy (MMfD) and DAI-Tabeer partnered to organize a roundtable discussion on the role of regulation and policy-making in digital, titled “The Role of Social Media in Journalism”. The event was held on March 20, 2019 in Islamabad. The roundtable was attended by new social media platforms as well as traditional media platforms, along with civil society groups and members of academia. Policymakers, including representatives from the Pakistan Telecommunications Authority (PTA), national Senate and political parties also attended the session. The aim was to foster a multi-stakeholder dialogue and generate policy-driven discussions around issues of online content regulation, media law and data protection. 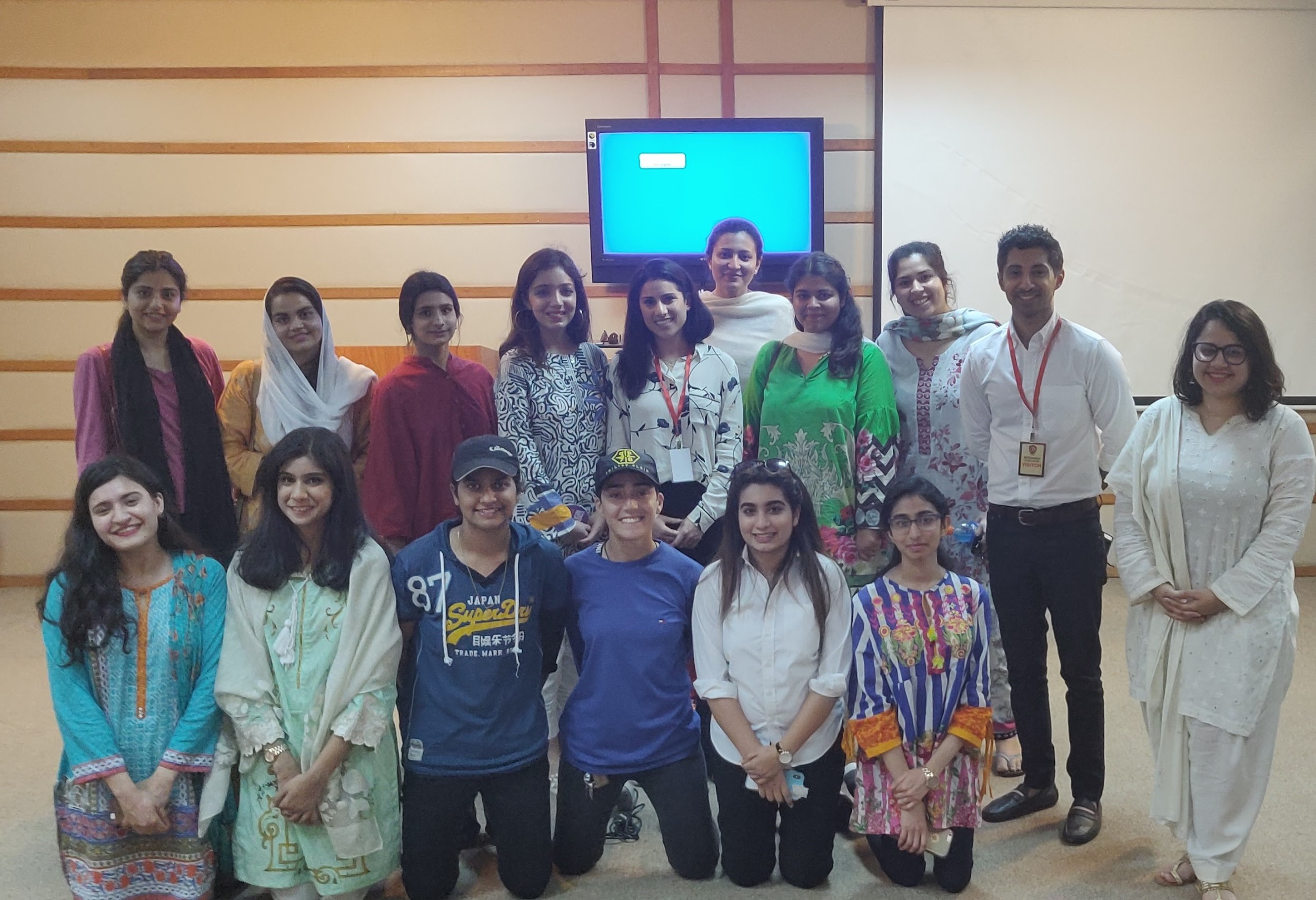 In collaboration with Google, DRF held a focus group discussion with students of Kinnaird College, on the gendered aspect of online hate speech and aggression and the effects that moral policing and cyber stalking have on the female presence online. 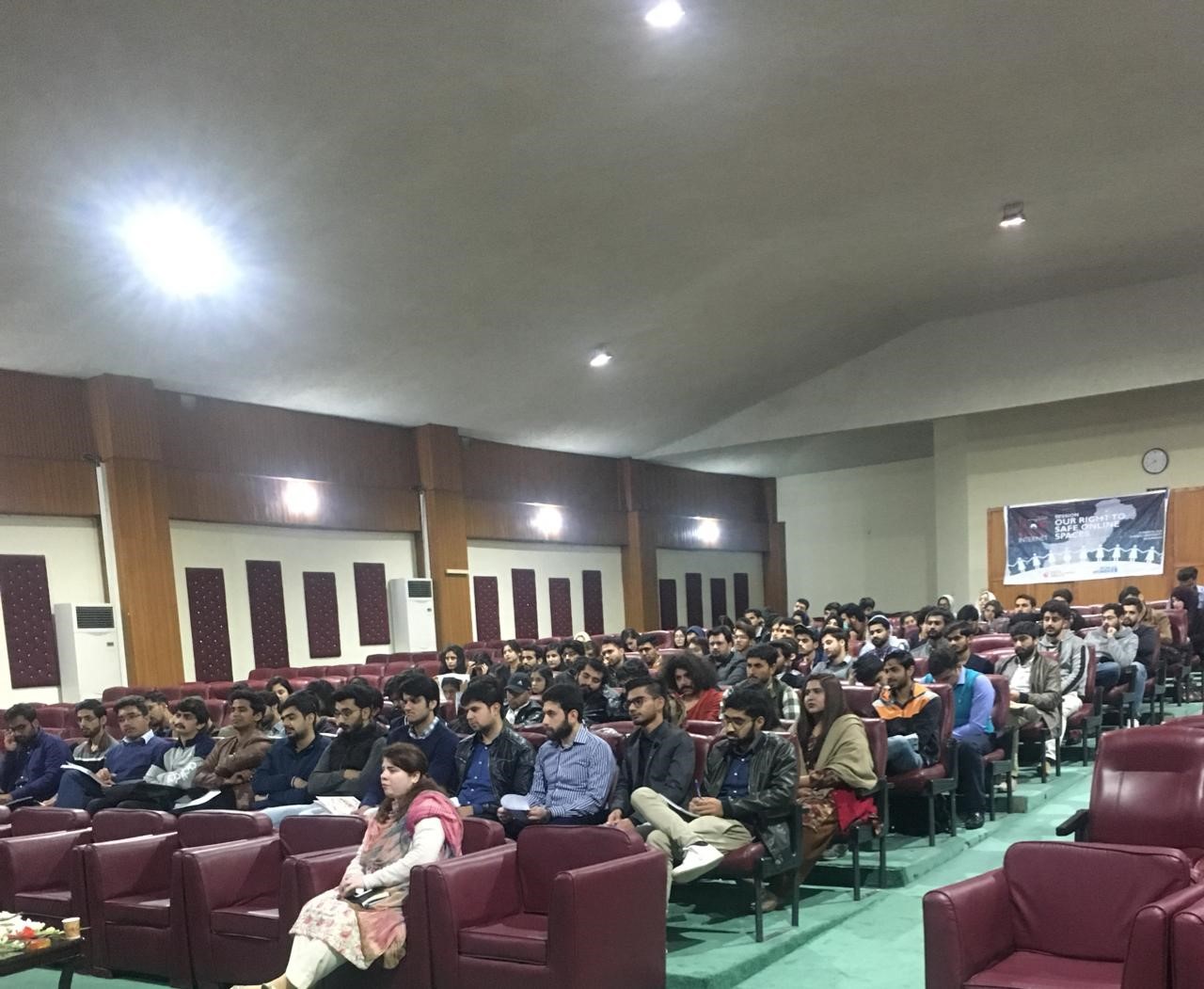 Digital Rights Foundation in partnership with UN women, conducted a session at Bahria University Islamabad. 95 undergraduate law students were in attendance. The discussion, which was kept as an interactive session, focused on harassment in general then streamlined into cyber harassment in specific, and a discussion of the prevalent laws and case laws.
The session was conducted by two trainers, one of whom was a lawyer and the other a clinical psychologist.

Session at Pakistan College of Law 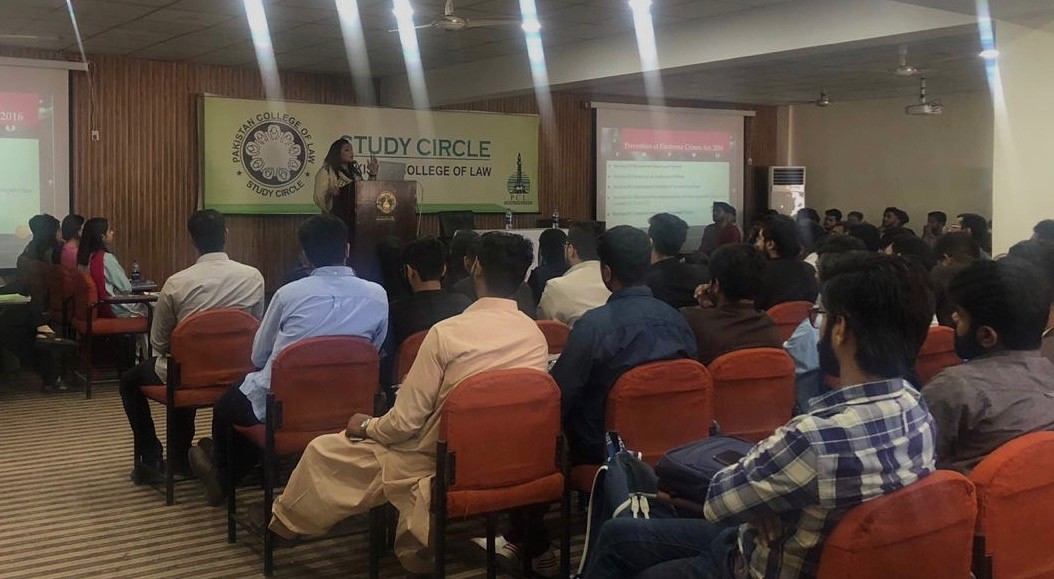 Our Executive Director, Nighat Dad, conducted a session at Pakistan College of Law. The presentation included an introduction to cybercrimes and digital rights in Pakistan, as well as a comprehensive discussion on the various issues faced by victims of cybercrimes seeking justice. Since the session was designed for law students, the focus was primarily on the legal and procedural aspects of the existing laws, and prospective amendments in the area of cyber regulation. The session was attended by at least 90 students and remained an interactive discussion throughout. 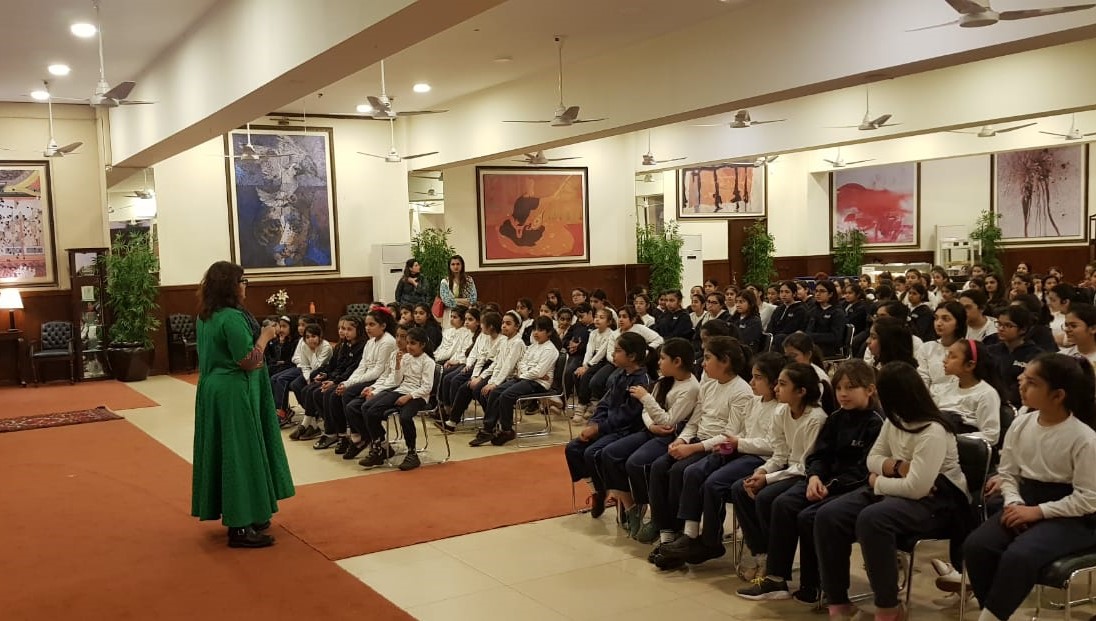 On March 22, DRF conducted a session at Lahore Grammar School, Phase 1 DHA branch on cyberbullying and digital rights. Representative of DRF, Ms. Jannat Fazal, talked about the rising cases of cyber harassment due to more usage of social media. She explained the students about digital rights and how they can take various measures to protect themselves in the online spaces. 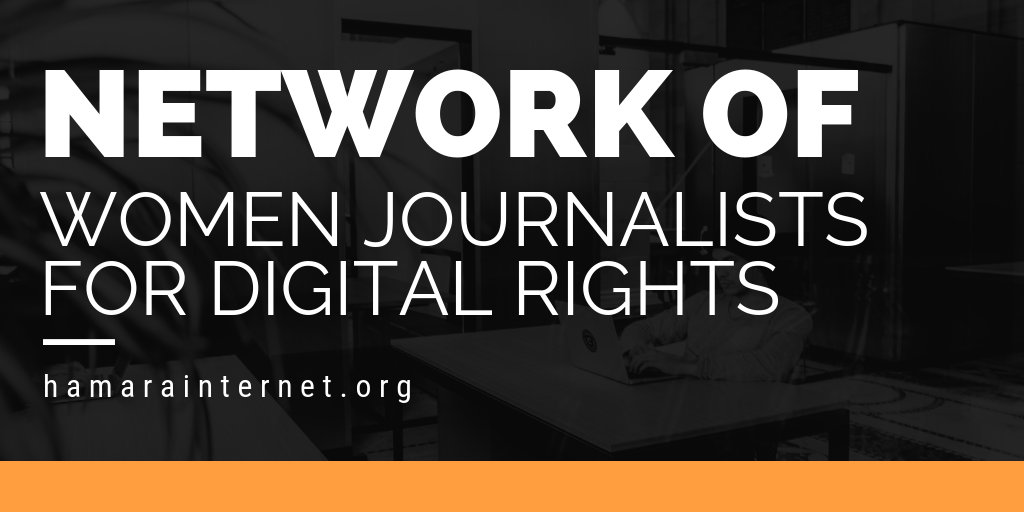