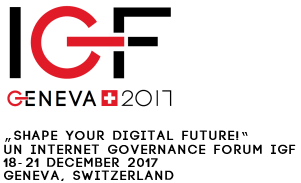 December 18, 2017 - Comments Off on Digital Rights Foundation is at the Twelfth Annual Internet Governance Forum, 2017

Digital Rights Foundation is at the Twelfth Annual Internet Governance Forum (IGF) happening in Geneva, Switzerland from 18th to 21st of December, 2017. The dynamic get-together of diverse stakeholders will discuss pressing public policy issues related to the digital world. It allows all participants to share their experiences and debate, as equals, the opportunities and challenges arising from the process of digitization.

Find Nighat Dad, the Executive Director of Digital Rights Foundation, at the IGF organising and speaking at some of the very interesting sessions which include,

Surveillance from the Margins

Surveillance is not a uniform experience, be it surveillance by the state, companies or social actors. The gendered nature of surveillance and the different forms it takes given the positionality of the person experiencing it is particularly glaring when experienced by members of a particular gender or a marginalised community. Sometimes surveillance is discriminatory per se, in that it is directed specifically at people because of their gender, race, class, disability, sexual orientation, etc. For instance, phishing attacks experienced human rights activists or offline and on-the- ground-surveillance of journalists covering controversial topics. In other instances, facially non-discriminatory surveillance is experienced differently by certain individuals
because of their marginality and positionality through the disparate impact that it has. It is the second form of surveillance that is often left undiscussed and the intersectionality of race, class, gender, religion, sexual orientation and ability is unexamined.

The purpose of this panel comprising of people from diverse backgrounds, is not only to map and understand the diversified experiences of surveillance but to take these findings regarding the diffused nature of surveillance and work towards actively finding solutions to the particular kinds of surveillance experienced by marginalised groups. The aim of the discussion will also be mainstream discourse from the margins at a global level.

The impact of digitisation on politics, public trust, and democracy

The digital space, as a cornerstone of the public policy space, can be a great enabler for democratic discourse and participation, as well as inclusive policy-making. At the same time, the misuse of the digital public policy space can lead to the distortion of truth, mistrust in public information, and misrepresentation of public opinion.

This session will discuss both the opportunities and the challenges that digitisation brings to the digital political sphere, the public trust, and democracy. Discussions will revolve around ways of strengthening the benefits of democratic participation and inclusion via digital means, limiting the negative impact of the misuse of the public policy space, and rebuilding trust among online users.

The session will also address the roles and responsibilities of different stakeholders. It will look at issues such as government policies aimed at creating more inclusive policy-making processes through the use of digital tools, the responsibility of Internet intermediaries for the dissemination of fake news and false news that can influence political processes, and the elements that can help rebuild trust among users. Also, the session will discuss the role of media actors in a democracy and the implications of the ongoing structural change in the media ecosystem. Most importantly, the session will look into whether and how digital literacy, education, and awareness-raising could be the key towards empowering citizens not only to take advantage of digital tools, but also to deal with the challenges related to the misuse of the digital public space.

‘Good stories’, ‘bad stories’, and lessons learnt will be explored as part of the discussions.

This is a multi-sector panel discussion about strategies for understanding and combating online violence against politically-active women. Online harassment of politically-active women is one form of the global problem of violence against women in politics (VAW-P), and can result in women choosing not to participate in leadership or political debates, and ultimately not to express their opinion. The resulting limitation of both the number of women able to participate and the range of issues discussed poses a fundamental challenge to democracy, progress towards gender equality and women’s empowerment, as well as to the integrity of the information space.

The panel will engage experts from multiple sectors including digital activism, women's empowerment, technology, and international governance, to discuss methods for building international understanding of this issue and identifying strategies for combating it.