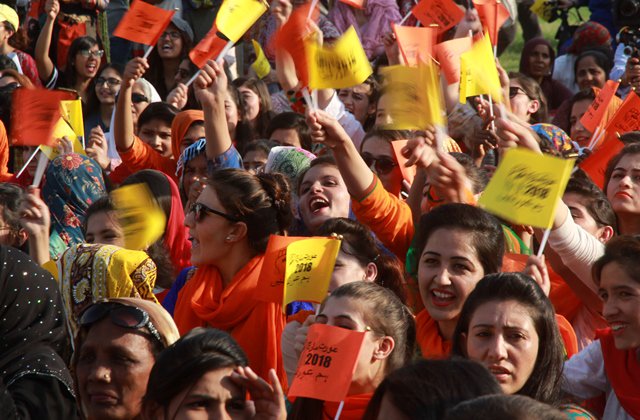 March 22, 2018 - Comments Off on Aurat March backlash and the Continuum of misogyny from the street to Facebook Pages

The Aurat March was held on March 8, 2018 to mark International Women’s Day. The March was held in Lahore, Karachi and Islamabad. It was organized and attended by a collective of activists, organisations and groups to celebrate the feminist movement, while at the same time highlighting the oppressive patriarchal structures that allow for marginalisation of women. It was unfortunate however that in the aftermath the March itself turned into an example of how women’s voices are stifled, ridiculed and dismissed when they try to raise their concerns. The reactions to the March, particularly some posters displayed in the procession, have exemplified the daily offline and online harassment that women face.

We, at the Cyber Harassment Helpline, have seen a lot of cases of misogyny and gendered harassment of women in online spaces. However, after the deluge of complaints immediately in wake and directly related to the Aurat March, we saw a different kind of harassment take hold of online spaces.

Several pages have been identified to us by complainants that have engaged in a concerted campaign to target those who attended the Aurat March, especially the women photographed with signs and posters. Particularly two posters have attracted the ire of people on the internet-- “khud khana garam kar lo!” (“Re-heat the food yourself”) and “Mera Jism, Meri Marzi” (“My body, my choice”). Not only have the women holding these posters directly been targeted, the images have been used to target the organisers of the march and the Pakistani feminist movement in general. Women have been receiving death and rape threats, with their faces broadcast on social media.

The unfortunate incidents lay bare some uncomfortable truths about Pakistan and the level of misogyny that pervades our systems and everyday lives. It also highlights the risks activists and outspoken rights advocates face given the ubiquitous nature of digital technologies. The boundaries regarding consent in public spaces have always been misunderstood, and this takes on a more complicated shape in online spaces.

The continuum between online and offline spaces is highlighted by the backlash to the Aurat March. While the March took place in an offline public space, the backlash found expression mostly in online spaces. Posts have appeared revealing personal details of the protestors (a phenomenon known as “doxing”), ridiculing them and threatening them with gendered violence. These responses are specifically geared towards silencing voices of women. The Aurat March was the first public procession for a lot of women, thus targeting them is akin to pushing them out of these spaces and creates an additional burden for women who want to raise rights issues through peaceful protest which is a fundamental and constitutional right of every citizen.

The Aurat March 2018 was part of a continued struggle by women for a more equal, just and inclusive society. Earlier feminist movements in Pakistan have faced backlash from different groups, especially beneficiaries of patriarchal structures, however this instance highlights that that online spaces can be weaponized to target and silence activists, women and minorities in new and dangerous ways.

If you or anyone you know is being targeted online for their opinions, views and stances, please reach to us at the Cyber Harassment Helpline through our toll-free number (0800-39393) and email address ([email protected]). We will help with speedy content removal and legal advice. Don’t let your voice be silenced, there is support out there.