All Posts in violence against women

Women and girls, in every corner of the world, are struggling for their rights or for the rights of the communities they live in. Women Human Rights Defenders across the world are not only discriminated against because of their line of work but also due to their gender. They defend the rights of every human being including women’s rights and the rights related to gender and sexuality and the work they do often puts their physical and cyber safety at risk.

29th November marks the International Women Human Rights Defenders (WHRDs) Day, which is celebrated across the world to honor the courage and resilience women human rights defenders have. WHRDs are comparatively higher at risk than their male counterparts because of the restrictions imposed on them by society due to their gender. They are often labelled as ‘immoral’ women without familial values and morals, and are subjected to reputational damage.

WHRDs working on specific women issues like sexual and reproductive health rights face greater hostility. They are considered to be the ones who bring disgrace to the family due to their sensitive line of work. It is essential that WHRDs get protection and support from their peers, families and the state.

Online and offline spaces are correlated and the consequences individuals face in online spaces can also lead to repercussions in offline spaces which is why it is essential to know what the law is. Other than the challenges and risks from their communities, WHRDs are also vulnerable in digital spaces. They are harassed, exploited and blackmailed through different online platforms especially with the evolution of social media. The Prevention of Electronic Crimes Act (PECA) was passed in 2016 which focused on online violence. The law was specifically introduced to protect women in online spaces. Any activity in which individuals are intimidated and blackmailed through computer technology and social networking sites would constitute as cyber harassment. The cybercrime law clearly states that using someone’s name, ID and pictures without consent can potentially lead to 3 years of imprisonment or five million fine.

It is important for WHRD’s to have awareness of strong digital security measures and privacy tools on their devices and laptops. Despite the sensitivity of the work they do, some WHRDs tremendously lack online safety awareness, so much that some WHRDs do not know about the ways of securing their email accounts. Digital Rights Foundation is an organisation which works closely with WHRDs to raise awareness of the tools and measures that they can employ to work efficiently and securely, in both online and offline spaces. During one such workshop, I learnt that passwords must be a mix of of alphanumeric characters and symbols. I also learned that that sharing passwords via applications and platforms that are not encrypted is not safe and that one should avoid sharing personal photos, contacts and their daily routine schedule with any new contacts that one adds.

In case you encounter cyber harassment you can get in touch with DRF’s cyber harassment helpline 0800-39393 which is a toll free number. The helpline provides three basic services which are digital security assistance, psychological help and legal aid. The helpline functions from Monday till Sunday, 9:00 am till 5:30 pm. You can also reach out to the helpline on helpdesk@digitalrightsfoundation.pk . 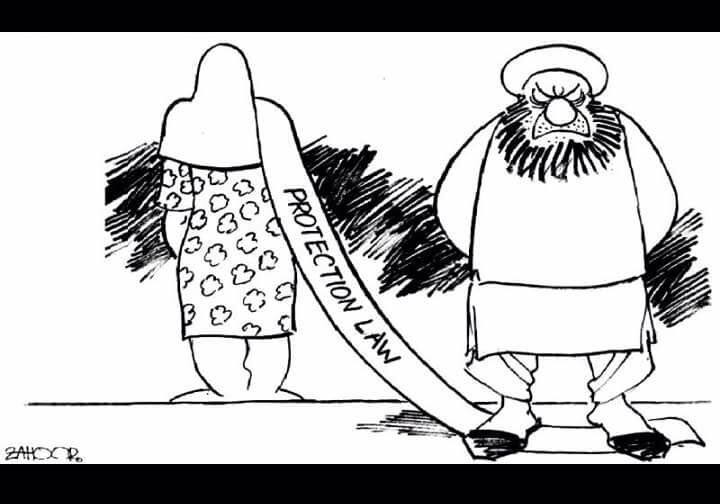 “Why is security for women a threat to many?”

Long before activists and organizations could begin scrutinizing Punjab’s Women’s Protection Act, they found themselves instead having to fight for its very right to exist.

The law, which essentially helps protect women from abuse in domestic scenarios, has been collectively spoken against by almost all the religious parties that are part of our social fabric. Numbering at a staggering 35, the parties - the leadership for which is unsurprisingly and predominantly made up of men - have termed the legislation un-Islamic and said that it would result in the collapse of the family system in Pakistan.

Despite the fact that the law is only provincial in stature, it has resulted in a backlash that has extended itself to the entire country. At present, the chaos just may extend itself to the Khyber Pakhtunkhwa bill which is currently being worked on.

The religious groups, in a joint statement said that the law would make matters worse for women instead of helping them:

“This controversial law to protect women was put into operation to accomplish the West’s agenda to destroy the family system in Pakistan,” it read.

The main question that we must ask is how a law that is meant to help women remain safe from domestic, psychological and sexual violence will result in the collapse of the family system in the country. The opponents of the Act, which consist of not just the religious parties but also regular people, fail to mention how allowing a woman space for safety in her own home can lead to the destruction of her family.

If this law will be in action, after sometime, there will be 25 Heera Mandis, &women will be on sale at 75% dicount,so Don't #SupportTheBill

There is no voilence against women from Men ! This violence is generated from women for other women, Men are only catalysts #SupportTheBill

Jamiat Ulema-e-Islami leader Maulana Fazlur Rehman himself has attacked the law and said that it would make men insecure and turn Pakistan into a western colony again. This begs the question: is a Pakistani man only as secure in his marriage, as his chappal on his wife’s face? Can he not build a relationship through love and respect? What many are effectively doing is opposing the rights that are being allotted to women to secure their own bodies against harm that comes from the people closest to them. By saying that the law will lead to the collapse of the family structure in Pakistan, what the religious right is really saying is that a family cannot exist unless a man has the right to abuse his wife in numerous ways.

And what the religious right is at present engaging in nothing short of extortion. The “give us what we want or we revolt” tactic is akin to blackmail. The reason for this is simple: the law was not imposed on the people of Punjab, it was passed through due democratic process. It cannot and should not be undone over the whims of a few. With this we also need to revisit our own mentality as a nation. Why is it that anytime violence is committed against women there is deafening silence, but when efforts are made for the betterment of women there is great outcry. The assertion that all pro-women efforts are western agendas is the very reason that Pakistan is seen as a backward country. The very religion that is being used to call the Violence Against Women Act un-Islamic has several provisions that require the protection and care of women - do we now see those too as western?

We must return the right of safety and security to women. They deserve to have control over their lives and exist without fear. They too deserve to feel free and avoid both physical and mental abuse.

Protecting women from domestic violence keeps families together in a more ethical & peaceful way. It's Islamic and humane. #SupportTheBill

It gives women protection against wrongful eviction from their homes pic.twitter.com/5wX0ZX8CeY

#SupportTheBill because the Quran tells you to treat women with courtesy "consort with them in kindness" (4:19)

What threatens the Pakistani family structure is not a tool for protection but the very mindset that is opposing it. Instead of encouraging the Act and investing efforts into stronger marriages that are based on love and respect, the religious right is saying that tactics of fear and intimidation are wonderful substitutes.

And that is not something any of us should stand for.
- Image credit: Dawn.com