November 2021 Newsletter: DRF Hosts its 8th National Privacy Conference in Islamabad on the 24th of November, 2021. 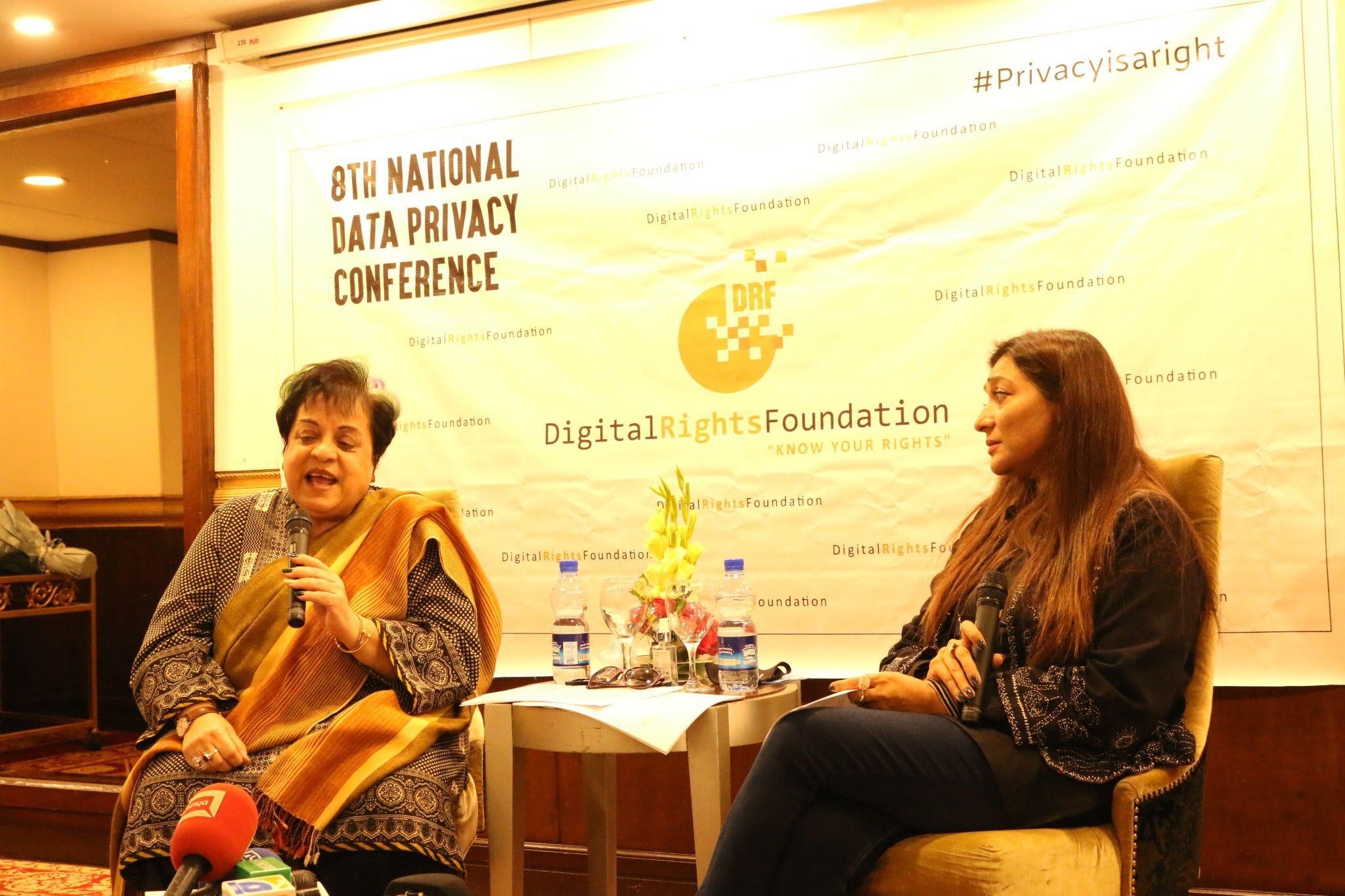 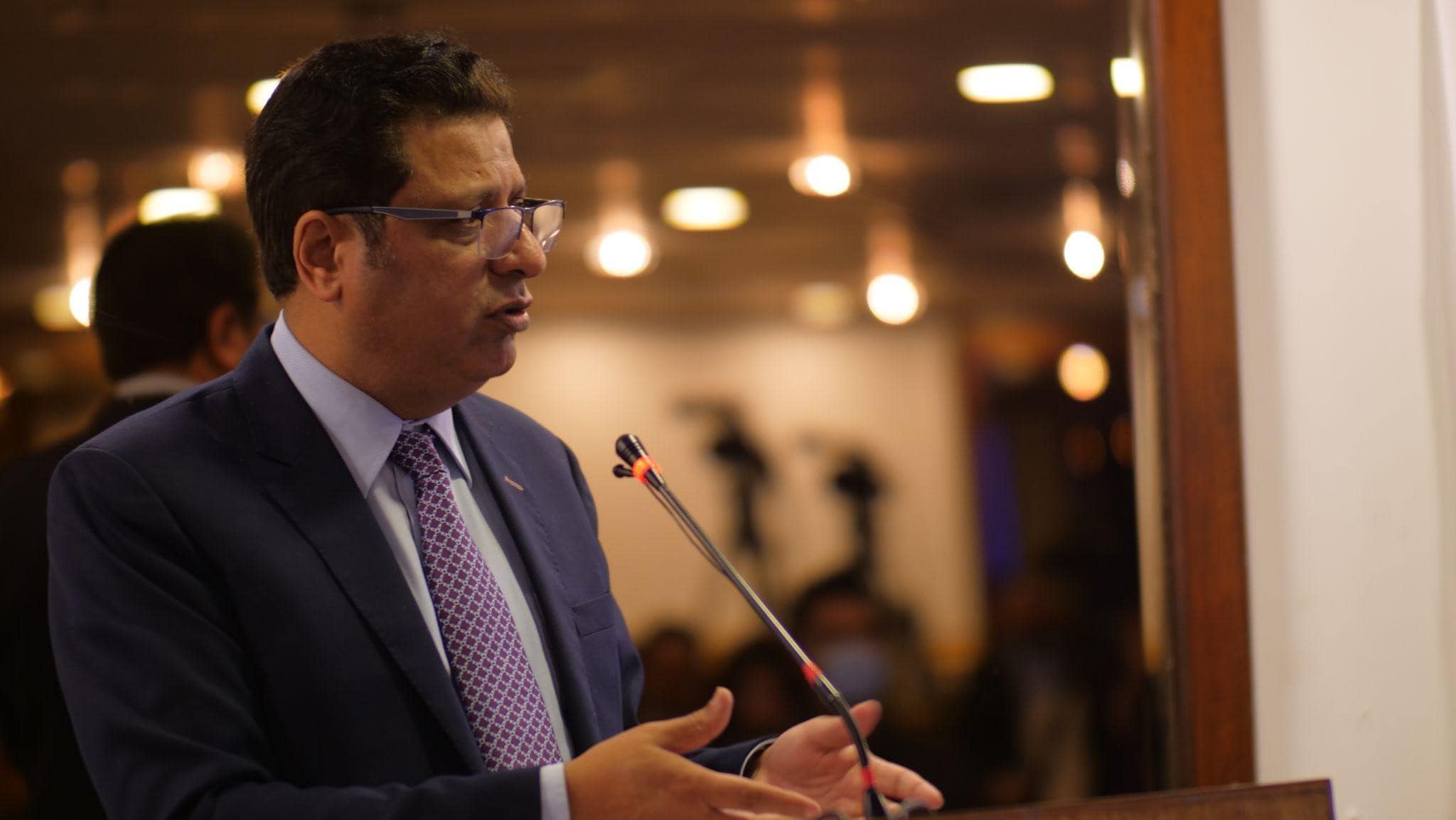 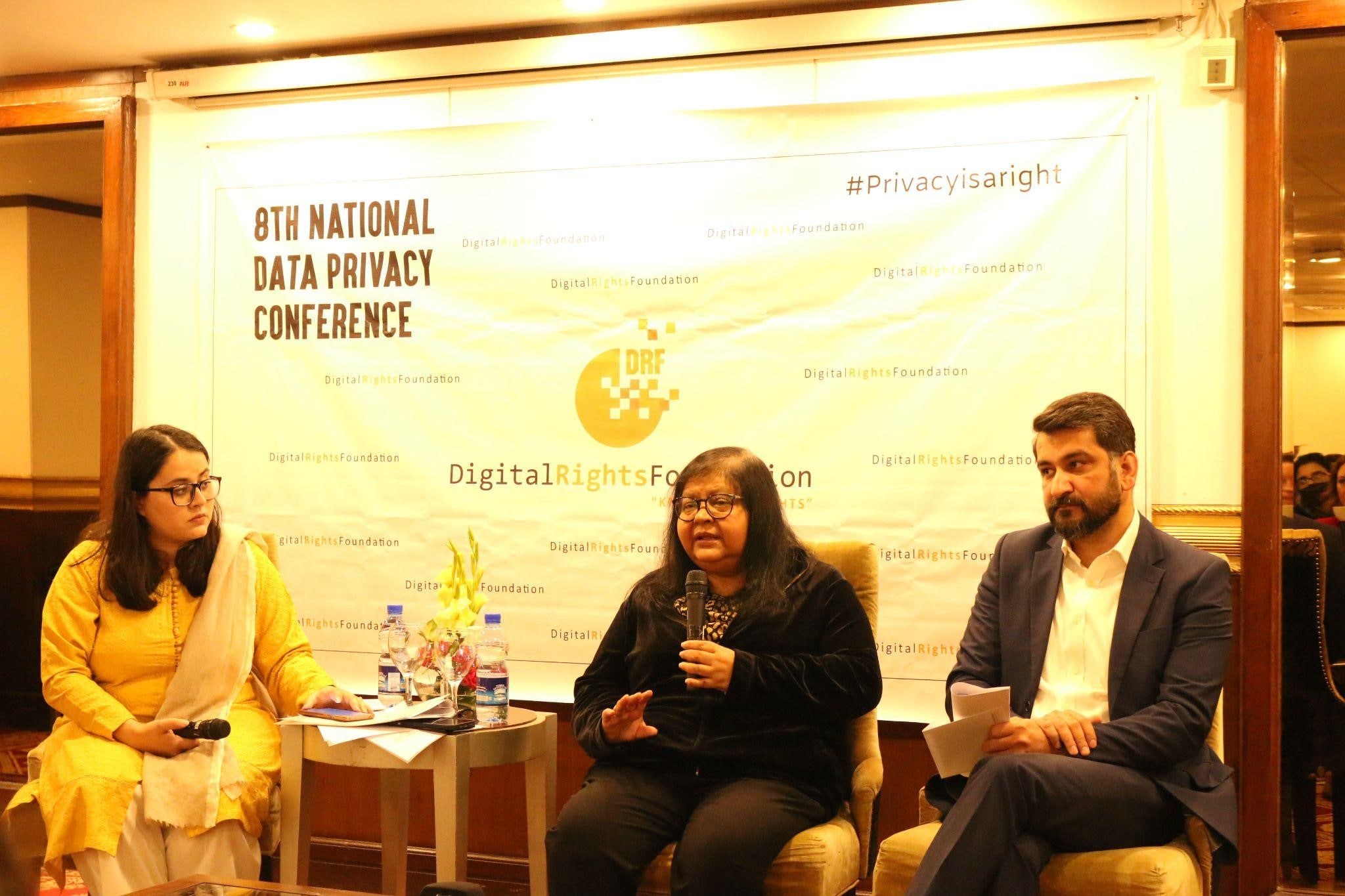 Digital Rights Foundation conducted it’s 8th annual National Data Privacy Conference on Wednesday the 24th of November, 2021 at Marriott Hotel Islamabad. The conference brought together experts from various sectors which included the Ministry of Human Rights, Ministry of IT and Telecommunication, NADRA and other relevant stakeholders.

The event started off with a keynote address from the Executive Director of DRF Nighat Dad, who stated that “the right to privacy is a fundamental right, however what that means in the digital age requires a detailed and nuanced discussion that includes all stakeholders--the state, businesses, civil society, and ordinary citizens.”

The first panel titled, “How Private is the Digital ID in Pakistan” featured Tariq Malik, Chairperson NADRA. Mr. Malik highlighted the importance of a data protection law in Pakistan to ensure standardization of data privacy practices as an important part of the “social contract between citizens and the government”.

“Drafting the Data Protection Legislation: Progress and Next Step”’ was the second panel of the day, including Bilal Abassi, Director IT of the Ministry of IT and Technology and Jehan Ara, Founder and CEO of Katalyst Labs. Ms. Jahan Ara highlighted that “a strong personal data protection law needs to apply both to the public and private sector because public bodies hold large amounts of data on citizens.”

The final panel, “Privacy from a Human Rights Perspective”, was split into two parts; the first half with DRF Executive Director Nighat Dad in conversation with Human Rights Minister Shireen Mazari. Minister Mazari stated that the “right to privacy is a fundamental human right, but the right needs to be balanced with other competing rights.” She went on to highlight that “privacy is even more important for women, just look at the Noor Muqadam case mainstream media aired footage that caused so much distress for her family. The second half of the panel had Usama Khilji, Director at Bolo Bhi. Mr. Khilji stressed the importance of a strong commission for privacy: “We need a privacy commission that is independent of the proposed privacy commission that is separate from the government that can hold the state and powerful actors accountable.”

The annual Conference is a banner event for the Digital Rights Foundation and this year’s event drew in as substantial and informed an audience and guest panel as ever and was covered extensively by local media.

DRF held a workshop with journalists on Gender Sensitive Reporting in Mainstream Media & Digital Journalism on 3rd November. The workshop had journalists from across Pakistan who discussed why gender sensitivity is important in the media and what can be done to make it better. 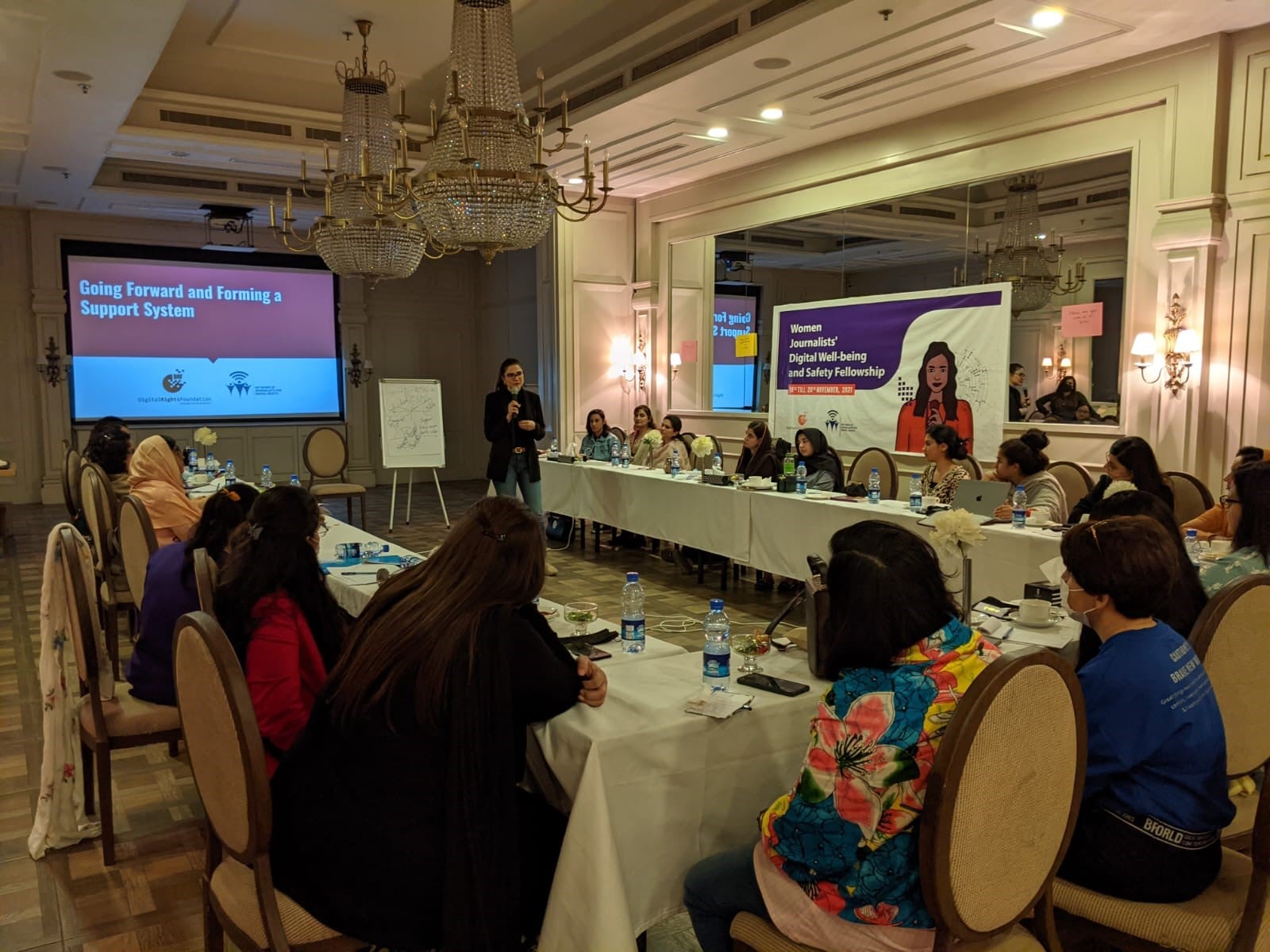 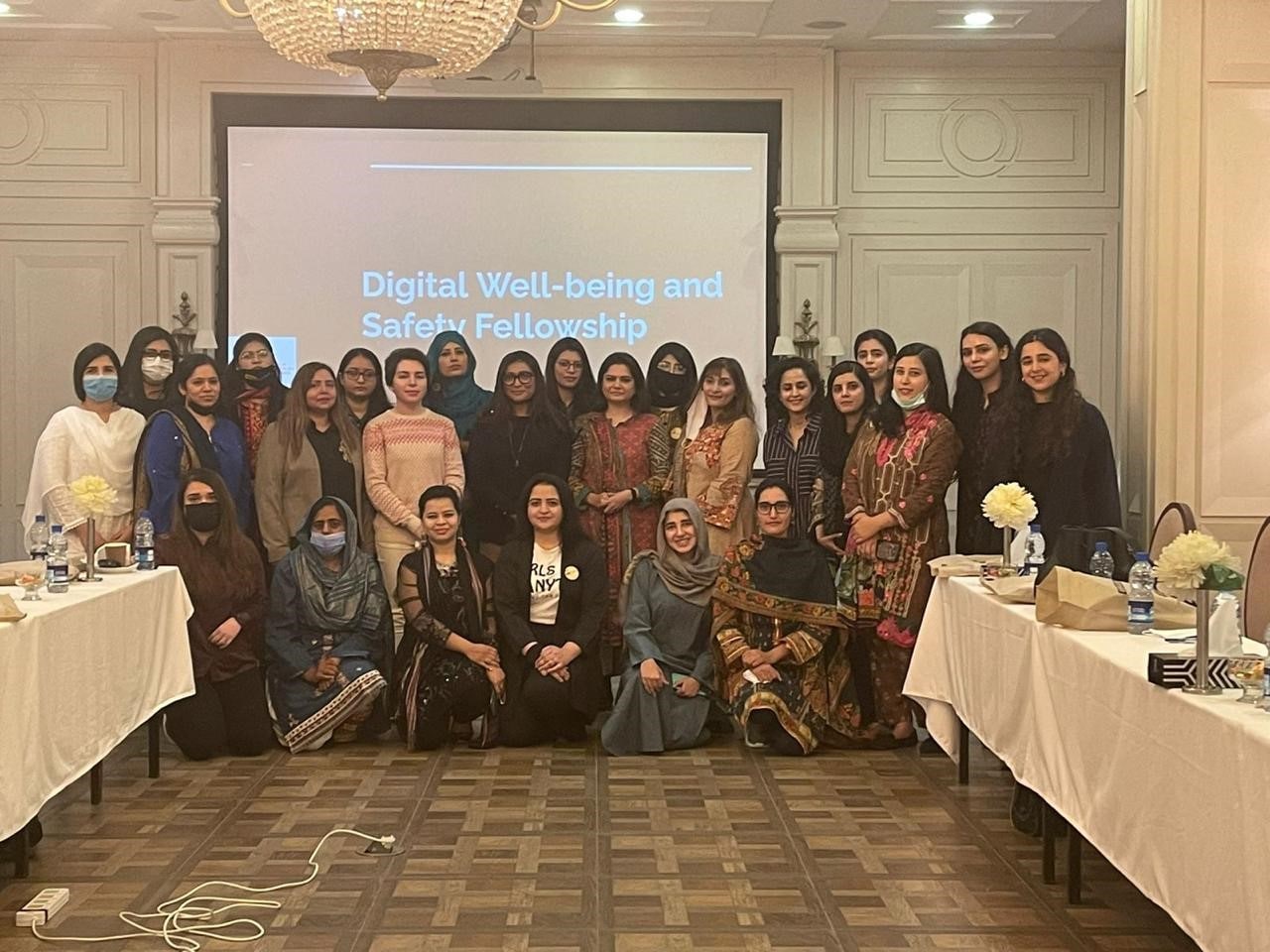 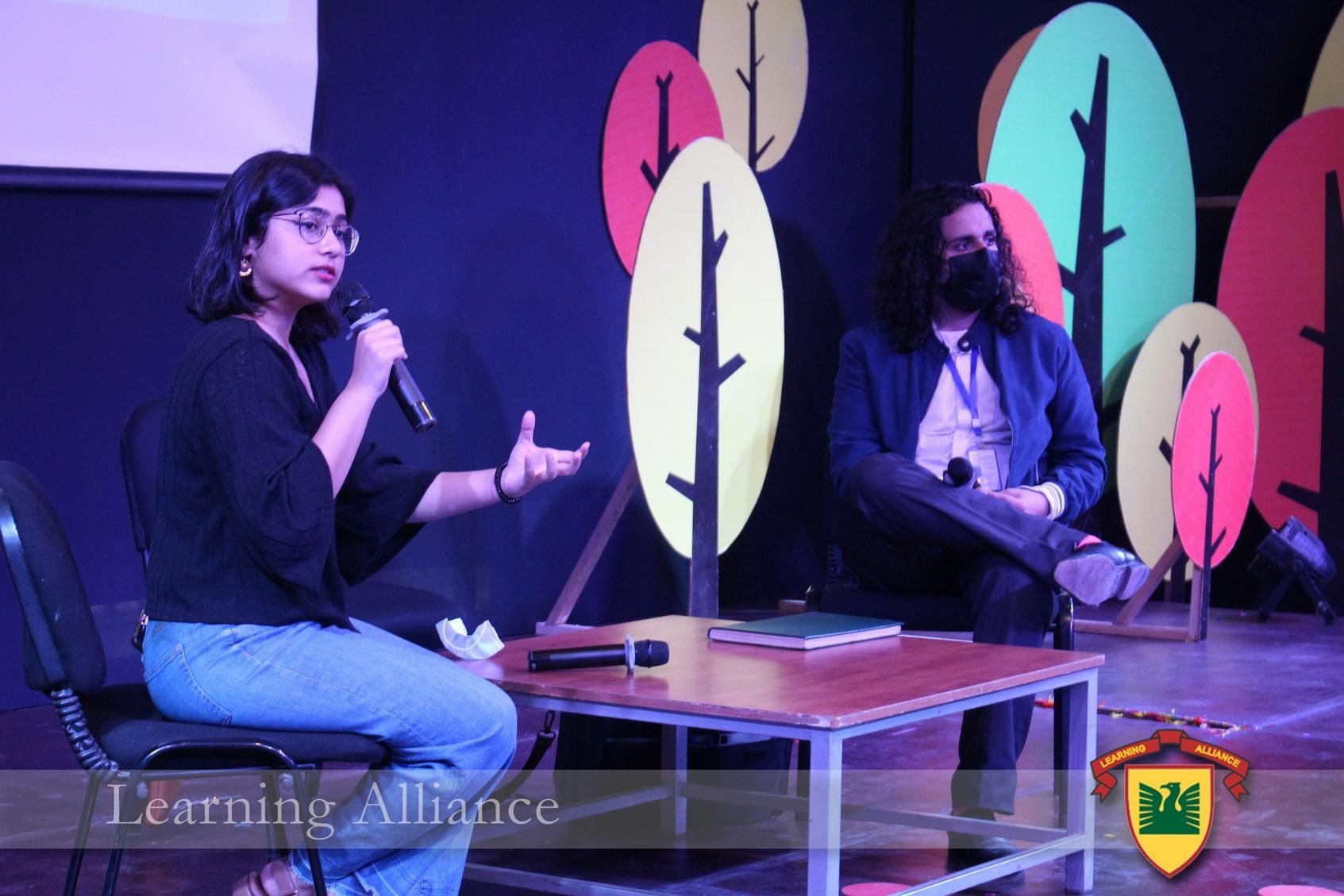 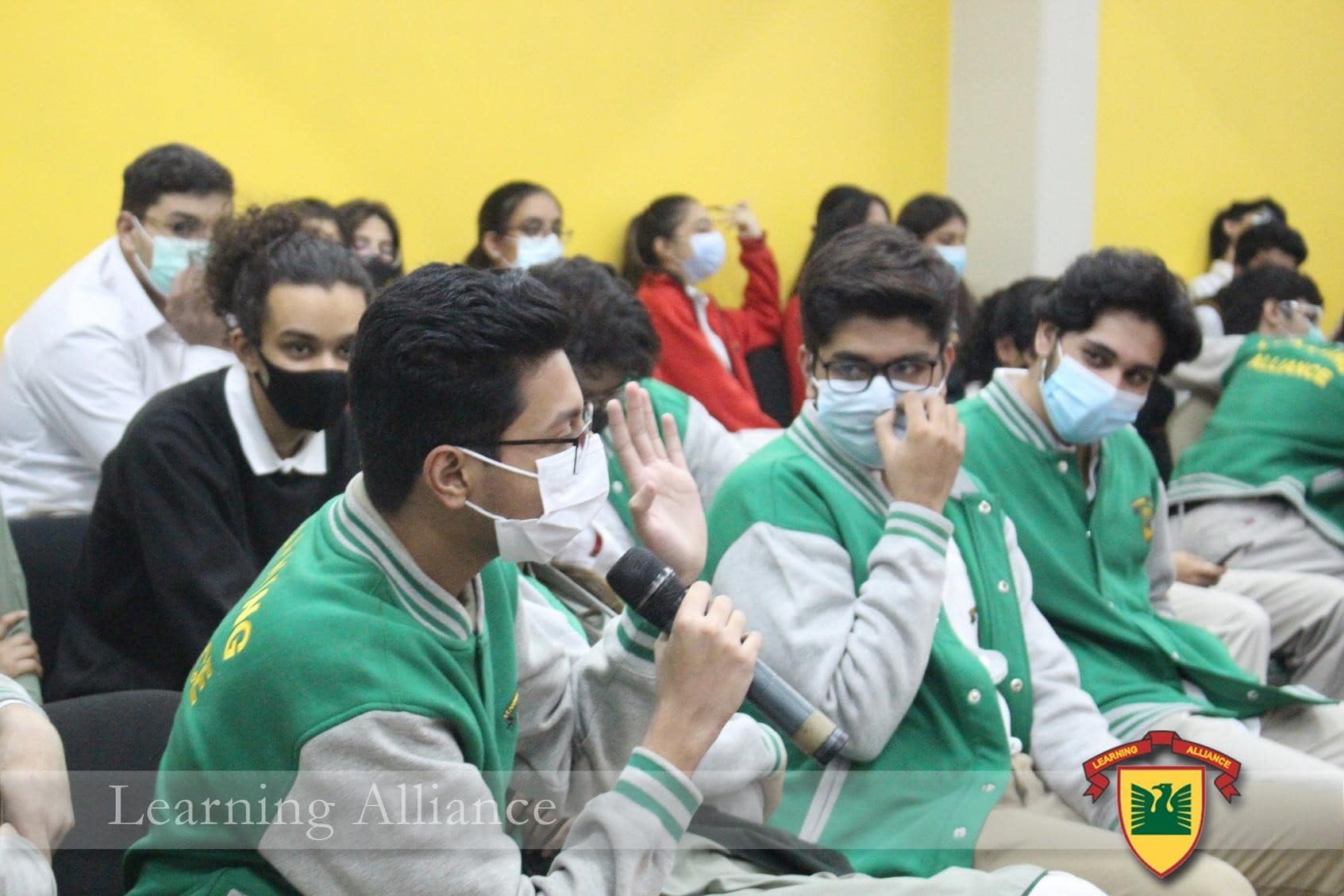 DRF conducted two sessions at Learning Alliance this month. The first was a panel discussion on ‘Navigating Online Spaces’ geared towards O and A Level students, where Hyra Basit represented DRF on the panel along with Wafa Asher, ex-President of FemSoc at LUMS. The second session was held on ‘Safe Online Surfing’ with students from Grades 6-8 and was more interactive.

Executive Director Nighat Dad was invited by the Child and Women Abuse Studies Unit (CWASU) on 5th November to speak at the #JoiningTheDots webinar on cyberspace and new technologies. She was called the 'digital warrior battling the patriarchy' at the event. 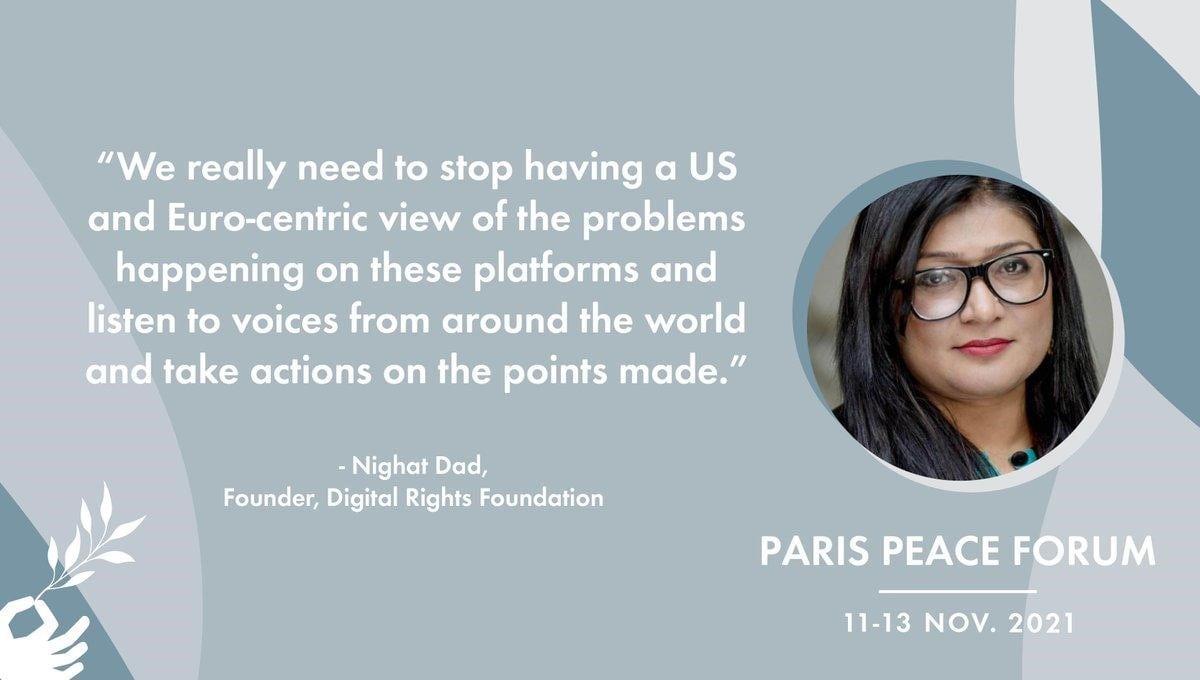 Nighat Dad spoke on the virtual  panel titled “Curbing harmful content: Social media for peace” at the Paris Peace Forum on 12th November. She spoke of the need for policy makers to take local contexts into account when regulating social media in different regions. 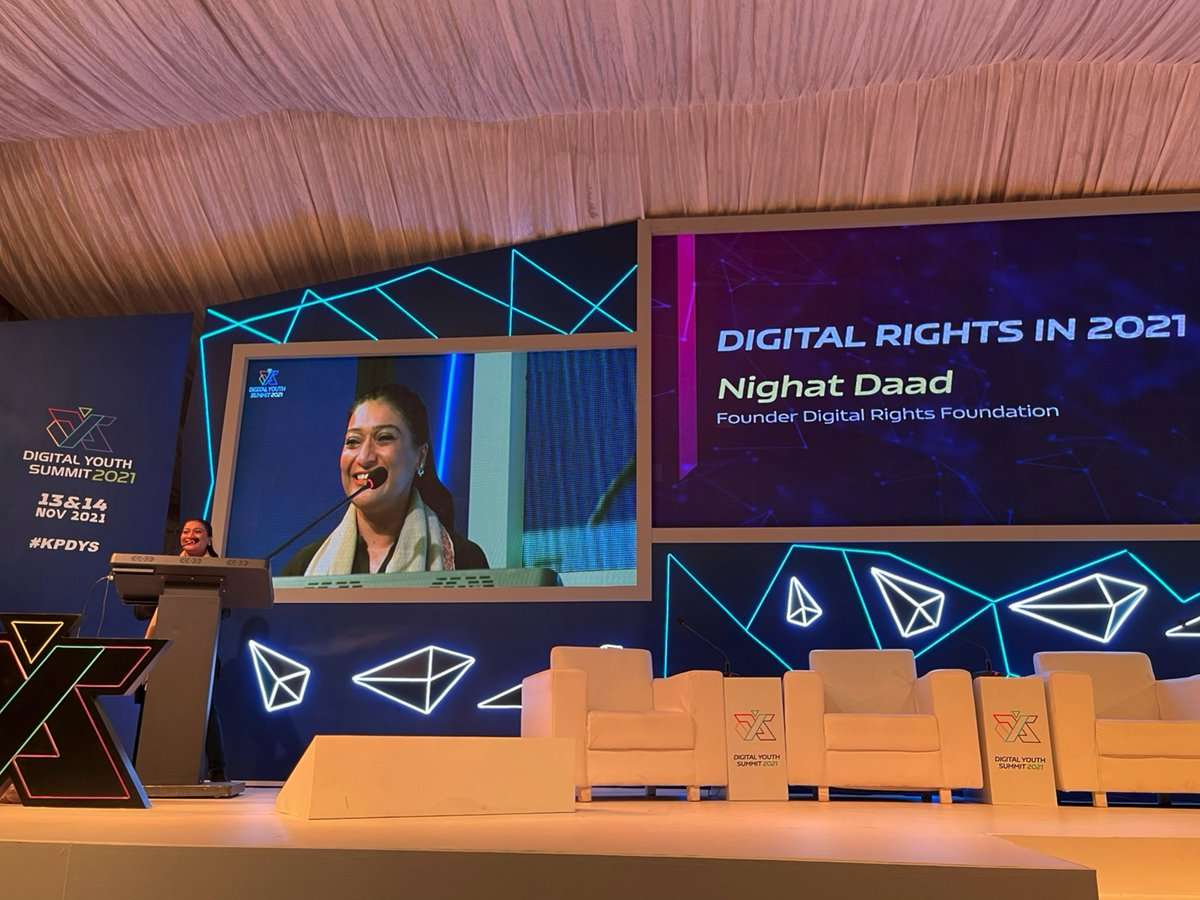 Nighat spoke at KPK’s Digital Youth Summit 2021 on the 13th and 14th of November about Digital Rights and Digital Citizenship, along with  Misinformation, Cyber Harassment and the need for Data Protection Laws which adequately safeguard the privacy of  users online. Our Director for Policy and Research was also a speaker at the KPDYS’21 Summit and spoke about Misinformation in the Digital Age. 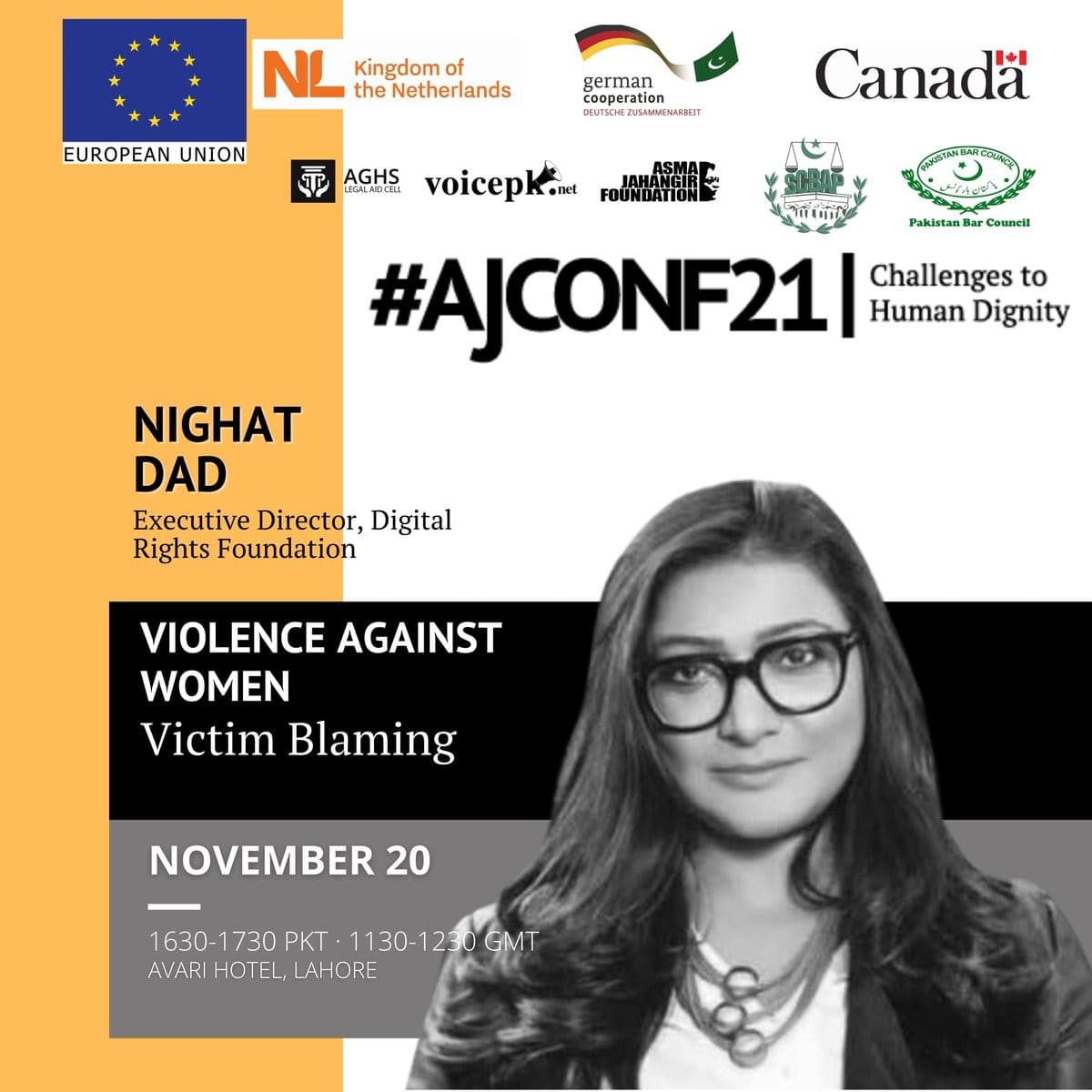 Nighat Dad was invited to AJCON21 on 20th November as a speaker to speak on the panel, “ Challenges to Human Dignity: Victim Blaming” in which she spoke about how provisions in the law have been weaponized to silence vulnerable victims, including human rights defenders and journalists. 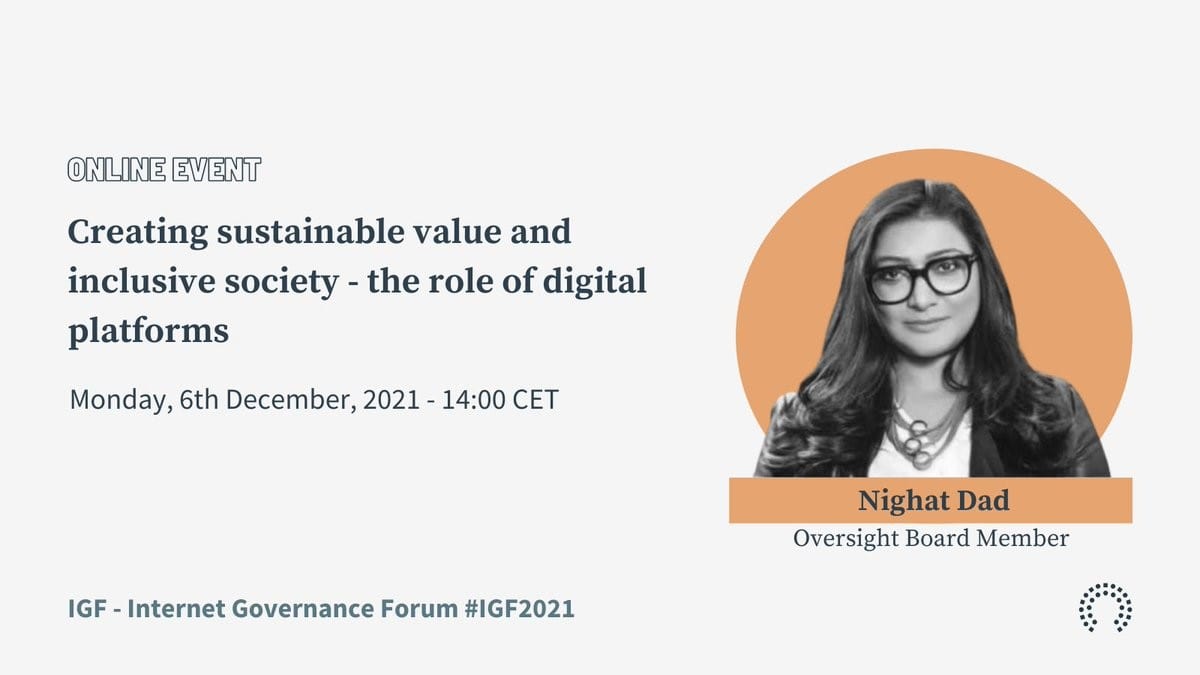 Nighat Dad spoke at the panel  “Creating sustainable value and inclusive society -  the role of digital platforms” at #IGF21 in which she discussed the various ways in which collaboration can be used in new governance models that are human-centric and inclusive. 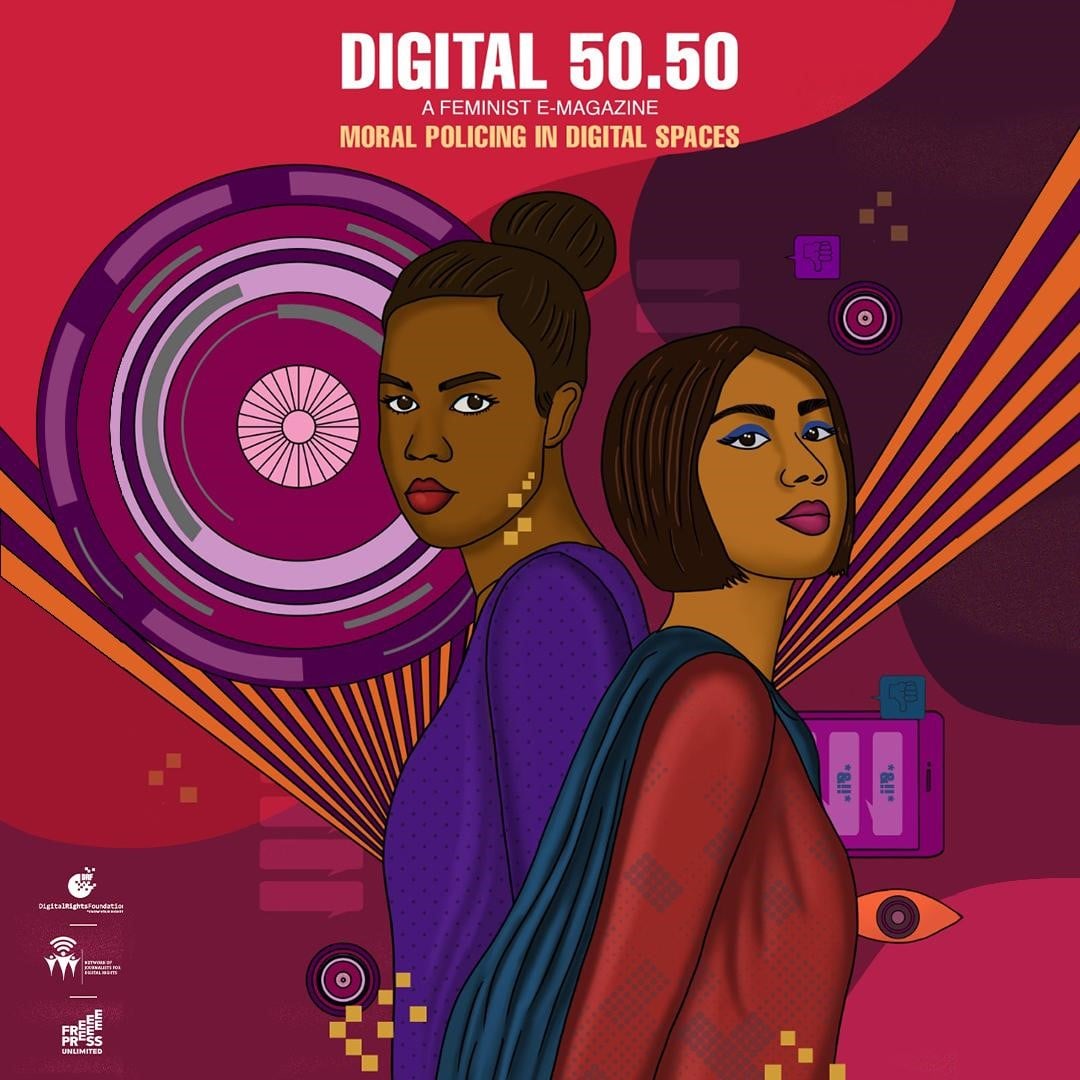 DRF launched new editions of its Digital 50.50 e-magazine and report on the theme of “Moral Policing in Digital Spaces” in Pakistan. DRF conducted research on the issue of moral policing and received stories from various women regarding their experiences with moral policing and its implications. A campaign was launched on social media regarding the various perspectives of women experiencing moral policing which were reflected in their pieces for the Digital 50.50 e-magazine. 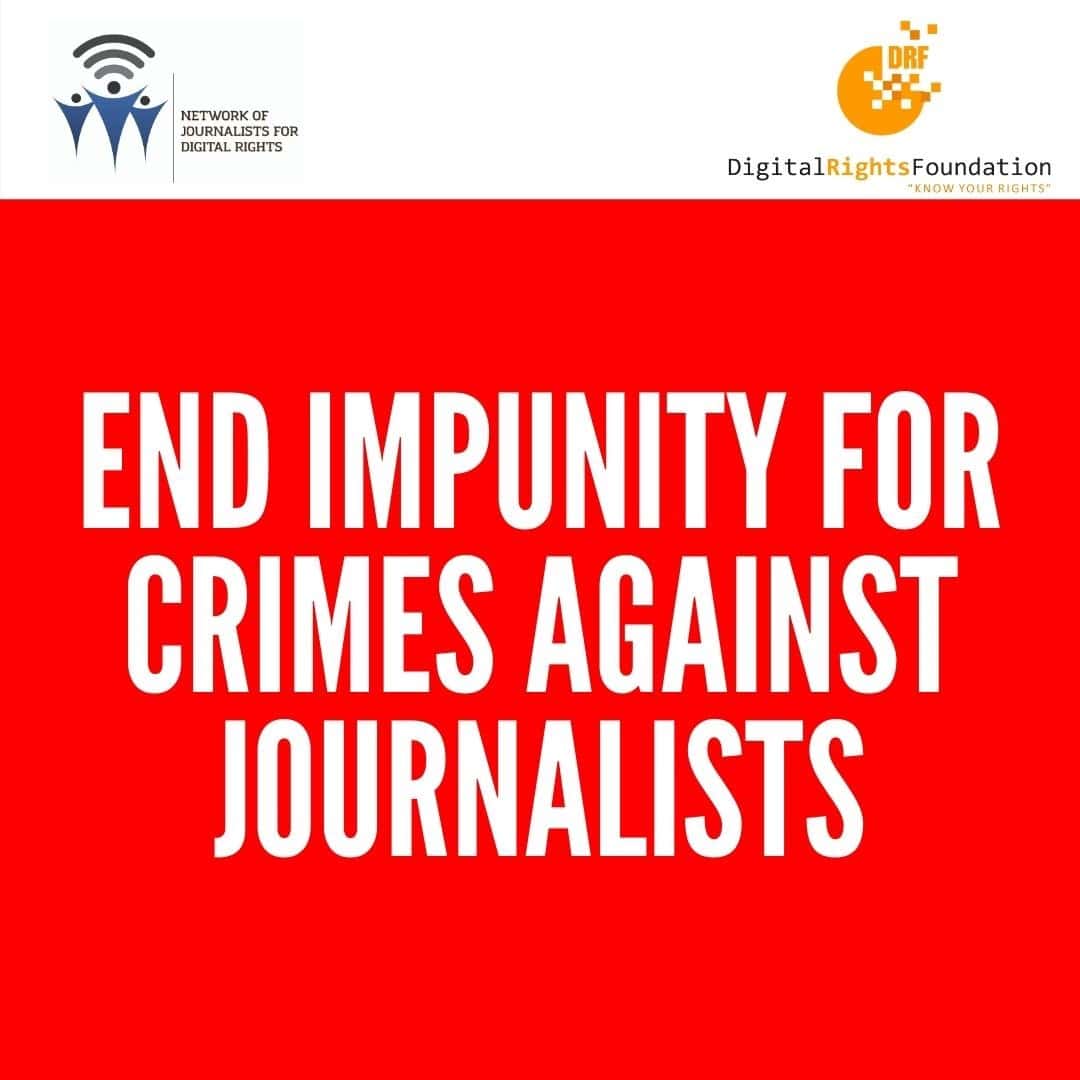 DRF stood in solidarity for the cause of ending impunity against journalists on November 2nd and launched a campaign on social media sharing stories and reports from women  journalists who have faced threats. 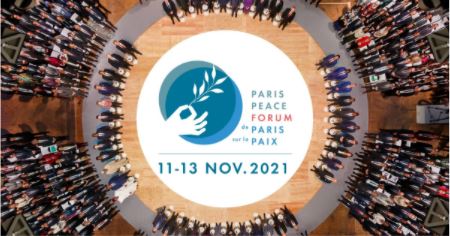 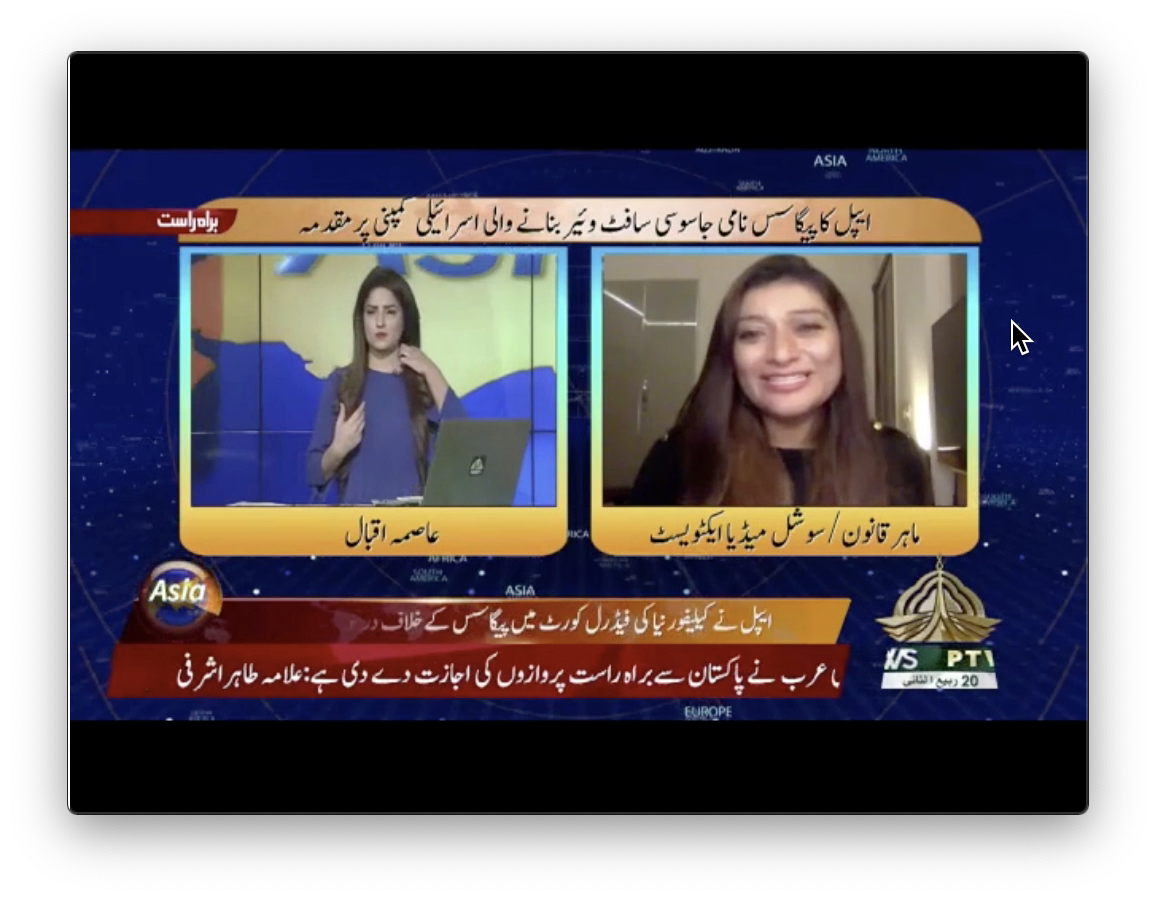 On November 26th, Nighat Dad spoke to PTV News about Israeli firm’s Pegasus Software and the lawsuit filed by Apple regarding the state backed surveillance and unlawful use of Apple users information used by the NSO cyber firm group. 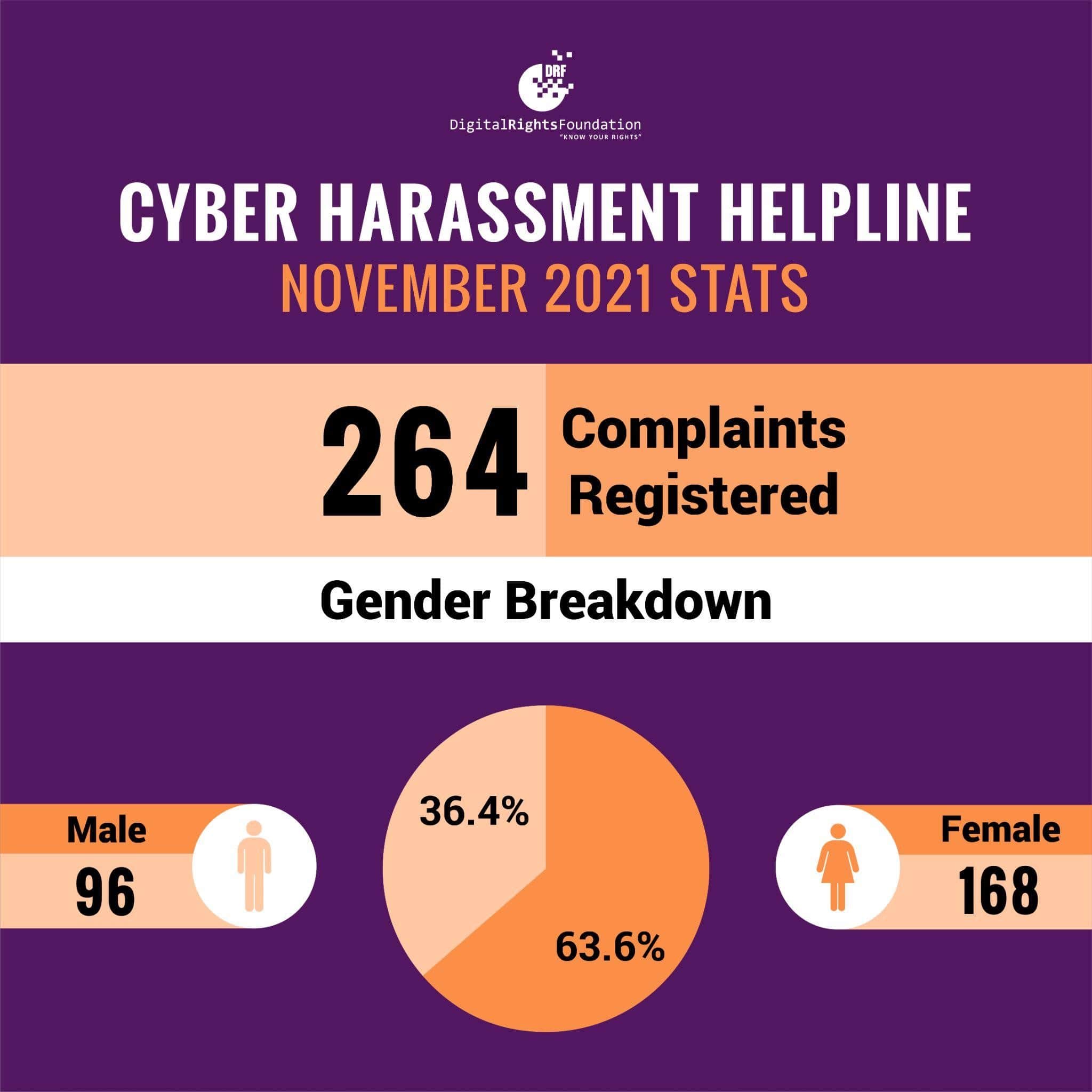 In November, DRF received a total of 264 complaints, with 64% of complaints being registered by women. The trend of women experiencing and reporting a greater number of complaints related to cyber harassment and cyber crime has continued.

DRF’s Cyber Harassment Helpline is open and available Monday to Friday, from 9AM to 5PM. The occurrence of harassment, both online and offline have significantly increased during Covid-19 and our Helpline team is committed to providing victims with the guidance they need to navigate through such difficult situations.

If you or someone you know is being harassed, bullied, or threatened online, please reach out to our Helpline at 0800-39393.

You can even send us a DM on any of our social media platforms. You don't have to suffer in silence!